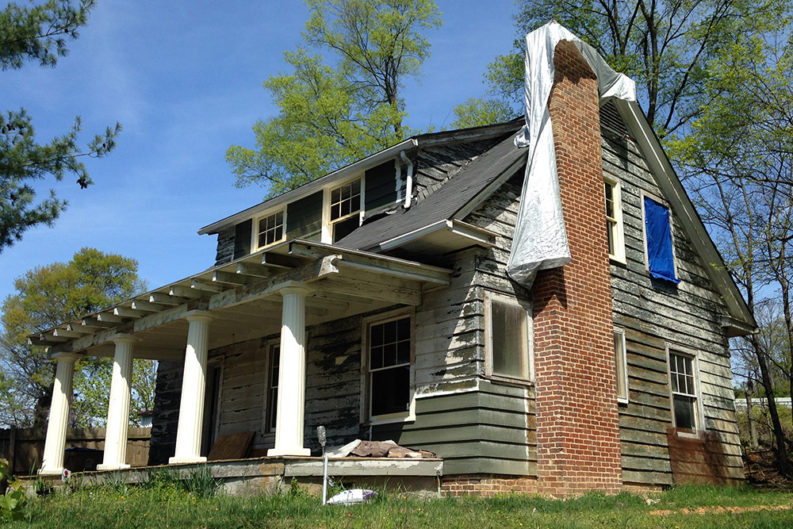 The small two-story house at 1707 East Glenwood Ave. in Parkridge sits a little back from the road, on top of a small hill. The freshly-scraped wood siding is mottled with dark green stain and flecks of old white paint. A temporary electric pole stands in the front yard and sheets of plastic flap against the chimney. Renovation is afoot!

Thanks to the sleuthing of preservationist Greta Schmoyer, we can be pretty sure this plain little 1,100-square-foot house is the work and last home of famed architect George F. Barber, best known for his mail-order catalogs of ornate Queen Anne-style home designs. Though his houses are scattered around the world, the largest collection of Barber homes is found in Parkridge, where the self-taught architect lived for most of his career. Barber moved to Knoxville in 1888 and built a large Victorian home for himself on Washington Avenue, still standing today. His much grander second home on the same street has since been destroyed. By digging through archives and old records, Schmoyer found proof Barber had, for unknown reasons, sold that grand home and was living in the simple house on Glenwood Avenue at the time of his death in 1915 at age 61.

When Schmoyer bought the house in 2014 for $30,000, it was a trainwreck of neglect and questionable remodeling. The wide wood siding was hidden under “hideous” aluminum siding and the unique notched porch rafters were mostly gone, Schmoyer says. Vandals had broken the windows and the roof leaked. The house sat vacant and condemned for 15 years behind a tall screen of weeds. Schmoyer, who lived just down the street, heard rumors the abandoned house had ties with the famous local architect. When the owners put up a for-sale sign, she jumped at the chance to steward a piece of history. 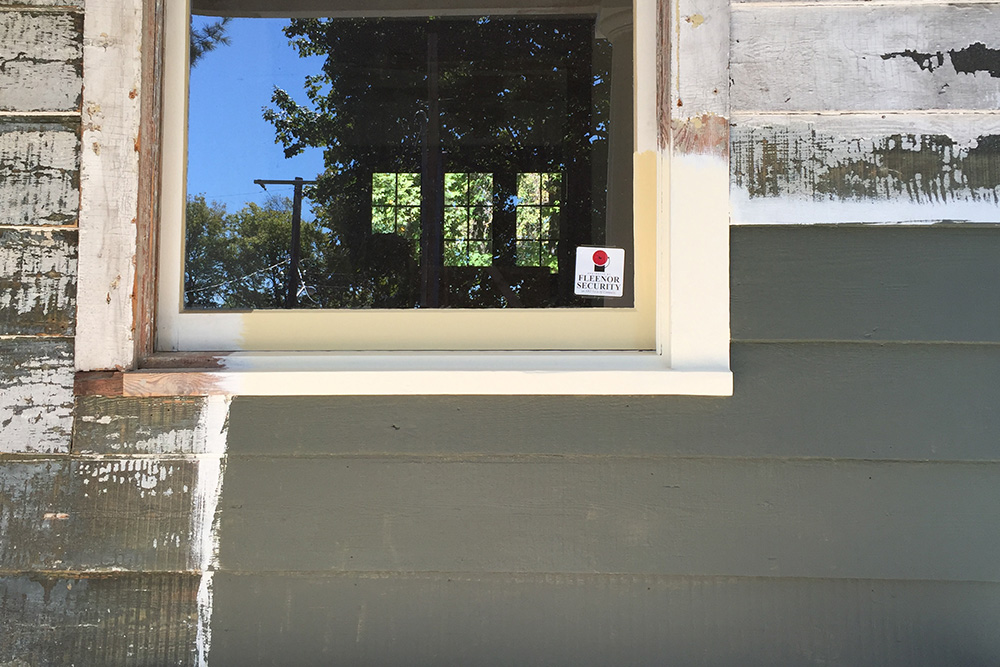 “This is my neighborhood and I don’t like to see old houses being torn down,” Schmoyer says. “Any time you start scratching the surface on a historic project you find so many more fascinating pieces of the puzzle. When we lose any older house, you lose all of those puzzle pieces and people may never be able to put them together again.”

Schmoyer holds a couple of graduate degrees, and works for the USDA inspecting laboratories. She is by habit a thorough researcher, and her interest in the house sharpened the more she dug into its history and construction.

Schmoyer found deeds proving George and Laura Barber bought the land in 1906, and had a house built there. During renovation she found the name “Barber” written on the back of a door casing, as if a lumber mill had marked it with the customer’s name.

Completed in 1913, this house lacks the whimsical elements of Barber’s iconic buildings—no carved spindlework, no storybook balconies. Some features, like its outsized columns, do keep in character with the Colonial revival elements in Barber’s later work. Did Barber design his last home?

George’s son, Charles, also a successful architect, was designing buildings in Knoxville by 1913, but Schmoyer rejects the theory that Charles Barber built her house. 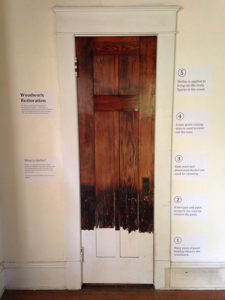 Greta Schmoyer demonstrated the woodwork restoration process for a neighborhood home tour with a partially stripped and refinished interior door, from smudged white paint at the bottom, to final shellac finish at top.

“[George] Barber wasn’t an invalid at that point. His son Charles was an up-and-coming player in the Knoxville architectural field, but his father would have been capable of designing his own house,” Schmoyer says.

The Barbers only lived in the house for two years before Laura died unexpectedly of a stroke. Nine days later, George died as well. Both were fairly young, and neither had been in ill health. George Barber’s official cause of death: “nervous exhaustion, result of worrying over wife’s sudden death.”

“Basically a broken heart,” says Schmoyer, who taped copies of the Barbers’ death certificates to her wall with other historical documents.

Schmoyer hired contractors to replace all electric, plumbing, and gas. She hired a mason to repoint the brickwork and rebuild the chimney. She and her mother, Denise Schmoyer, are doing much of the painstaking restoration work themselves. Schmoyer uses Craigslist and eBay for antique fixtures and obscure materials, and Google to research restoration techniques.

The biggest project the mother-daughter team has tackled thus far has been stripping the interior woodwork. Originally, all the woodwork had a clear shellac finish showing off the natural grain of the wood. When Schmoyer bought the house, the woodwork was thick with many layers of grubby paint.

The Schmoyers heated the paint with a heat gun, which is like a big hairdryer. When heated, the layers of paint loosened, and they scraped off more easily. Schmoyer removed the old shellac underneath with steel wool and alcohol. She then reapplied the historical finish, dissolving flakes of shellac in alcohol and rubbing the product into the woodwork with a rag.

“Shellac is very nice; it’s very bizarre,” says Schmoyer, “It’s made by the lac beetle. It doesn’t protect the wood from water as well as polyurethane, but I think it makes a more smooth, beautiful finish.”

Following an Internet tip, Schmoyer removed all the doorknobs and hinges gummed with paint, and soaked them in a pan on the stove. The heat softened the paint, and she was able to scrub the hardware to a high polish. 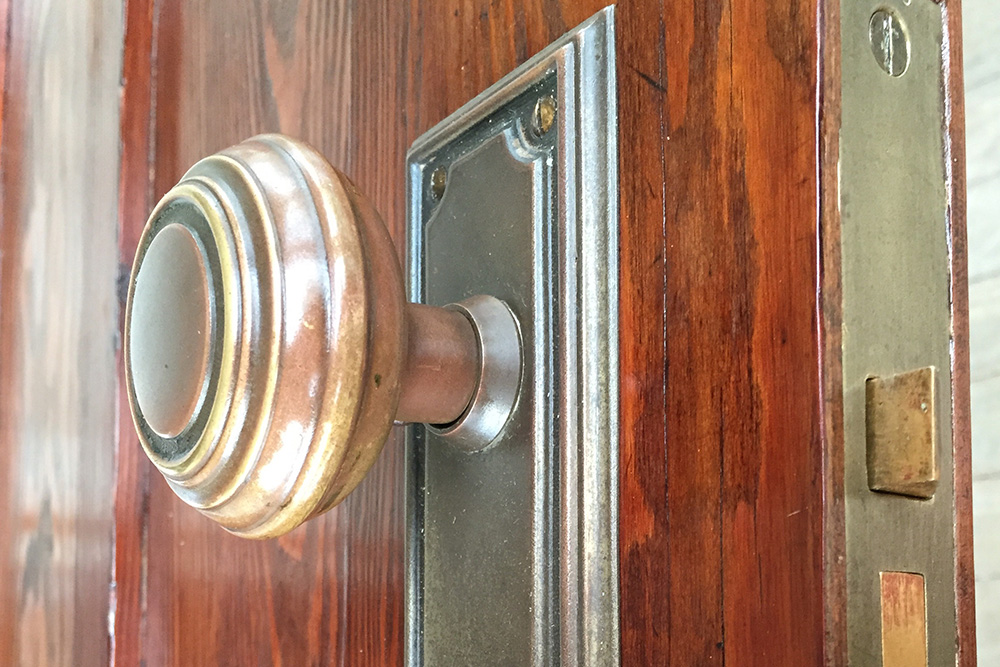 DIY restoration tip: Simmer paint-encrusted hardware in a pot of water on the stove, scrub away softened paint with steel wool for a polished gleam.

“It’s important to bring back our old houses to what they were supposed to look like,” Schmoyer says. “It’s not just an aesthetic thing; the houses were made with stronger materials back then. A lot of the craftsmanship that was employed is no longer to be found at any price. With labor and Googling how to do things you can end up with a finished house that looks like it should, and saves a lot of resources.”

Today, pieces of the house are immaculately finished, but a lot of work remains until it’s livable. Schmoyer is not willing to cut corners on quality.

“If the goal was to finish this house in x number of days so I can get it on the market, it doesn’t become a passion,” Schmoyer says. “Anytime you get really involved in a project you end up falling in love with it.” 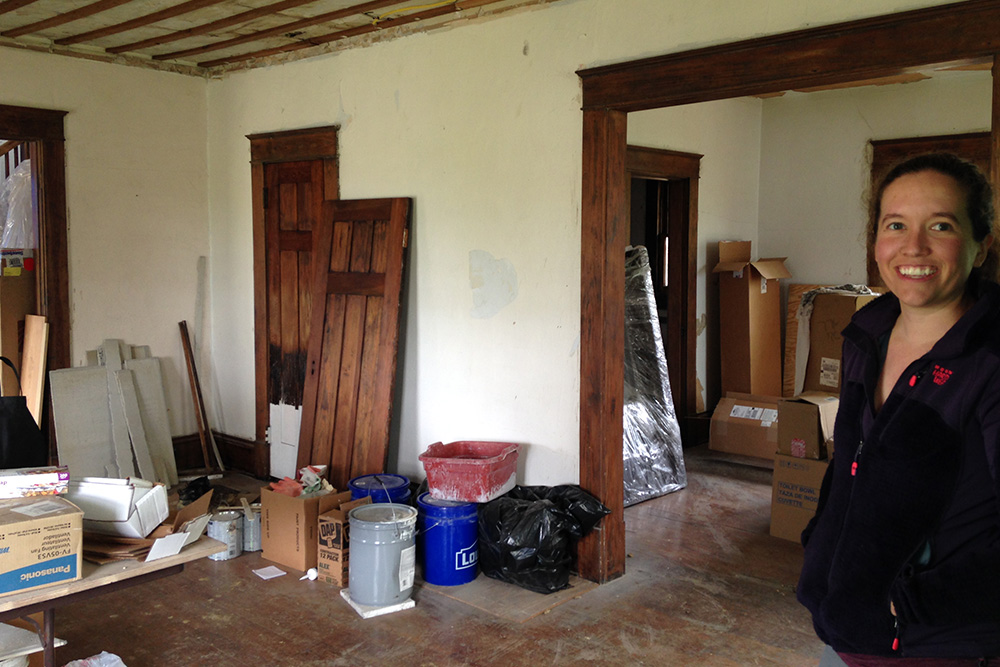