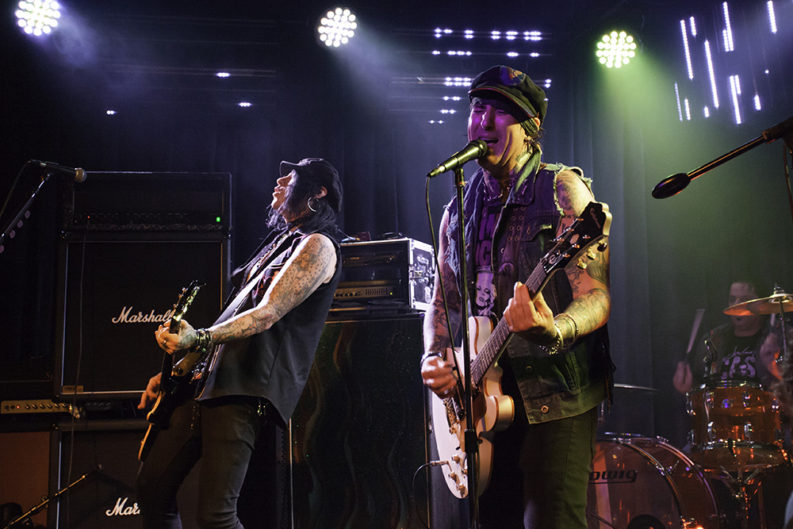 Like Vince Neil on Shout at the Devil, Adam Matthews and Donnie Thunders were too young to fall in love. Smitten with the sleazy six-strings and tattooed excess of Sunset Strip hair metal, Matthews and Thunders found themselves finishing high school in the late 1980s, scant cultural moments before the music they grew up on was swept away in a sea of angst and flannel.

Yet now, the better part of three decades later, the two are finding that they are just young enough—as the Knoxville contingent of pan-Southeastern sleaze-rock act the Damned Angels—to ride an all-new wave of postmillennial glam.

“There’s a bigger underground scene for the music we play than a lot of people realize,” says drummer Thunders, washing down a chicken wrap with a draft beer at a downtown bar. “Everywhere we go, we have people come up to us, thank us for playing some real, dirty American rock ’n’ roll.”

Also featuring guitarist Devin Holiday, out of Atlanta, and singer Scott P, from Asheville, the Damned Angels look like they just got off stage at the Roxy, circa 1981, all black denim and dyed-black tresses and heavy costume jewelry and faded sleeves of tattoos.

Yet for all their seedy retro style, the Angels are more than just some hoary tribute act. Guitarist Holiday’s sleazy, sinuous riffs are at once streetwise and Southern-fried, coming off a bit like Electric Gypsy-era L.A. Guns as reimagined by Alabama Thunderpussy. Vocalist Scott P’s brutal, cauterized yowl sounds much like that of Faster Pussycat frontman Taime Downe, if Downe were to lose half an octave and maybe gargle a teaspoon of battery acid along with his morning mouthwash.

Having formed about three years ago—Matthews says the band members had ties dating back to previous local and regional outfits and pulled together when Scott P set about finding new playmates in 2013—the Angels have recorded only a handful of songs to date, only three of which are available for streaming on the band’s ReverbNation page.

The reasons for that aren’t entirely clear, although Matthews promises that “we’re going to try to get some fucking product out as soon as we can.”

In the meantime, the Angels have been playing all over the Southeast, sharing the bill with ’80s diehards like Cinderella frontman Tom Keifer and the aforementioned Faster Pussycat, as well as with like-minded new bands such as Asheville’s Gutterhound and Nashville’s the Tip.

Matthews says he’s heartened by the fact that the music he loves has found something of a second wind, in the person of neuvo-sleaze acts with names like Billion Dollar Babies and Hell ’n’ Diesel and Lipstixx ’n’ Bulletz and Gasoline Queen.

But what if the hair metal renaissance proves to be little more than a hiccup, a tiny retro blip on the cultural radar?

“It won’t matter,” Matthews says, adjusting his black baker’s cap with a beery chuckle. “This is what I do. I’ve looked this way and lived this way for the last 25 years.”

The Damned Angels play with opening band Tractorhead at the Open Chord (8502 Kingston Pike) on Friday, May 20. Admission is $5.