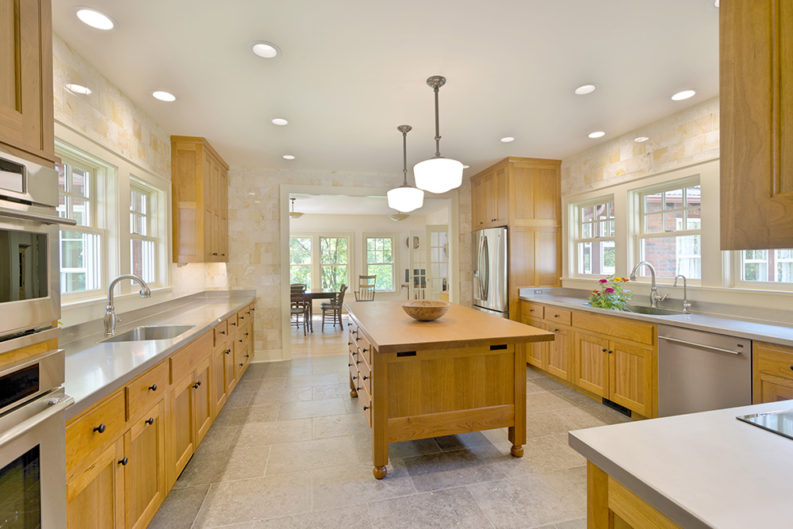 In To Kill A Mockingbird, Atticus Finch famously advises his daughter Scout that, “You never really understand a person until you consider things from his point of view.” That’s true in all sorts of ways. So when Daniel F. Duncan starts to work on a kitchen, he starts by just standing around.

“People think I’m crazy at first, because I just walk in and stand around in the kitchen for a long time,” Duncan says.

Should you engage Duncan in a consideration of your cooking space, it doesn’t take long to learn that he isn’t thinking about cabinets, per se—instead, he’s thinking about your entire kitchen experience, the way that you live and work in it.

One of Duncan’s most recent projects embodies his approach—a remodel of a cramped galley style kitchen in a Fountain City home built in 1929. The owners, desperate for space, had resorted to keeping their microwave at the bottom of the stairs leading to the basement. So, lots of counter space was their first objective—and the best way to achieve that was by adding onto the house; the kitchen is, in fact, an entirely new space. Armed with a rough set of drawings from the architect, Brewer Ingram Fuller, Duncan had an open slate.

“In some ways, this was a unique project in that the owners knew what they wanted, but they were open to some suggestions, too. And they were interested in quality,” he says. “It was also unique because it was a really was a big, well-organized kitchen.”

The new kitchen occupies about 225 square feet, but all that open space is actually more of challenge than it seems. According to Duncan, “There’s an ideal size for a kitchen to make it efficient. So when people start a remodel, they may have too much space, so we may to add an island to make it work.“

In this case the owners’ desire for lots of counter space created a wide-open area that they filled with a large island, which Duncan built with wide drawers and electrical outlets to create both a table space and a storage and work area. He was also able to complete the surface with only two boards, which gives the surface a particularly smooth and attractive finish. 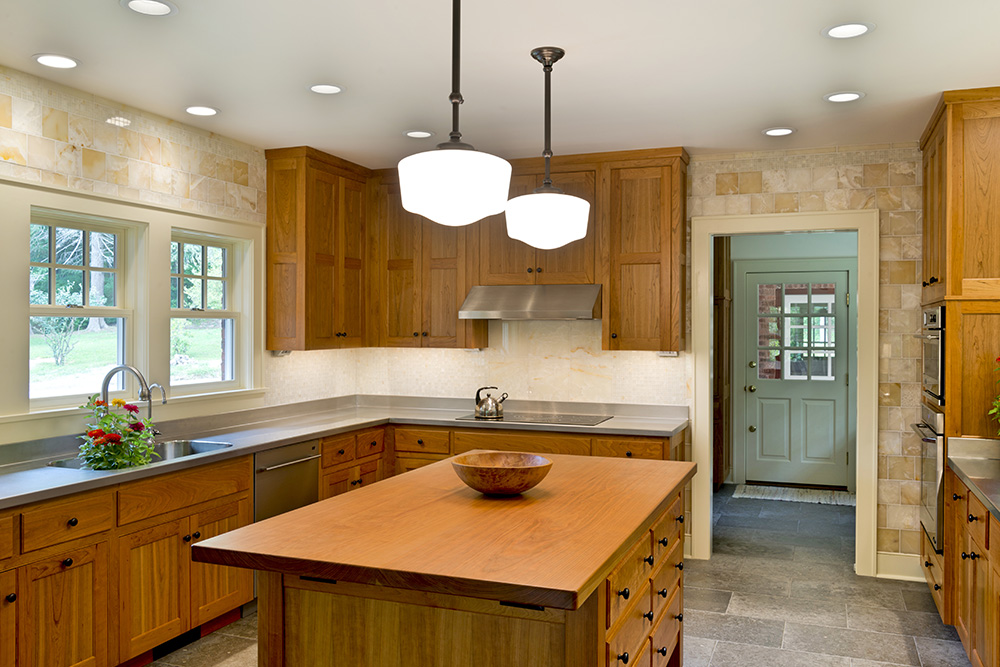 Cabinetmaker Dan Duncan built a custom kitchen island with wide drawers and electrical outlets to create both a table space and a storage and work area.

The cabinetry itself, like the table, is made in a Shaker-style feel from cherry wood finished with a long-lasting conversion varnish, which, as Duncan explains, “has a catalyst that’s added to the finish, so when it goes on it bonds. It’s pretty tough stuff. It lasts for a long time, it’s easy to clean; wine doesn’t get on it—it won’t stain. In fact, it can be used as floor finish so that’s how tough this stuff is.”

The Shaker style emphasizes utility but, Duncan adds, this design is more of a Shaker feel, which “is fairly simple, but there’s a little more pizazz to it.” As an example, he points out the stainless steel countertops (selected by the owners and made by a local metal fabricator, FourSeasons MetalWorks): “I was concerned about the stainless steel with the Shaker style, but it looks pretty good.”

But none of the features detracts from functionality. That’s clear from one of the most useful and nifty aspects of Duncan’s design: a pull-out spice cabinet located beside the oven area that stands almost 6 feet tall. The narrow shelves allow perfect visibility and also have rails that keep all the jars and bottles secure as it rolls in and out of the wall. 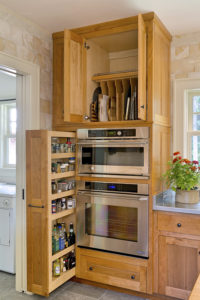 Just above that cabinet and over the stove, Duncan built another wide and deep cabinet filled with dividers that’s extraordinarily useful to the well supplied cook—the slots make order out of the frequent chaos created by the irregular shapes and sizes of cutting boards, serving trays, and baking sheets that never match well enough to nest neatly in a pile.

These features are the result, Duncan says, of long experience: “I’ve done a lot of kitchens and I kind of know what works, now, you have to be flexible if the client wants changes—it’s their kitchen… It’s important [to design] for whoever cooks—the kitchens I design and build are working kitchens.”

Duncan has spent the last 38 years perfecting the approach to his craft. He came to cabinet making while working as a Volkswagen/Porsche mechanic when a customer in need of help with some woodworking inadvertently introduced Duncan to his vocation. He says it was just that simple: “I ended up helping him and quit doing the car stuff. I just got into it.”

From that point forward, it was a matter of on-the-job training. He’s quick to add that, “One thing that most people don’t realize is there’s just no training for this, you can’t go to school for it—you have to do it. And that’s the worst thing that’s happening, it’s harder to find cabinet makers.”

But that’s a search worth spending some time on. That’s especially true if you want a kitchen that really cooks—as this one clearly does.