A Salute to Knoxville's Central Street - The Knoxville Mercury 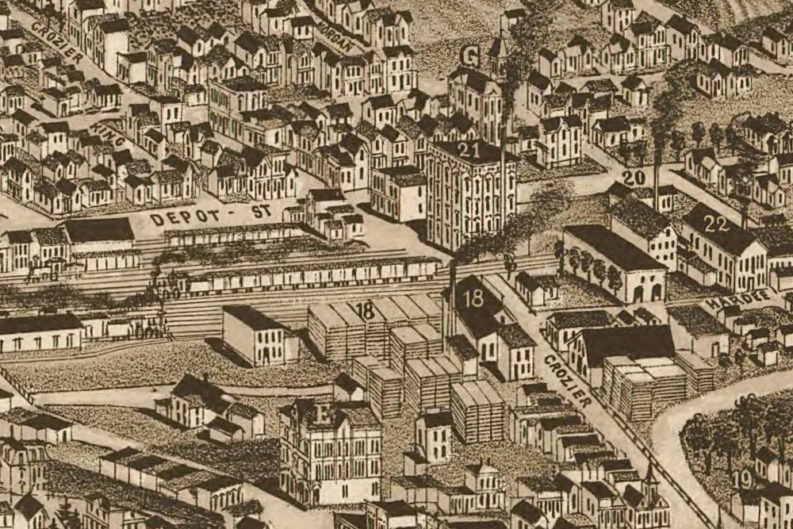 Central Street is the focus of this Sunday’s “Open Streets” festival, when the street turns pedestrians-only for a few hours.

One of Knoxville’s oldest streets, it hasn’t always been called Central. South Central was previously known as Water Street. It was the street nearest to First Creek, and often flooded. It was also known as Race Street, likely a reference to the millraces on the creek.

The Great Flood of March,1867, was the worst flood in Knoxville history, and it was a horror. Bodies of the drowned had to be removed from trees along the street later known as Central.

Downtown once hosted two river wharves, the Prince Street Wharf, which was around the main plaza of Volunteer Landing, just west of Calhoun’s, and the Central Street Wharf, which was on the western bank of First Creek, near Ruth’s Chris Steakhouse. The Central Street Wharf was known as the more industrial of the two wharves, more concerned with cargo than passengers. Riverboatmen who had been on the river for long periods would often come up Central to shop for basic necessities, usually inexpensive ones, to take home to their families. Often they’d also be looking for liquor or women.

During a flood in the 1890s, a steamboat once sailed a few blocks up Central, and moored at a store at the corner of Cumberland Avenue.

Circuses sometimes performed on the Crozier Street Grounds, in the vicinity of what’s now the Greyhound station. Years later, circuses set up at another place about a mile northeast, the North Central Circus Grounds.

Around 1870, Water Street became known as Crozier Street, in honor of Congressman John Crozier, father of feminist educator Lizzie Crozier French. The name had already been applied to a short extension of Water Street north of the railroad tracks.

In 1888, developers in partnership with the city built the Central Market, a farmers’ market to compete with older Market Square. Forming a bent rectangle, it fronted both North Central and Broadway. The Central Market lasted for about a decade, but eventually failed, after charges of unfair collusion. However, it created a pleasant space, and attracted several major businesses, including the Walla Walla Chewing Gum factory. The market site was renamed Emory Park, in memory of Rev. Isaac Emory, who had been killed in the famous New Market Train Wreck of 1904. Knoxville first downtown park, it’s now known as Emory Place.

North Central, a long road that led from the Broadway intersection into the countryside, was known as “Central Avenue” by the early 1880s, before the word was ever applied to any street in downtown Knoxville. But around 1890, old Crozier Street became known as Central.

In 1892, the city standardized its addresses for the first time, with Central as the north-south axis. That standard would eventually be applied to numbering in the entire county. Today, addresses on the eastern and western fringes of Knox County are in the five digits because they indicate their distance from Central.

By the 1890s, Central was a street of saloons, and was known as the Bowery because of its resemblance to the street by that name in Manhattan. South Central hosted more saloons than any other street in East Tennessee.

Central keeps its name as it runs northwest to Sharp’s Ridge. Then it turns into Bruhin Road, and after a confusing turn, it becomes Central Avenue Pike, a mostly rural road that leads out of the county, eventually turning into Heiskell.

Central was the address of some of Knoxville’s most important businesses, including White Lily Flour, whose 1886 factory produced light white flours for a national and even international market for 120 years.

Central was the address of one of Knoxville’s first large “suburban” stores, Sears, which located on Central with a large free parking lot–then a novelty in Knoxville–in 1946. It replaced a park that had hosted local baseball games for decades before.

The low part of North Central, between Baxter and Scott Avenues, was known by the 1930s as Happy Holler. It got that name because it was a pocket business district that offered multiple varieties of entertainment for working people, especially those who worked long hours at nearby Brookside Mill. Happy Holler supported a small movie theater, restaurants, and several bars.

Featured Photo: Crozier Street, soon to be known as Central, from an 1886 bird’s eye view. Few buildings in this image are still standing, but one is the White Lily Flour factory, labeled “21.” (The original Lawson McGhee Library, then new, is now known as the Rebori Building. It’s labeled “E.”) Image courtesy of Library of Congress, Geography and Map Division.