Don't Stop the Presses: Why Hollywood Loves the Newsroom - The Knoxville Mercury 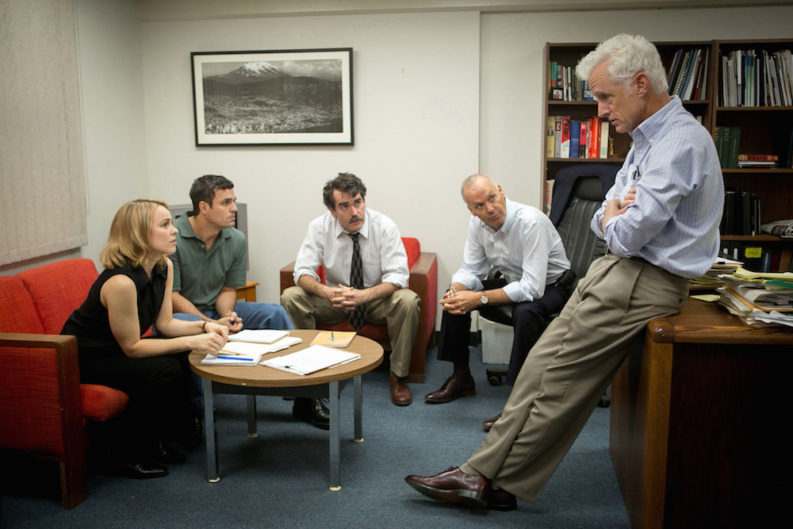 Knox County Public Library’s DVD shelves abound with lives—both fictional and real—that have been improved, maybe even saved, by a competent press. And almost anyone who walks these stacks can name a Knoxvillian who has benefited in some way from unbiased reporting. Be pleased and proud that you are served by this independent newspaper striving merely to be solvent, local, and lasting rather than profitable and easily flipped to the next absentee corporate owner.

Spotlight (2015)
It was considered unusual when Tom McCarthy’s Spotlight won the Academy Award for Best Picture with no other awards won for on-screen talent or production. Typically, there is a performance—before or behind the camera—that makes one film seem better than others. (Spotlight did win a second Oscar: Best Screenplay, for McCarthy and Josh Singer.) So the film won for its story and the manner in which that story was told by the collective cast and creative crew.

The story is, unfortunately, true. It details the widespread sexual abuse of children by Catholic priests and the subsequent cover-up. The investigative team of reporters and editors for whom the film is named reported for The Boston Globe at the turn of this century, and it’s the Archdiocese of Boston that most concerns them. For a successful mainstream film of this epoch, Spotlight is surprisingly quiet and patient. There is no snapping of pencils or pounding of tables, and there are precious few raised voices. Instead there is the somber harvesting of damning testimonies and the painful conversations necessary to confirm them. Micheal Keaton is superb as a senior editor forced to acknowledge that he passed on the story earlier in his career, who must then compensate. Rachel McAdams and Mark Ruffalo are supremely convincing as the stout reporters who must earn the trust of damaged victims and then ask them terrible questions. Having chronicled the failings of bad priests, they find themselves listening and occasionally offering counsel—like good priests. Spotlight presents journalism as an institution both good and fallible.

The Paper (1994)
Ron Howard directed Michael Keaton as an editor 20 years ago in The Paper. Keaton’s Henry Hackett is dealing with understaffing, shrinking budgets, and an issue on the press containing significant errors. With nothing so grave as child abuse in play, The Paper nicely demonstrates how journalism makes an ideal mechanism for clear-cut conflict. The complete truth and its champions must prevail, and any person or circumstance that might interfere deserves our full scorn. It’s a comfortable self-righteousness, especially if you’ve been on that spot—or spend your days on that spot. The Paper holds up, and the role allows Keaton—acting opposite Glenn Close, Randy Quaid, Spalding Gray, and Robert Duvall, all in fine form—full use of his facial and physical comic palette.

Park Row (1952)
Believe it or not, Samuel Fuller’s paean to newspapers is more saccharine than Howard’s. Maybe it’s because Fuller came to film after a stint in print news and funded this film himself. It’s the late 19th century and editor Phineas Mitchell (Gene Evans) is starting a New York daily to compete with the one that just fired him. Park Row is true to the form, with the addition of violence and bullying from the established paper and the patient explanation of dated copy-shop slang, like hellbox and printer’s devil.

His Girl Friday (1940) and The Front Page (1974)
Rehabilitated reporters Ben Hecht and Charles MacArthur wrote The Front Page for the stage. It premiered in 1928 and is revived by just about every generation. It has been adapted for the screen numerous times, most notably by Howard Hawks, as His Girl Friday, in 1940 and by Billy Wilder in 1974. Both films focus on a desperate editor named Walter Burns conniving to retain his star reporter, Hildy Johnson. Wilder stayed truer to the original casting by pitting Walter Matthau against Jack Lemmon. Hawks added romance to the mix by having reporter Rosalind Russell attempting to shed Cary Grant, both as editor and ex. Both classic comedies are mandatory viewing and depict a bygone culture in which chain-smoking, heavy-drinking troops from multiple daily print outlets spar for a scoop—none are above sabotage—and tinker with the truth along the way for maximum sensationalism.