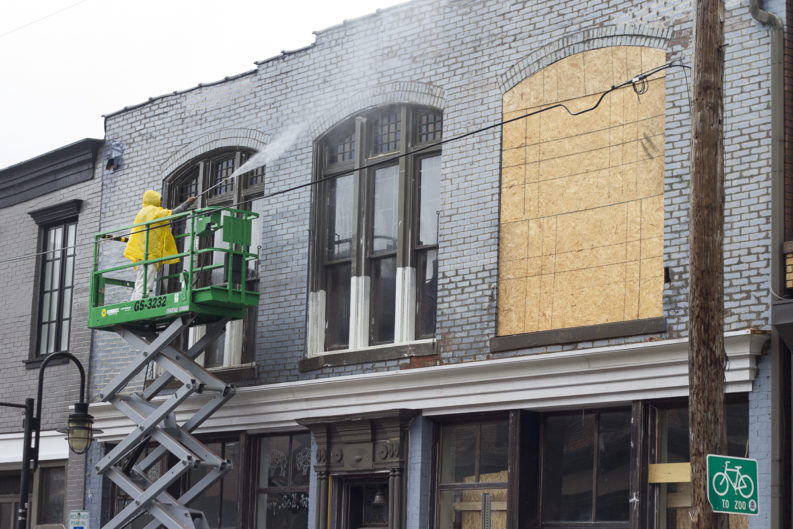 A building owned by Leigh Burch III in the Old City was vandalized overnight with splashes of vulgar graffiti in what a company spokesperson says is likely retaliation for its decision to paint over a long-standing music mural.

Three storefronts of the building in the 100 block of Jackson Avenue were scrawled with white graffiti spelling out expletives, featuring upside-down crosses, and other seemingly random scribbles. Contractors and a shop owner discovered the vandalism this morning. By lunch, most had already been pressure washed into oblivion. 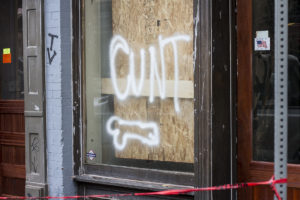 There have been many outspoken critics since Burch had workers paint over a music mural hanging on panels mounted to the side of the building in April. The mural, a Keep Knoxville Beautiful project that was designed and painted by Laurel High School students and artist Walt Fieldsa, had hung on the wall above the Old City Courtyard since 2000. Many people considered it a staple of the neighborhood’s character. The panels, now grey, were also tagged overnight.

Dozens of comments have been posted on a recent Mecury column by Eleanor Scott (published online yesterday) about the mural and other changes happening in that historic part of town, most commenters abhorring the mural’s destruction. One comment from a self-described mother of three said she was excited to hear a children’s consignment store was opening in Burch’s building, but because of the mural fiasco she now planned to avoid shopping there.

Brynn Gonzalez, owner of the soon-to-open consignment shop White Buffalo Exchange, one of the storefronts vandalized overnight, said she understood people’s frustration about the mural, but felt tenants of the building were being unfairly targeted. (Full disclosure: Gonzalez also owns Lox Salon in the Old City, where my wife happens to work.)

“Don’t let other businesses suffer just because the owner messed up,” Gonzalez says, standing in front of her new shop. “I’m really excited to bring this [business] to the Old City and I’m just really bummed about what happened. It’s not much of a setback, but just kind of disappointing.” 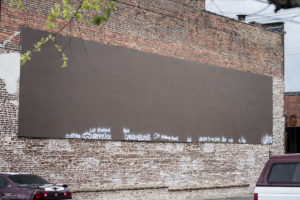 She hopes to open the new store as scheduled next Saturday, May 14.

Savannah Moore, Burch’s property manager, estimates the damage totals a couple of hundred dollars in labor costs, but said overall they were more concerned with the impact on their tenants. Burch is currently out of the country on vacation and was not available to comment.

“It’s not so much the cost of labor but the frustration for our tenants that have had their space defaced–that’s more concerning to us,” Moore says. “I understand people are frustrated with the situation, but this really goes above and beyond tolerable behavior.”

Moore filed a police report this morning after being notified of the vandalism by contractors working to restore the building. She said police were able to collect a few fingerprints from spray paint can lids left behind. They are also checking with other local businesses to see if the culprit may have been captured on video by a security camera.

Knoxville Police spokesman Darrell DeBusk said in an email that most of the remarks scrawled on the building were simple obscenities, but noted one alleged that “Leigh eats ass.” He said he could not comment on what evidence may have been collected. No arrests have been made.

None of the other 150 units Moore manages on behalf of Burch, a developer who has long been active in restoration projects in downtown Knoxville, have been defaced or targeted before, she says, figuring the vandalism must be related to the music mural. Moore also said the media coverage had been overly negative, focusing on the mural’s destruction and not the ongoing work to revitalize three historic buildings that “were crumbling into the street.”