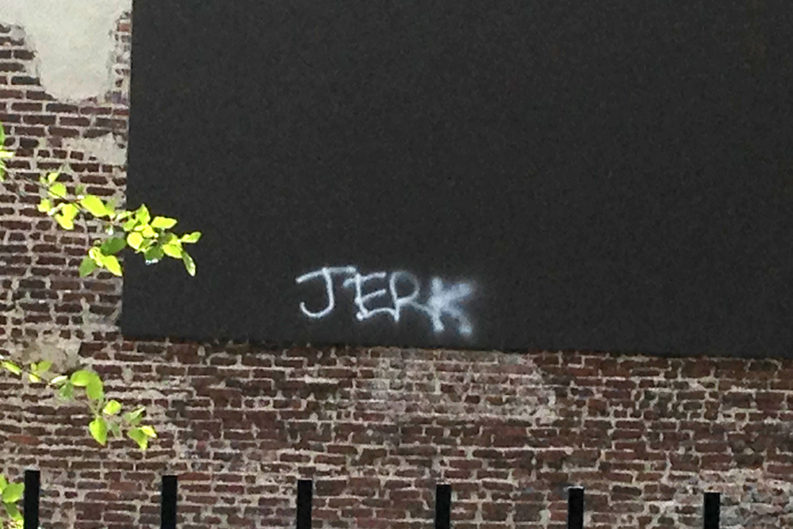 In April, workers hired by landlord/developer Leigh Burch III, of Terminus Real Estate, unceremoniously painted over the Knoxville Music History Mural on the side of the brick building he owns at 118 East Jackson Ave., leaving a blank panel where a colorful tribute to local musicians had formerly been.

The mural, a Keep Knoxville Beautiful project, was designed and painted by Laurel High School students and artist Walt Fieldsa. It depicted over 40 significant players in Knoxville’s vibrant music history, from country star Dolly Parton to jazz pianist Donald Brown and indie/alternative poet R.B. Morris. Early country music pioneers Roy Acuff and Chet Atkins were there, along with country rock ’n’ rollers the Everly Brothers. The mural portrayed the string band the Tennessee Chocolate Drops and blues singer Leola Manning, musicians recorded in the 1929-1930 Knoxville sessions at the St. James Hotel and celebrated this May with the Knoxville Stomp Festival of Lost Music. The 2000 dedication ceremony and concert drew a big crowd, with many of the honored musicians in attendance, including Howard “Louie Bluie” Armstrong, and was covered by Bill Landry for The Heartland Series. In later years, the mural was best contemplated from the patio of Barley’s Taproom and Pizzeria, where beer-sipping locals tried to pick out figures they recognized.

Twenty years ago, Burch was a powerful force in the redevelopment of downtown, with a hand in converting the single-use residential Sterchi Lofts, Learner Lofts, and, more recently, the lofts in the Commerce Building on Gay Street. But the erasure of the music mural is the latest, and most public, of some unpopular changes to the 100 block of East Jackson Avenue since Burch took ownership of most of it in October 2014.

When people learned the mural was no more, the reaction was near-universal dismay. The deluge of comments on social media expressed incredulity that a piece of public art could be destroyed by a single citizen without community input.

Photographer Gary Heatherly wrote, “This was an icon of our musical heritage. … It is morally wrong to cover this up without reaching out to arts groups and discussing alternatives first.”

Liza Zenni, director of the Arts and Culture Alliance, says Burch contacted her a few months ago saying he wanted to “get rid” of the mural. Surprised, Zenni asked why. The mural is listed in the City of Knoxville Public Arts Committee’s collection, and was featured on the Visit Knoxville mural walk. Burch replied that it looked “tired and faded,” Zenni says. Zenni offered to restore or relocate the painting (which was on a detachable panel) at no cost to Burch, but never heard back from him. She was shocked to learn he had painted over the mural.

Savannah Moore, Burch’s property manager who is also acting as his spokesperson, describes Zenni’s comments as “inaccurate information” and says “we don’t know where she’s coming from with that.” In a News Sentinel article, Burch said the mural had been destroyed beyond repair by vandals.

“The community has been deprived of the opportunity to see this alleged damage, to repair it, refresh it, or relocate the mural,” Zenni says.

In a public post on the News Sentinel’s Facebook page, Keep Knoxville Beautiful wrote, “We do not believe that graffiti was the real issue in this case… We condemn Mr. Birch’s [sic] blatant disregard for countless hours of work by the artist, Walt Fieldsa, the artist-assistants from Laurel High School, the four historians who researched the content, the staff of Keep Knoxville Beautiful, and the numerous monetary and in-kind contributions from so many individuals, organizations, and businesses in our community.”

Burch could not be reached for comment regarding the mural, but I spoke to him in March regarding other controversies affecting a smaller, if no less vital, constituency of Knoxville’s cultural scene.

The Pearl closed soon after their building changed hands. An Inside of Knoxville blog post said owner Jamie Johnson decided to close after Burch bought the buildings and “things generally throughout the Old City started to feel different.” Hot Horse closed this March under contentious circumstances.

“Us and the Pearl aren’t as slick looking, and aren’t the ritzy clientele that [Burch] wants,” says Hot Horse owner Ian Lawrence.

The only building on the block not owned by Burch is home to Pilot Light, an indie/experimental music venue in a small yellow brick storefront. Since 1999, Pilot Light has served as a destination for unique touring acts and as a mixing pot and performance space for local musicians. Burch says he tried to buy Pilot Light’s building as well. Given the fate of the Pearl, Hot Horse, and now the music mural, some find Burch’s attempt to buy the Pilot Light building ominous.

Lawrence says Burch forced Hot Horse to close in March due to “emergency construction.” He says Burch unexpectedly did not renew his lease and gave him only a few days to move.

“He was trying to put us out deliberately so he could rent it out to someone more lucrative, even though we paid our rent, never had problems with the business,” Lawrence says.

In response, Burch says, “[Lawrence] was not current on his lease. We were not aware that he wanted to renew.”

In 2010 Pilot Light owner Jason Boardman opened Hot Horse next door to his music venue. At the time, Brad Johnson (no relation to Jamie) owned the Hot Horse building and two adjacent properties. Burch approached Johnson about buying the buildings, and eventually, Johnson agreed to part with them. Lawrence bought Hot Horse from Boardman in February 2015, a few months after Burch purchased the building.

Lawrence crafted an aesthetic and focus for Hot Horse informed by his experience in Knoxville’s independent music community. Lawrence is a longtime fixture on the Pilot Light scene both on and off the stage. His early 2000s band the Cheat and current project Burning Itch often performed there. Lawrence bought records for Hot Horse directly from the musicians performing next door and ordered records with Pilot Light audiences in mind. Given the close relationship with Pilot Light, Lawrence says success in a new location may be difficult.

Last winter, an anonymous caller reported a codes violation on Pilot Light, and city inspectors briefly closed the sidewalk in front of the venue. The Robinson family has owned Pilot Light’s building since the 1930s and show no interest in selling. The owners made the recommended facade repairs and Pilot Light remains in business. Nevertheless, the incident gave Pilot Light regulars a little jolt of fear.

Musician Dylan Dawkins, bass player for the Knoxville indie group Royal Bangs and other bands, recently wrote on Facebook (and in a subsequent message), “Many moments that changed my life … happened at Pilot Light, my home away from home. I’ve watched people grow into amazing musicians, provocateurs, taste makers, and most importantly, friends. One word to encapsulate the way Pilot Light has made me feel every time I walk through its doors: Family.”

Burch’s Old City nightclubs, which he runs with his business partner Duane Carleo, are different animals from Pilot Light. Carleo’s Lounge bills its atmosphere as “an upscale nightlife experience … where Southern elegance meets New York decadence.” Southbound’s website advertises itself as “where the Southern Belles go to get down!” 90 Proof is named after the alcohol content of some liquor. The Wagon Wheel website features young women wearing white bras, cowgirl hats, and the American flag, promoting “good country music and endless red solo cups on Thursdays.”

“[They are] three very successful businesses,” Burch says, “These businesses are economically viable because we found a need. People go to the Old City for entertainment at night.”

Within the dark, grubby interior of Pilot Light there are no TVs, the bar serves low-end canned or bottled beer, and the main focus is on the sound quality of the music. Nevertheless, regulars like Dawkins prefer it.

“I’m pretty appalled by [Burch’s] establishments,” Dawkins says. “They lack a sense of history or culture. They aren’t real places, they are fabricated attractions to try and rake in as much cash as possible.”

Burch is currently renovating the three properties on East Jackson. Future plans for the buildings include a children’s consignment store and a hookah bar. He says the Old City has always been his personal favorite part of town.

“I like the originality of it,” he says. “I like how it is not touristy. I like the architecture and feel. There’s a lot of history. I’d like to see more restoration, construction that fits with the neighborhood.”

Burch’s freshly painted brick storefronts, top-40 nightclubs, and empty 12-foot by 60-foot panel now available for signage do shave off the rough edges, perhaps making the Old City more palatable to casual visitors, weekend partiers, and middle-class shoppers. Meanwhile, history is effaced and authentic character is squandered. It is impossible to manufacture the soul of a place. Ironically, this situation is the quintessential struggle between authenticity and commerce found in places like Gatlinburg, Miami Beach, and tourist traps everywhere.

Correction: The Commerce Building is on Gay Street, not West Jackson Avenue.