What Was Knoxville—and American Culture—Like When the St. James Hotel Sessions Were Recorded in 1929 and 1930? - The Knoxville Mercury 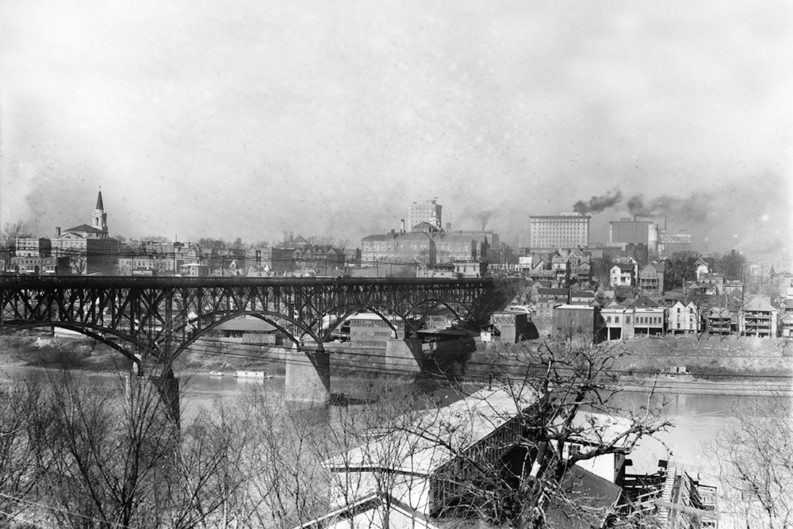 When Dick Voynow, who’d once been the piano player for one of the most popular jazz bands in the world, arrived in Knoxville in the fall of 1929 to make some recordings, the sooty, crowded town noisy with streetcars and ever More automobile traffic could almost pass for a typical American city. Not exactly Southern or Northern, Eastern or Western. Appalachian mainly in theory. There were Knoxvillians who’d grown up in the mountains, but they were outnumbered by the majority of Knoxvillians who had never seen the mountains up close. After years of work, the Smoky Mountains were almost open to the public, but a trip to the mountains was not yet a casual thing. Hundreds of Knoxvillians, including old Mr. Sterchi, who was a key part of the experiment, were children and grandchildren of immigrants who’d never had much association with the hills.

For a lot of folks, Knoxville was just one of those places where America passes itself on the way somewhere else. Its architecture often came from Chicago. Its vaudeville entertainment from New York or at least Cincinnati. Its accents came from all over. In the cafes people who spoke Greek served you versions of the cuisine of Italy, Mexico, Germany.

Cross-country railroad lines intersected here. The new cross-country automobile highways crossed here, too. Hundreds of fresh strangers were downtown every day. The place was maybe a little shabbier than it used to be, maybe, and not as proud a city as it had been 20 years earlier. There wasn’t much new in town, economically, just the old businesses in textiles and hardware and furniture. But radio was new. The city had about three stations by then, and depending on when you tuned in, you were likely to hear almost anything.

That and some new construction, including the grand Tennessee Theatre and the tallest building ever built in East Tennessee—a new hotel called the Andrew Johnson—masked the impression that the city’s best days were behind it. There was a fond hope that tourism to the soon-to-open Great Smoky Mountains National Park would give Knoxville a much-needed boost. Up until about then, the university in town had rarely been an obvious part of Knoxville’s civic life and culture. That was changing as the rage for college football grew with the size of the bleachers at Shields Watkins Field, but most Knoxvillians had never seen a college football game, or had any other reason to set foot on University of Tennessee’s tiny hilltop campus.

In 1930, only a few older folks remembered when Wall Avenue had been better known as Asylum Avenue. But located at the head of Market Square, it was a busy street of dozens of businesses and hotels. The St. James was never Knoxville’s biggest or most luxurious hotel, and certainly wasn’t in 1929, when the Farragut and the Atkin worried about how the giant new Andrew Johnson Hotel would affect business. But it was a clean, respectable place in its early years. Built of concrete, it was hailed as “Fireproof.” Almost always an exaggeration with regard to buildings, the term reflected the anxieties of its earliest years. It was planned just after a famously fatal hotel fire, the “Million Dollar Fire” of 1897, hardly a block away.

If travelers stopped here for the night, perhaps staying at the St. James, the culture they found in Knoxville was mainly American culture. The year-old Tennessee Theatre, like the older Riviera, showed the latest movies from Hollywood—almost instantly, sometimes even before their official release date—along with a bill of traveling vaudeville that had constituted most of Knoxville’s diet of live music for almost half a century. Vaudeville typically offered four performers presented in succession on stage. In 1929, it was assumed that audiences would get restless if they had to watch the same performer for more than 15 or 20 minutes, even if he were a big radio star like Gene Austin, the crooner who appeared on the Tennessee’s stage several times. So they’d switch him out for a magician, an acrobat, a comedian, an animal act. In its first year in business, the Tennessee Theatre, which featured a house organist and, in its early months, a house jazz band, had hosted more than 100 musical acts. Not one of them was a country band.

One thing that made Knoxville different from, say, Akron or Des Moines or Tucson or Providence was something that locals encountered just occasionally, when they went to the train station or shopped on Market Square. Singers and fiddlers and guitarists and harmonica players, many of them blind, playing old-time laments about horrible murders and senseless disasters, for buffalo nickels. Some were from the hills, and some of their songs seemed very old, even when they were unfamiliar.

Lately, more and more people—maybe by 1929 most people—had radios, and listened to America’s ever-changing soundtrack at home: Jazz dance music, Broadway show tunes, the Gershwins, Jolson, Louis Armstrong, Rodgers & Hart, Cole Porter—and if you tuned in at the right moment, some of them could also hear some country, now and then. In 1929, since the popular Victor recordings in Bristol two years earlier, there was more country music for sale on 78 than ever before in history.

It would be hard to argue that the St. James Hotel sessions of 1929 and 1930 were influential. The few that were commercially released were never broadly popular. They were almost forgotten. Even some of the musicians themselves forgot, or never mentioned to their family and friends, that they once made a record.

It’s possible that some musicians of the 1930s heard one or more of them—like Ballard Cross’ early version of “Wabash Cannonball,” one of the first-ever recordings of the iconic country song—and built on them. However, the St. James cuts weren’t well known even in their own time. They have almost certainly greeted more ears in the last 20 years, by the dozen or so that made it onto CD compilations of historically interesting music, than they were in the 20 years after they were recorded.

But the sessions form a rare core sample of American culture in a critical time and place.

Popular music as we know it today was hardly more than a toddler. Radio was less than a decade old. Phonographs had been around for decades, but record companies, which originally concentrated on classical, opera, and religious music, had begun releasing blues and country recordings just five or six years before. Common terms like “country music,” “swing,” “bluegrass,” and “rhythm and blues” were unfamiliar in the popular-music market. These were concepts still developing. They’d be known soon, but were strangers in 1929.

Jazz was still new, a genre mainly concerned with dance music. Louis Armstrong and Duke Ellington were its young practitioners. The “big band era” had not begun, but bands were getting bigger, sure enough. Maynard Baird’s tuxedoed Southern Serenaders were a smooth, upbeat orchestra popular at the country clubs and hotel ballrooms and at weekend shows at the Riviera. They sometimes toured the north, where they had fans even in New Jersey who, late at night, could pick them up on Knoxville’s WNOX.

Country music existed, but it was usually called “hillbilly” or “folk.” Everybody knew of it, but it had only occasionally been recorded. Jimmie Rodgers and the Carter family, still new names to most folks, were making successful records. The Grand Ole Opry, until recently known as “WSM Barn Dance,” had existed as a Nashville show broadcast from a small studio at WSM since 1925, but it wasn’t yet well known as far away as Knoxville. Nashville, the Athens of the South, had no reputation as a recording center.

Banjo player Uncle Dave Macon, who’d often played vaudeville stages in Knoxville, and was already something of a star on the minstrel circuit, was becoming a regular on WSM. But when he wanted to make a record, he dealt with Knoxville’s Sterchi Bros. Furniture. And even he came to see Mr. Voynow at the St. James.

In 1929 nobody had ever heard of Bob Wills or Ernest Tubb. Hank Williams and Chet Atkins were little kids. Even Roy Acuff’s name was unfamiliar—except in Knoxville, where, at 26, he was best known as a former baseball player who’d lately been having some health problems. He didn’t show up at the St. James Hotel to make records. He was just learning to sing and play fiddle. It would be a couple more years before he was ready to play for a general audience.

The St. James sessions caught American popular-music culture just at the brink of major change. If these recordings had been made five years later, they would have sounded different. Things were changing fast, and the sessions caught a moment or two like a high-speed camera.

Knoxville, despite its cherished reputation for remoteness, was right in the middle of all of it—the East and the West, the North and the South, the old and the young, the black and the white, the rich and the poor, the city and the country. They often opposed each other, set themselves apart from each other, but sometimes they combined.

The city’s population in 1929 was denser than it is today. The city’s westernmost neighborhood was the brand new and still developing subdivision called Sequoyah Hills. Cherokee Country Club was still in the country, outside of city limits. But all 105,000 of those people who called themselves Knoxvillians lived south of Sharp’s Ridge, east of Bearden, west of Chilhowee Park. People lived closer and encountered each other more often. All classes, from the working folks to the moneyed elite, rode the streetcar. Though segregation was the law, blacks and whites often encountered each other, perhaps more than today. It’s not surprising that Willie Seivers, a young white woman who played an unusual style of lead guitar for a family band, would have learned the blues from a young black man playing on the sidewalk at Central and Jackson.

That’s a story we know only because she and Howard Armstrong, who half a century later would be subject of documentaries, both lived long enough to tell it. Most of the performers who tried the microphones at the St. James didn’t live that long. Some vanished altogether, leaving us to guess what became of them.

For dozens of musicians, and for some strains of music, these recordings are rare evidence.