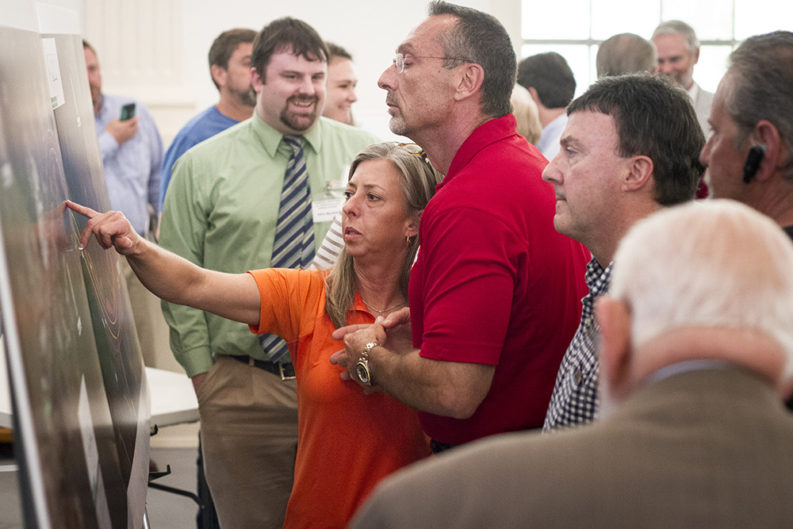 It’s not often that meetings of the Tennessee Department of Transportation turn spiritual, but for the approximately 200 people who filled pews at Valley Grove Baptist Church in South Knoxville on Thursday, April 21, the issue at hand was one close to many hearts—one that has affected most of them personally and, in some cases, claimed the lives of friends and loved ones.

The Rev. Keith Vaughan welcomed the crowd at the start of the meeting, leading a prayer that focused on a common goal for those in the audience and the dozen or so TDOT officials at the meeting: to make Chapman Highway a safer road.

“I can’t tell you the number of times I’ve just said a prayer and held on,” local resident Darius Hawkins told TDOT officials, describing the turn from Chapman Highway onto Simpson Street.

The crowd was gathered to hear about the latest of four safety improvement projects planned over a 10-mile stretch of Chapman Highway. Within the last 10 years there have been more than 240 accidents with injuries on that length of road, including five fatalities, mostly due to the road’s winding configuration and natural barriers, TDOT Region 1 Director Steven Borden told the crowd.

“When you build in East Tennessee it’s really expensive. [That’s because] you’ve got a hill on one side and a creek on the other in most cases,” which holds true for much of Chapman Highway, Borden said. In all, the four improvements projects are estimated to cost a total of at least $33 million.

This particular project would widen a one-mile stretch of Chapman Highway from just south of Simpson Road to Hendron Chapel Road, making room for a center turn lane, increasing visibility, and widening the shoulder. The plan also calls for decreasing the speed limit from 55 mph to 45 mph. The crowd heard designs plans for those improvements last Thursday night.

TDOT officials say they hope to start acquiring rights of way for the project in the fall, after public comments are collected and the design plans are finalized. That process could take 12-14 months, and construction could start by early 2018. Anyone interested in weighing in on the plans can submit a written comment to TDOT before May 12 via email at tdot.comments@tn.gov or by snail mail to Project Comments, TDOT, Suite 700, James K. Polk Building, 505 Deadrick Street, Nashville, TN 37243.

No one spoke in opposition to the plans during the meeting, though several people called for more to be done sooner. “How about making an immediate impact and lower the speed limit right now? It’s dangerous conditions out there,” local resident Terry Guyse said.

Mike Jones has lived on Pickens Gap Road for 30 years and travels Chapman Highway almost daily, “and you know how dangerous that is!” he said. “We’re concerned because we live it every day, and we hold our breaths sometimes. You sit there and think in the back of your mind, why do we not have the James White Parkway extension? That would take a lot of the traffic off Chapman Highway.”

Public input during the meeting was limited to comments on the design for this segment of road work, but James White Parkway was the elephant in the room. Several people said after the meeting that they favored extending the parkway from downtown Knoxville to Seymour in order to alleviate traffic on Chapman Highway.

“We’ve all lost loved ones on this highway,” said Brenda Cunningham, a longtime resident of Seymour and advocate for the extension. Plans for the extension were essentially killed in 2013 when, in response to lobbying by Knoxville officials and neighborhood advocates, it was removed from the regional transportation planning organization’s list of approved projects. The extension, they said, would slice through the Urban Wilderness and divide some South Knoxville neighborhoods.

Last month TDOT Commissioner John Schroer reignited the debate when he argued in favor of the James White Parkway extension during a luncheon in Knoxville, saying the planned safety improvements along Chapman Highway wouldn’t do enough to protect motorists. Knoxville Mayor Madeline Rogero, in turn, stood by her opposition to the parkway.

TDOT ceased work on the parkway in 2013 after it was removed from the TPO’s list of projects, a requirement for any road work. “We’ve completed a portion of the environmental documents, but after a certain time frame we’ll have to go back and redo those evaluations,” if the project is ever revitalized, Regional Director Borden said. “When we design a project we’re looking at the next 10, 15, 20 years. Seymour is a huge growth area, and that’s just going to continue.”

So far TDOT has spent about $250 million on the James White Parkway, which crosses the river from downtown and dead ends a short distance into South Knoxville. The highway only made it that far in part because of the way transportation projects are funded in the state. By state law, TDOT cannot take on debt or sell bonds for road work or other transit projects—a “pay as you go” system. That lightens the burden on taxpayers since they’re not paying on debt, but also means some needed fixes along dangerous roadways like Chapman may be kicked down the road for years until funding becomes available.

Even now there’s a chance these four planned projects along Chapman Highway may not be completed—it all depends on funding. TDOT takes it a step at a time, allocating money for each stage of its process: planning, then environmental reviews, design work, right-of-way acquisition, and finally construction. Right now the agency has guaranteed enough money to finish design work on the segment between Simpson and Hendron Chapel roads, and officials say they’re optimistic that funding will come through for the rest of the steps and other projects. Compared with just six months ago, TDOT transportation funding is a bit more consistent than is has been in years past. That’s because Congress in December finally agreed on long-term transit funding. Tennessee received about 53 percent of its infrastructure budget from the federal Highway Trust Fund in fiscal year 2013, according to a recent TDOT report.

TDOT’s annual budget is up some this fiscal year as a result, $965 million for fiscal year 2016-17 compared to $660 for the current cycle ending in June. A chunk of that will also go towards the renovation of Alcoa Highway from downtown Knoxville to the Blount County line, a plan that has drawn some criticism, as the Mercury reported in December, because it took priority over work on Chapman Highway even though Chapman saw nearly three times as many accidents as Alcoa between 2012-2014. In November the state reported a backlog of 181 transit projects that likely would be funded until at least 2034, plus another 765 new projects that won’t be considered until 2022 or later.

Featured photo by Clay Duda: Allen and Renea Preslar, of Seymour, examine renderings of planned roadwork during a TDOT public meeting on April 21, 2016.