Yung Life Grows Up on 'Soft/Divide' - The Knoxville Mercury 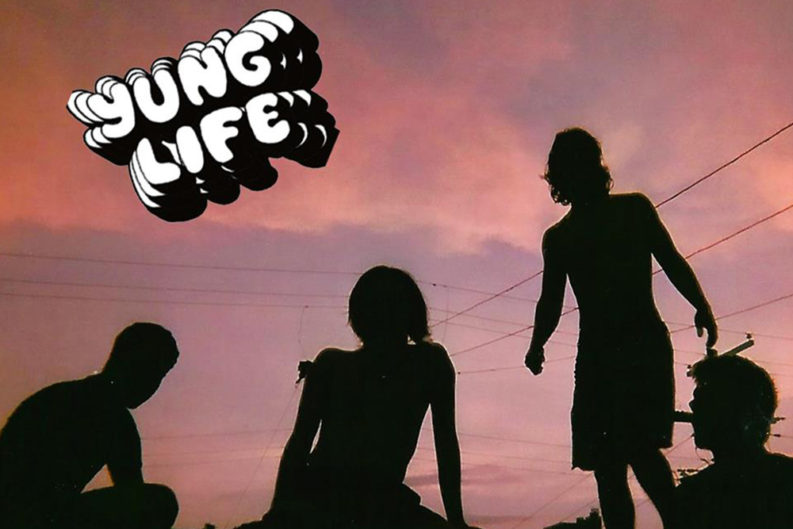 For most of its eight-year existence, the aptly named Yung Life has been a hobby. That didn’t keep the members of the band—Elliott White, Gabriel White, Judah White, and Will Farner—from releasing two appealing albums of retro synth pop, but stuff like high school and college took up most of their time. Now that three of them have graduated from the University of Tennessee, they’re ready to make a more serious commitment to the band. The first step is the release of their ambitious and long-gestating third album, Soft/Divide, which serves as the next step in the band’s creative evolution. The band got together last week to collectively answer some questions about the new album via email.

It’s been four years since you guys released Yung Life, and it seems like there have been on and off periods where you didn’t play many shows. Can you fill me in on what’s been happening? You have been playing a little more frequently the last few months, right?
We released the self-titled album in 2012 and toured a lot that year and in 2013. Collectively, we all decided to finish up our college educations, which obviously put us in a position to be less active as a band than we were used to. In 2013 and 2014 we all lived together in the same band house, where we wrote a lot of new music and played together and explored new musical grounds. We haven’t been playing any out-of-town gigs over the past couple years, though.

The album was a long work in progress, with many frustrations and constraints with us still being in school and having busy lives. We really liked what we made and we wanted this album to reach more people than the previous two. We contacted people we knew and people we wanted to know, to see if they had any words of wisdom in finding national support for our record. It was frustrating to waste time on potential doors opening for our band and it seemed futile to keep drawing that period of time out when we are coming up with newer material and just sitting on a lot of stuff. We decided to self-release the album and just get it out there to see how it does.  Hopefully people like the music enough to spread it.

Besides living together as a band and finishing up school, we also played music in some other bands as outlets. Will started a cool band called Velvet King with some friends and Elliott plays drums with that group. Gabriel and Judah also were in another band called Crowd for a little bit. These other projects were cool ways for us to keep playing shows and explore music with our friends while we sat on the album and kept working on Yung Life.

When you started out, you were pretty precocious—weren’t some of you still in high school? I imagine your lives have changed quite a bit over the last five or six years.
Yeah, Elliott originally began the band in like 2008 or something, then Will started playing with him, and it’s been the four us since 2012. So it started in high school and now college has wrapped up for everyone but Judah. He is the youngest and started playing with us when he was in high school while the rest of us were in college.

Our lives have changed a lot since then, but the roots of our band haven’t really changed. We look forward to pursuing the band a lot harder now that we are freed up from school. The whimsical nature of being in a band has leveled out a bit as the real world sets in, but we have a ton of fun playing music with each other and that won’t change. The album Soft/Divide is appropriately titled for our band because over the years we’ve made a soft divide from the music we’ve been making, our live performance, the direction of the band, and in our personal lives and relationships.

The new stuff sounds like a pretty serious effort—not in tone, necessarily, just a step up in songwriting and production from the last album, like you’ve finally defined your sound and what you want to be.
All of us wanted to make an album but we were really busy and we thought that one person would have to carry the bulk of the weight regarding writing and recording. It just so happened that Elliott had a lot of creativity for a new album and took the reins in making it. Originally, the band was conceived by Elliott, so he has the clearest vision of what we are. We’re really into experimental sounds, heavy rhythms, and layered beats. Elliott obviously has a knack for creating those kinds of things, so we let him have at it.

We deviated from the ’80s pop sound that our self-titled album has, and in a way deconstructed synth pop and synth sounds on this new album. We all were involved in recording the album and made collective suggestions to song structures and melodies.

The album is the most well-produced group of music we’ve made and relies heavily on homemade sampled sounds. The title Soft/Divide also relates to where we are as a band and how we, as so many bands do, were relying heavily on digital sounds made on the computer.

Technology and computers are very useful tools for samples during a live show, but as we were learning the album to perform live we decided to no longer use a computer or samples during our live sets. We won’t be using laptops on stage anymore and want to focus on creating organic sounds like bands used to do. It’s the same ideology behind the growth of cellphone use and reliance on technology. Although they are extremely useful and can make a lot of things easier for people, they take away from human interaction and human skills. We’ve learned to strip our band down to the basics and just keep it simple. If we use any samples in the future, we’re going to use an analog tape rig onstage.

We wanted to make a work of art rather than a purely sing-along album. Presenting the album as a piece of art will help us tie in new things to our band so we can expand on being just a group of musicians. We are including a lot of Elliott’s artwork with the album. Each song has a painting to go along with it, so there will be 14 pieces of art and a fictional story to read with the album. It’s a conceptual album and it’s going to be exciting to offer additional art to the music and really take being a DIY band to the next level.

Tell me about writing and recording the album. Has some of this material been in the works for a while? Where did you record it? Did you use an outside producer? How much time did you spend working on it, from writing to recording to post-production?
The material has been in the works for a while—the bulk of the album’s songs were written and recorded in 2013. The majority of the album was recorded at our parents’ houses, where we had access to more instruments and abundant silent space to work with.

Elliott made a lot of the demos for the album on cassette and wrote them by himself on the same tape machine he used back in 2008 and 2009. The finished demos were then rerecorded onto a computer. Since the album was made on a laptop we worked on it in many different environments. We recorded some at Will’s mom’s house, vocals in the back of our van in the Great Smoky Mountains, some drum tracks in the desert, vocals in a friend’s isolated Oak Ridge home, more stuff at our band house, in classrooms, bathrooms, and various basements.

We produced the album ourselves and would often all sit around our home studio and make group suggestions on the production and song arrangements. All four of us really enjoy recording and producing music, so it was a maximum group effort of combining our skills when tracking and mixing the songs. Our prior album was made when we were first learning how to use recording software—this one exploits that same software to a much greater extent.

By the time we had a rough draft of an album it was almost like we bit off more than we could chew, and it literally took a couple years to polish it into what we wanted. We wrote, recorded, produced, and mixed the album ourselves. Certified sound engineer and lifelong friend Cameron Crowson tutored us and helped us achieve out-of-the-boxI think he means “outside the box”? analog sounds and even involved a reel-to-reel tape recorder into the recording process. The local sound genie Seva, from Soundcurrent, did the final mastering this past winter. All in all, it’s taken about four years to finish since we started it.

What are your plans after the album release—are you touring or hitting any festivals this summer? A local release party?
We’re planning a local release show in late May with Sweet Years and will be touring in the summer. Besides that, who knows about festivals or bigger shows. We have big ambitions ahead of us, though.