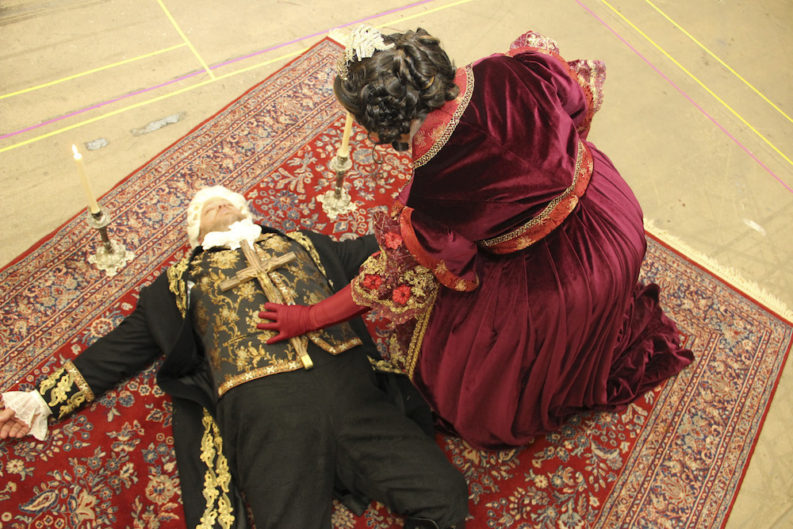 On your first full day as a visitor to Rome, you’ve just taken in the ancient Pantheon and its awe-inspiring dome, after which you’ve splurged and enjoyed an expensive cup of coffee while people-watching in the nearby Piazza Navona. Wandering south a block or two, to the Corso Vittorio Emanuele II, you discover a beautiful basilica church dating from the early Baroque, the Sant’Andrea della Valle, and step inside to view its beautifully frescoed dome and lavishly decorated vault ceiling.

Outside again and feeling the need for a bit of lunch, you turn left and walk a hundred yards or so and make another left on the Via Dei Baullari, seeing a plethora of shops and cafes ahead. Within a minute or two, you pass through two plazas rimmed with cafes and filled with merchandise carts and stalls. Your walk ends a bit further at a third plaza, fronting an imposing Renaissance edifice, the Palazzo Farnese, which you learn was once a private palace but is currently the site of the French embassy.

Just what is the significance of your five-minute stroll from the church of Sant’Andrea della Valle to the Palazzo Farnese? You’ve just walked between the actual existing locations of Act I and Act II of Giacomo Puccini’s opera Tosca.

Next weekend’s production of Tosca by Knoxville Opera, on Saturday, April 30, will be the company’s first staging of the opera since 2008, but you won’t find it at the Tennessee Theatre. Or any theater, for that matter. KO executive director Brian Salesky had a different idea.

“I always thought—and this is a purely romantic notion—wouldn’t it be amazing if one could actually perform Tosca in the real places? What would that feel like? In Rome, the church and the palace are literally a five-minute walk apart, and then you’ve got the Castel Sant’Angelo of Act III, which is 10 or 15 minutes down the block,” Salesky says. “It’s very easy to get between these places. And when you do this, knowing the timetable of Tosca—Act I is at noon, Act II is that evening, and Act III is at dawn the next morning—you can begin to understand what this would have been like for these characters.”

Unfortunately, Knoxville Opera is not transporting its Knoxville audience to Rome. But they are attempting something a bit more economically viable: performing Tosca in real downtown Knoxville locations, all within walking distance, and with orchestra, sets, and lighting.

“Once we got approval from the church, we determined you can stuff—and I mean stuff—700 people into the interior. That means putting the audience on the floor, in all three balconies, and in the chancel. Every audience member is going to have a different experience of the opera, because the opera takes place everywhere—in the back of the church, in the aisles of church, on the side. It’s going to be a very exciting adventure. Now, I’m not trying to tell anyone that this is what Puccini had in mind to do, but I thought, let’s do it.”

Choosing a location for Act II presented Salesky with a dilemma: Where, in walking distance of the church, can you theatrically stage the scene of Baron Scarpia’s residence and still seat hundreds of people? The Knoxville Convention Center was large enough but it had to be ruled out because of booking limitations and the fact that the facility’s spaces are not acoustically isolated from each other. The only other choice was the older Exhibition Center that fronts the World’s Fair Park North Lawn. But that space came with its own set of problems.

“The KCEC is not designed to be a performance space,” Salesky says. “It’s really just a trade show space. So we’re setting up a stage; the orchestra will be on the floor next to it. Until we get into the space, we won’t really know whether it’s fabulous or not.”

Presenting Tosca in a traditional way as far as characters and music, but in a different way for the audience’s experience, has risks and rewards.

“I think it will be a very positive thing for our audience, because without the audience experience, there’s no reason for Knoxville Opera to exist,” Salesky says. “The last thing anybody in the theater business wants to be is boring. Not only should this Tosca be theatrically exciting and musically satisfying, but it should be an experience that the audience will remember forever.”