Outdoors Etiquette: How to Not Drive Other People Nuts in the Wilderness - The Knoxville Mercury 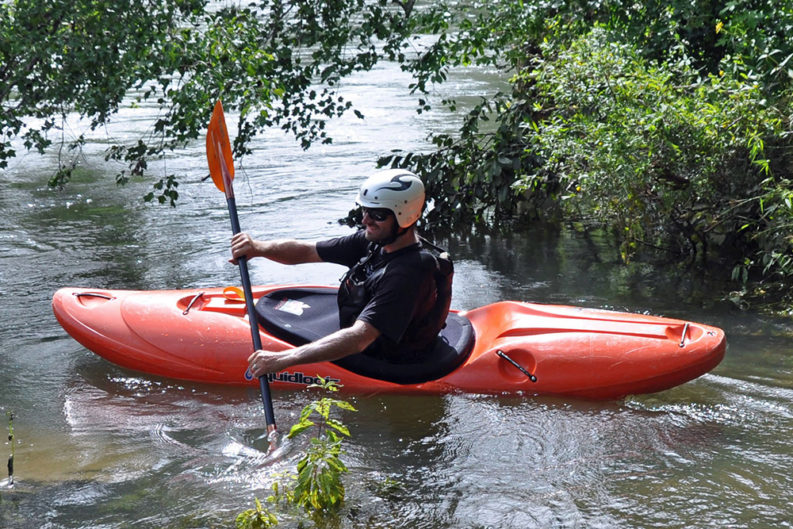 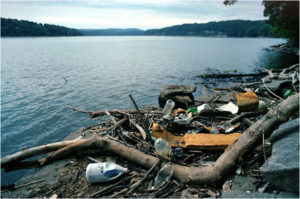 Many of us covet the notion that once we get into the wilderness there are no rules and we can go crazy and be our sloppy selves without inhibitions or worries about the feelings of others, human and non-human. And then we see a toilet seat hanging from a bush on the side of a beautiful river, as I did on the lower Cumberland, and we reconsider what freedom in the wilderness means (and also wonder how it got there).

It’s clearly not “anything goes” in the wilderness. Most are aware of the obvious stuff—don’t feed the bears, don’t litter, don’t dig up ferns in a national park—but sometimes we forget the more subtle transgressions of etiquette in the wild. In the spring, when the human population in wilderness areas increases, I thought it would be a good idea to ask some outdoor types what breaches in etiquette get on their nerves.

The most frequently recurring annoyance focuses on intrusive noise and technology. Class V boater, whitewater instructor, and guidebook author Kirk Eddlemon hates it when people rev their engines in tunnels or honk at him from the road when he’s negotiating the rapids of the Little River in the Smokies.

“To me, it’s analogous to someone driving down the golf cart path while you’re focusing on a shot and honking and saying ‘That looks like fun!’” Eddlemon says.

Another paddler, Andrew Gunnoe, says that when he’s sitting somewhere remote beside a wild river and someone takes out a cell phone, it diminishes the experience. Gunnoe says he leaves his phone at home now because once, while canoeing with his wife in Florida, he took it out for a photo and dropped it into the water.

Jeremy Lloyd, who has worked in the Smokies since 1996, says it “drives him nuts” to climb to the top of a mountain to find people checking their messages on their phones or exclaiming in ecstasy as their signal revives itself.

“I go to wilderness to get away from all of that, but here I’m stuck on a mountain with someone entranced less by the view before them than with space-age technology they’re employing to ‘share the moment’ with a friend.”

He acknowledges this pet peeve as a “lost cause.”

A more low-tech noisemaker that bothers hiker Sam McGroom, from Walland, are bear bells. McGroom, who has hiked all of the trails in the Great Smoky Mountains National Park twice, says she considers hiking to be “a full sensory experience, and I don’t want to listen to your bear bells jingling away with every step on the trail. Truth be known, they probably don’t do a darn thing to deter black bears.”

Evy Linkous, a senior at Maryville College, would appreciate it if outbound hikers yielded to inbound hikers on trails, a notion she learned when she hiked at the Grand Canyon. The reasoning, she thinks, comes from the fact that incoming hikers are usually going uphill, outgoing coming down, and “it is frustrating to break pace to let someone aside.”

Knoxville fisherman Nathan Nelson noted the commonplace occurrence of having his fishing spot violated by a competing angler, but takes particular umbrage at braggarts at boat ramps who, after a slow day all around, talk about how great the fishing was at this same spot just yesterday, when they filled up their boat with lunkers.

Trout fisherman Neil Norman, who has a blog on fly tying (“Soft Hackles, Tight Lines”), goes even further with his territoriality: “Throwing rocks is an acceptable way to scare off inner tubers who get too close.” (Inner tubers might perceive Norman’s tactic as a breach in etiquette.) When it comes to fellow anglers, Norman wants more than elbow room: “In the past, what’s drawn my attention more than anything is the smell of an approaching angler—the most inconsiderate ones always seem to reek of chain smoking and beer sweat.” When a fellow flycaster asks what you’re catching them on, he adds, you are under no obligation to answer with complete accuracy.

Elbow room, that phrase associated with Daniel Boone, also counts at campgrounds. Johnni Freer, an avid RV camper, feels that people who take short cuts through campsites without asking permission are violating personal space. It’s different though, she says, when it comes to the campers next to her, and the boundaries are less distinct.

Kim Raia, former president of the Little River Watershed Association, is peeved by unburnable materials like plastics or aluminum left in fire rings and by loud generators and TVs at campgrounds.

Just about all of my interviewees mentioned litter, but I’m saving that for a column on its own, with perhaps a prize for most interesting litter.

One might argue that the items above already illustrate the occasional lack of consideration of our fellow humans, but sometimes we have to be even more blunt. People may be lacking in that part of the brain that tells them to slow down and ponder a bit before speaking or taking action.

Eddlemon loves it when people ask him if his feet are sticking out the bottom of his kayak. He also loves the question, “Where do you rent them things?” as if it were as simple as standing in line at Splash Country for a turn down the water slide.

Seeing folks less than prepared amazes Jeremy Lloyd. “Plant yourself halfway up Alum Cave Trail and count the number of park visitors hiking to LeConte with poor footwear [flip-flops] and no water.”

Lloyd sees “a declining sense of personal responsibility and for taking wilderness seriously. Risk is involved with going on even a quarter mile hike in the Smokies, but people forget this, or operate under the assumption that they are entitled to a rescue.”

McGroom says she has come upon hikers in the Smokies who don’t have a map and have no idea where they are. Though she is “amazed” by how often she sees this, she is gracious enough to carry along “dollar maps” to hand out to these wayfarers.

Scarlett Fox, a Maryville College student who survived my January nature writing course, remarks upon hikers in flip-flops with Coach purses, upset about “getting dirty” and wondering when this darn trail will end. She recalls being overtaken by a concerned park ranger searching for four women who thought Spence Field sounded like a good place for a picnic but had gotten lost, apparently unaware that this prime lunch spot was a few miles uphill from where they started out.

Greg Rowe, co-owner of the Little River Trading Company in Maryville, referred me to the book, How to Shit in the Woods, a classic on the intricacies of outdoor propriety and comfort. More than one of my sources mentioned that “paper flowers” and aromatic vestiges of human visits are a turnoff on the trail. 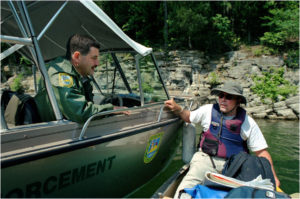 The author being “interrogated” by Kentucky Fish and Wildlife ranger Stuart Bryant on Lake Cumberland.

I’ve broken a rule or two out of ignorance or forgetfulness, and I’ve annoyed people at one time or another during my wilderness escapades. (I may have been a party to a selfie or two.) Nobody’s perfect. Nobody’s completely pure or blameless. We all mess up, and sometimes our different activities bring us into conflict. We don’t have to all agree on what constitutes the ideal wilderness experience or what drives us nuts, but being sensitive to others and to our environment seems like a good thing to keep in mind as we go outside to seek peace and diversion.

A writing instructor at Maryville College, Kim Trevathan will teach an outdoor writing workshop on May 21, from 10 a.m. to 12 p.m. at Central United Methodist Church (201 E. Third Ave.). Info: knoxvillewritersguild.org.