Is the Cal Johnson Building Still Safe? - The Knoxville Mercury 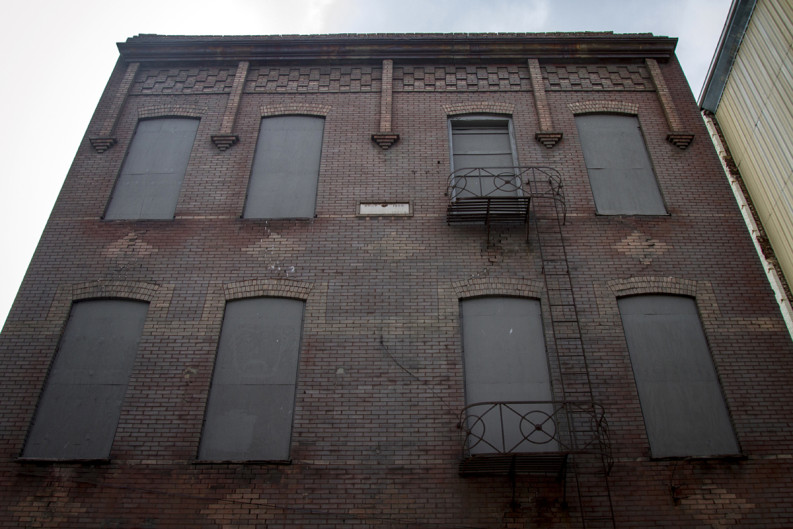 It takes some imagination to call it a pretty building right now, but with some cleaning and refurbishing of the sort that has brightened most of the other historic downtown buildings in the last 25 years, it could be. And this one deserves the attention more than your garden-variety Victorian commercial building. Few American cities have a building with a comparable history. It was built in 1898 by a man who was raised to be a slave. His name is still on the facade: “CALVIN F. JOHNSON.”

I wrote about it in this space a few months ago, but I first expressed concern about the condition of this rare building in a column in Metro Pulse in 1994. It was in better shape then.

It’s 2016 now, and the meeting discussing its fate was complicated and peculiar in some respects. For one thing, few were there to witness it. High-profile or controversial issues tend to bring out the crowds. That didn’t happen. Hardly anyone knew it was up for discussion.

The Cal Johnson Building, the subject of the hour-long discussion, as it turned out, was inconspicuous on MPC’s agenda. Item 32 was headlined only “City of Knoxville Mayor Madeline Rogero.” If that caught your attention for some reason, you might then read the lines beneath it, and you’d see something about “West side State St., south side W. Summit Hill Dr.” And if you thought about those clues, you might realize that they do indeed roughly correlate with the neighborhood of the Cal Johnson Building. (For the record, it’s closer to Commerce Street than Summit Hill.)

Knox Heritage, the usually well-connected preservationist nonprofit that advocates for old buildings, wasn’t there. Even they didn’t know about it. There to speak for the H-1 proposal was Rogero’s chief policy officer, Bill Lyons.

Another oddity about the vote was that the Historic Zoning Commission usually reviews such proposals and makes a recommendation to MPC first. That didn’t happen this time. In fact, in an apparent effort to make H-1 more palatable to property owner Jed Dance, the city was proposing an untried new form of H-1 that would offer protection only against demolition but skip over HZC as the reviewing board. Instead, this H-1 would be governed by the Downtown Design Review Board. The anxiety appears to be that protecting a building from demolition by H-1 also entails “burdensome” design guidelines. (The subject of windows always comes up. Historically appropriate windows have been the subject of expensive misunderstandings over the years.)

Apparently historic-zoning commissioners hadn’t been told about the city’s proposal to leave them out of the issue. The H-1 recommendation issue is still on HZC’s agenda for this Thursday’s meeting.

Dance himself, a likable fellow, made his case. Members of the Dance family, who are proud that they prevented the demolition of the Cal Johnson Building by city and county projects in the 1990s—though they later proposed tearing it down for better truck access—have for at least a decade alluded to intentions to fix it up, and did finally put on a new roof.

At the microphone, Dance declared that he’d never sell the building and repeatedly promised that he wouldn’t tear it down either. He’s moving forward with a plan to develop the building, he says, and had architect Brian Pierce with him. They were shy on details except that they were talking with one tenant about using the whole building, and another set of tenants who would share it, in a different plan—and that they’d considered demolishing the undistinguished rear third of the building to improve parking and access, but that option was looking prohibitively expensive.

Discussion got bogged down in whether this new hybrid H-1 proposal the city was proposing was legal, stripping HZC of its state-granted authority in municipally designated cases. Much of the conversation concerned the longtime reputation of the Dance family, owners of apparel manufacturer Bacon and Co., which is headquartered in another unkempt Victorian building next door to the Cal Johnson Building. If they’ve rarely fixed up buildings, they have been in business downtown since 1950, and a record like that always goes a long way with MPC.

An amended version of the mayor’s proposal restored the HZC review but also added a review by the presumably less fussy Downtown Design Review Board. If the necessity of review by one board displeases the property-rights folks, adding a second is unlikely to provide much solace. It failed 9-6.

The discussion seemed to confuse some of the participants, and it’s easy to imagine that if it had gone on for another half hour, or another H-1-lite motion had been cobbled together, the vote might have been different. Most of the members of the commission expressed some respect for the building and trust that it would be saved and soon renovated—based not on law, but on trust in the Dance family’s word.

The discussion raised an interesting issue. Is there a way to prevent demolition of a building without subjecting the owner to strict renovation guidelines?

But it’s unfortunate that the place where MPC chooses to take an uncharacteristic stand against a mayor’s preservationist initiative turns out to be the only historic building downtown built by an African American. It’s the oldest big building in town built by a black man, and the only remaining building associated with an extraordinary career.

Most of the buildings MPC helps save don’t tell such a story. Even Hollywood would reject Cal Johnson’s story as unbelievable. The slave who became a millionaire philanthropist once owned several buildings in town. This factory building is the only one still standing.

Anyway, that’s not the end of the Cal Johnson building or, necessarily, the H-1 proposal. Jed Dance declares he’s going to fix it up on his own. He just doesn’t want to be forced to abide by strict government guidelines.

Thus HZC will make its recommendations to City Council instead of MPC. Then City Council will decide for itself.