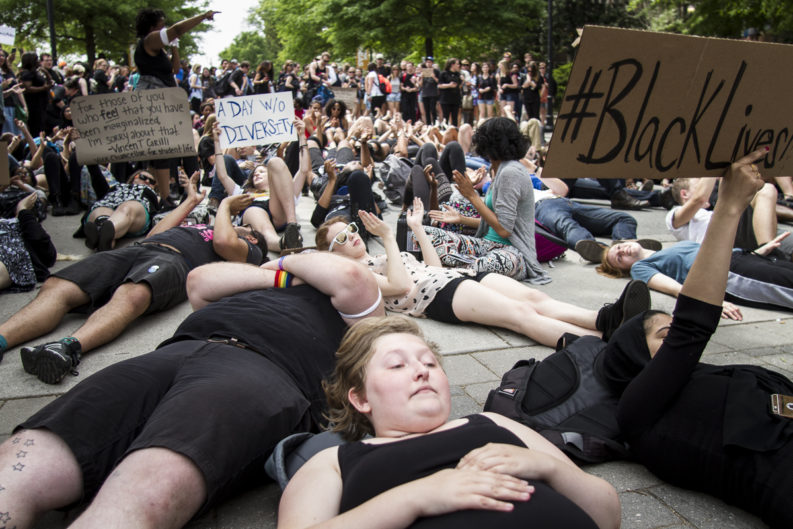 Hundreds of University of Tennessee students cut class and marched on campus Tuesday afternoon in the latest round of protests against state legislator’s efforts to defund the university’s Office of Diversity and Inclusion.

At least 200 students and others joined the Mass Class Exit protest, as it was called, carrying signs and chanting slogans like “UT Diversity Matters” and “no more business as usual.” Demonstrators organized at the Humanities Amphitheater near John Hodges Library at 1:40 p.m. before lying down in a walkway nearby and blocking foot traffic. The group then marched across campus, through Hess Hall and Presidential Court before forming a huge circle in the courtyard at Carrick Hall, a student residential building.

During the protest, Confederate flags were unfurled out of two of the dorm windows, an act one of the organizers, George Habeib, called a cowardly attempt at free speech.

“These people feel like they’re expressing freedom of speech, but they’re just trying to instill fear in us, and it further proves our point of why this [sort of protest] is needed,” said Habeib, a 19-year-old printmaking student. Another protester used a loudspeaker to lead the group in chants of “fuck the neo-Confederacy.”

The protest came just one day after the Tennessee House of Representatives voted 66-22 to pass a bill that would strip the funding UT Knoxville’s Diversity Office. The bill must still earn approval from the Senate before advancing to the desk of Gov. Bill Haslam. 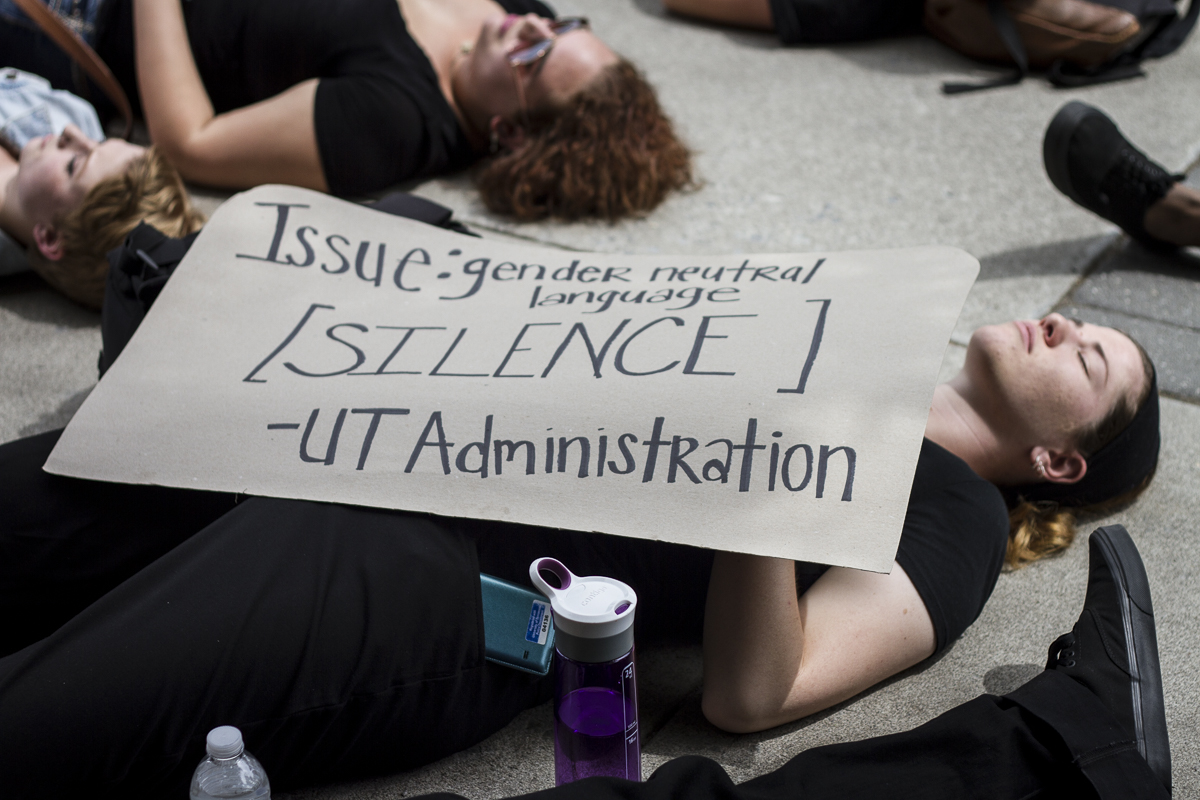 UT’s Office of Diversity has come under fire in recent months for publishing a handful of what turned out to be controversial blog posts on its website, and the university has drawn the ire of some students for its response. Last August the school’s Diversity Office made national headlines amid backlash over a blog post encouraging the use of gender-neutral pronouns some LGBT students prefer, and again in December as a posting encouraged UT staff to “ensure your holiday party is not a Christmas party in disguise,” warning against participating in things like “Secret Santa” or “Dreidel.”

The university eventually amended or deleted those posts, moving oversight of the Diversity Office’s website to the school’s communications department. UT Diversity Matters, the group that organized Tuesday’s protest, formed in December in response to the posts being taken down, what student leaders have said is a lack of support by the school’s administration for Vice Chancellor of Diversity and Inclusion Rickey Hall, and what some say is a hostile climate for minorities on campus. Hall may not have to deal with these issues much longer. He is reportedly in the final rounds of interviews for a similar job at the University of Northern Iowa. He was the first diversity officer at UT, a position he has held for about three years.

Marcus Harrell, a 20-year-old biochemistry major from Memphis, says he’s been attending protests supporting diversity efforts on campus since UT Diversity Matter formed in December because he knows those types of inclusive program are important for low-income or minority high schoolers that are hoping to attend college.

“A lot of people where I’m from, where we’re really poor, look to come to the University of Tennessee, but they’re going to be deterred from following their dreams,” if funding is stripped from the school’s diversity programs, he says. “I got an academic scholarship to attend UT, but a lot of my friends back home are looking to come on a minority scholarship.”

Over the past four months members of UT Diversity Matters have staged a number of protests, met with UT officials to express their concerns, traveled to Nashville to confront state lawmakers, and organized phone banking and letter writing campaigns in efforts to get administrators at UT to back their stance on diversity. The group has a 19-point list of demands aimed at eliciting stronger support from the school.

The state bill passed by the House on Monday, HB 2248, specifically seeks to defund UT Knoxville’s Office of Diversity and does not address diversity funding on other UT campuses. A Senate subcommittee last week voted to change on of the more contentious aspects of the bill, nixing a section that would have diverted that money to fund “In God We Trust” decals for law enforcement vehicles. Instead the money would go towards minority scholarships for future UT students (a similar vote by the House would put 75 percent of the money towards scholarships and keep 25 percent for decals). That puts the House and Senate bills at odds with each other, and could make for a showdown to see which–if either–bill wins final approval.

Harrell says that’s a welcomed change, but said it’s like “putting a bandaid over a bullet wound.” 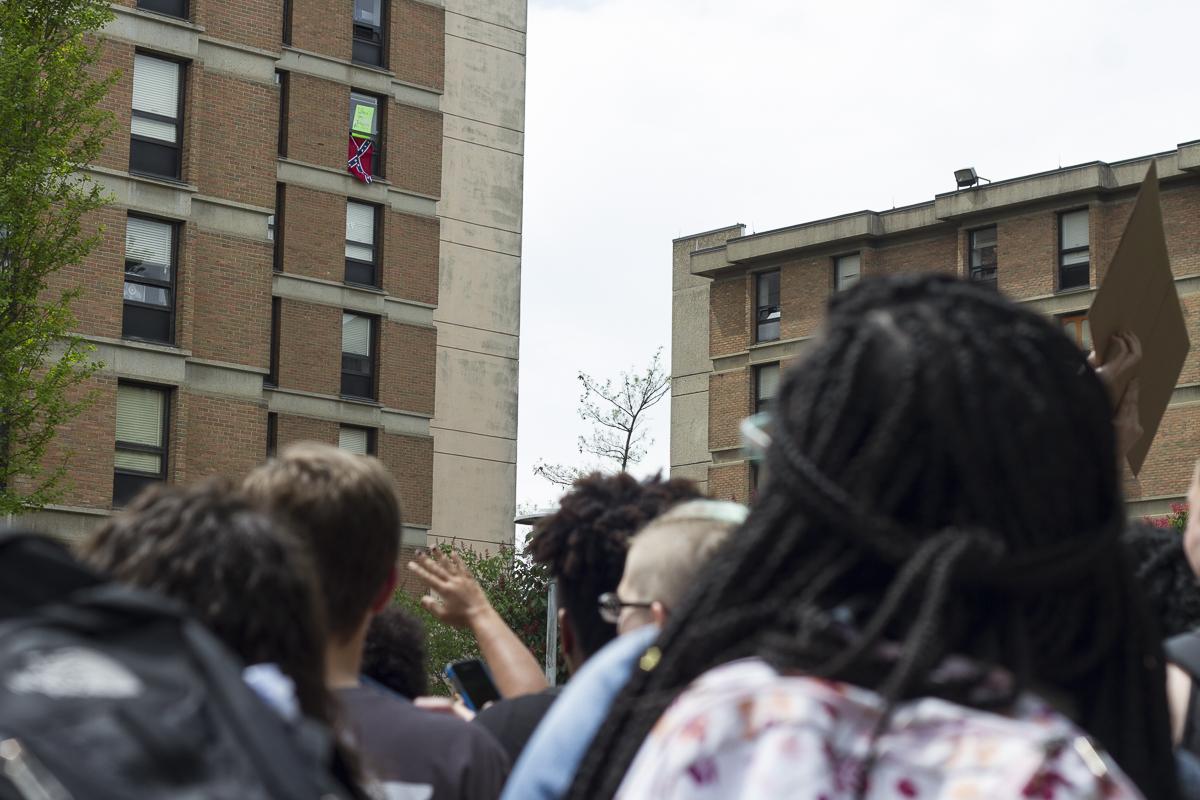