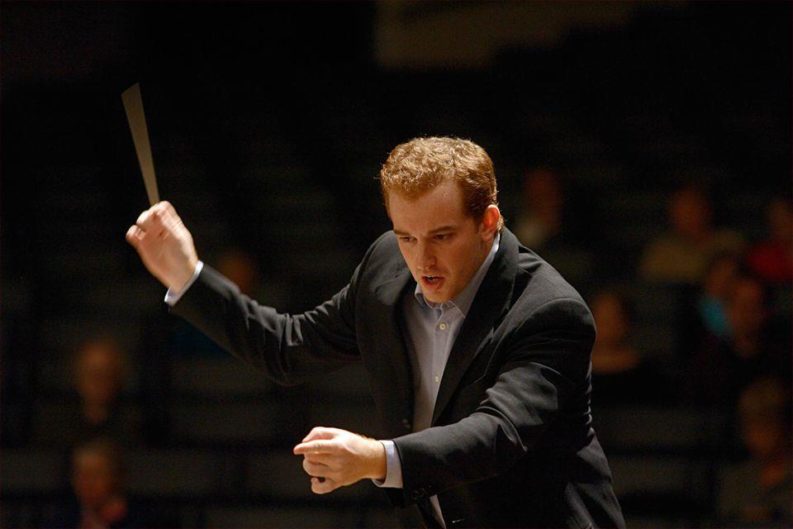 It has been a long and winding road for the Knoxville Symphony Orchestra in its search for its next music director. But the journey is almost complete. Steven Jarvi, the sixth and final candidate appearing as a guest conductor this season, made his case with the orchestra last weekend. What remains now are the discussions and final judgments of the selection committee, made up of orchestra members, KSO board members, and management staff. Although there are scenarios where a decision could be delayed, I’ve been told to expect an announcement in May.

Since January, I’ve maintained that the consistently impressive showings by the candidates—coupled with an orchestra that was currently playing with phenomenal craftsmanship and artistry—was probably making the decision agonizingly difficult. Not only did Jarvi match the high level of musical competence of the other candidates, his technique as a conductor drew absolutely top-notch ensemble playing from the orchestra. And with that tight ensemble performance as a base, he guided the orchestra to some exhilarating artistic moments that nudged the sublime.

Of course, it is hard to go wrong with the crowd-pleaser that is Edward Elgar’s Variations on an Original Theme, popularly known as the “Enigma Variations.” The work, a theme and 14 variations, drips with tonal emotion, pulling the listener between alternating moments of reflection, exuberance, elation, sadness, and joy. Since those emotions are generally irrepressible even when the work is played adequately, one forgets how magnificent the work can be in the hands of a conductor who has an inspired point of view and the ability to extract subtle details of color and focus from the orchestral lushness.

Adding to the success of this work was the luminous playing by the KSO string sections. Although in the past I have hesitated to describe the KSO strings under Concertmaster Gabriel Lefkowitz as having a signature sound, the section has developed a sonic character of its own in the last year or so. That solid radiant clarity, supported by ensemble precision, has made a world of difference in the overall KSO presentation.

Impressive, too, in the Elgar, was Jarvi’s balance between bombast and subtlety in brass and strings, with proper importance imparted to woodwind color. The beautifully layered Variation X, which opens with tiptoeing flutes, oboes, and clarinets punctuated by the violins, only to be smoothed out by a viola passage (played here by KSO principal Kathryn Gawne), was delicate and lovely. The cello solo in Variation XII was beautifully played by principal Andy Bryenton. And anyone who resisted the sad yet optimistic modulation between Variation VIII and Variation IX (“Nimrod”), accomplished by a sustained pianissimo G from Lefkowitz, is truly hard-hearted.

The featured soloist of the evening in the Dvořák Cello Concerto was Susie Yang, who enjoys both a solo career and the position of associate principal cello with the Kansas City Symphony. Yang beautifully handled the contrasts of the piece, from the abrasive opening passages through the alternating delicacies and tribulation of the Adagio movement. The Finale movement and its ebb and flow of musical energy was nicely controlled, as was Yang’s modulation in string tone from stormy to pastoral to forceful. In many ways, though, this concerto performance was truly a duet between soloist and orchestra. Jarvi kept the two in perfect balance without losing any of the orchestral texture or character, dramatics of volume, or the intensity of exposed instrumental passages.

Jarvi’s opening selection, Finding Rothko, a 2006 work by American composer Adam Schoenberg, was of special interest on several levels, particularly in that this was my first experience with the piece, and a welcome one. The title comes from inspiration the composer received from viewing several paintings by abstract expressionist Mark Rothko at New York City’s Museum of Modern Art. The through-composed four movements are each devoted to a specific painting and titled “Orange,” “Yellow,” “Red,” and “Wine.”

Learning that Schoenberg teaches composition and film scoring at Los Angeles’ Occidental College explains a lot about the specific charms of the work and its cinematic-like textural images. This complex work was handled beautifully by the orchestra. In “Orange” particularly, Schoenberg used the haunting qualities of the English horn, given emotional substance by Ayca Yayman, and the oboe of Claire Chenette, to portray a hazy suggestion of Americana. A thank you goes to Jarvi for reminding us of this significant young American composer.