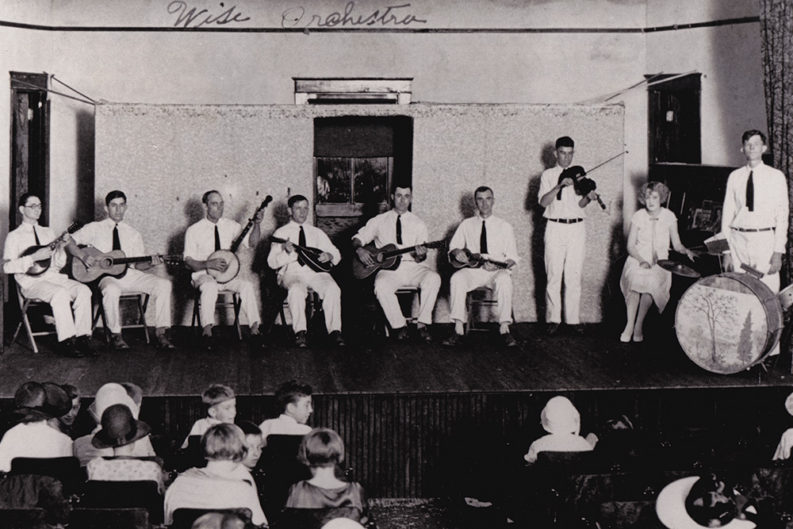 The Wise String Orchestra recorded two sides for the Brunswick-Vocalion label at the St. James Hotel in 1929: “Yellow Dog Blues” and “How Dry I Am.” The former tune was written by “Father of the Blues” W.C. Handy; the latter is an Irving Berlin-penned novelty song that you could probably hum right now, even if you don’t recall when and where you ever heard it. They’re fine records, festive and fun numbers executed by the family string band of brothers George (guitar) and Isaac (banjo and mandolin) Wise and George’s son Newman (fiddle). The 78 record was the only known recording by the Wises, and for a long while little was known about their lives following its release.

Newman had two daughters whom we had some trouble tracking down, but in the fall of 2014 we found Sonia Clift, nee Wise, on Facebook. We contacted her and arranged a meeting with her and her sister Barbara to learn more about their father and his band.

Sonia has a copy of the 78 record—it’s unfortunately cracked—but she says her father never talked about recording it. That’s not altogether unusual among the children and grandchildren of sessions artists with whom we’ve spoken. Though making a record was an extremely rare opportunity at the time, for a variety of reasons many of the musicians didn’t share memories of the experience with their families. In Newman’s case, this could be because he continued to fiddle throughout his life and recorded himself with his friends and family playing music. Maybe it seemed like a footnote in his life of making music.

Newman Wise was born in 1911 in Wise Springs, where Three Ridges Golf Course is now, between Tazewell and Washington pikes. He was something of a child prodigy, picking up the fiddle at age 7 and astonishing the gathered adults by recreating the music they had just played. At 16 he won a fiddling contest on Market Square, where he possibly encountered and competed against some of the musicians who would also record at the St. James hotel two years later. He played around town, including on the Mid-Day Merry-Go-Round, but he never tried to make a go at a professional career, earning his living as a machinist at Y-12 National Security Complex in Oak Ridge.

In his later years he played regularly at Carl Bean’s Big Valley Barn in Clinton and at the Museum of Appalachia’s Fall Festival. There he struck up a friendship with string-instrument virtuoso John Hartford, who admired Newman’s playing. Toward the end of Newman’s life Hartford sent a letter thanking him for his friendship and for teaching him “some wonderful fiddle tunes.”

Recently, Sonia found some cassette tapes, from the late 1970s and early ’80s, of her father and some friends playing tunes, including a tape credited to the Alcoa Musical Retirees. They cover dozens of songs, but none of the numbers Wise recorded at the St. James appear. Oddly, I was rummaging through a box of cassette tapes at an estate sale a few months later (at 10 cents each, the format has really fallen from favor) when I came across a case that had “Newman and Edward Wise” written on it. It was another home recording from the early ’80s, this one with Newman and his brother. Along with Howard “Louie Bluie” Armstrong and Willie Sievers of the Tennessee Ramblers, both of whom continued to perform professionally into the 1990s, Newman Wise was probably the only other musician who recorded at the Knoxville Sessions of 1929-1930 to leave behind such a thorough record of his music in the decades that followed.

In 1986, the Knoxville News-Sentinel erected a sculpture in the shape of a treble clef at the corner of Summit Hill Drive and Gay Street, meant to commemorate Knoxville’s country music history. Accompanying the sculpture were bronze plaques displaying names of many musicians who lived and performed here over the years, including Newman’s. He was so touched by the monument that he wrote a letter to the Sentinel thanking them.

“This was installed in an area like a park with benches and walkways forming a very nice, peaceful area with trees and hedges, all of which was built to honor the many musicians in East Tennessee, some famous and some not so well known today as they were years ago,” Newman wrote. “Several have passed on. This was a very noble act conceived by someone at the newspaper company. I have known quite a number of people named here, which includes my own name. … Most string musicians have had precious little recognition in this area over the years and I for one wish to thank the News-Sentinel for this noble project.”