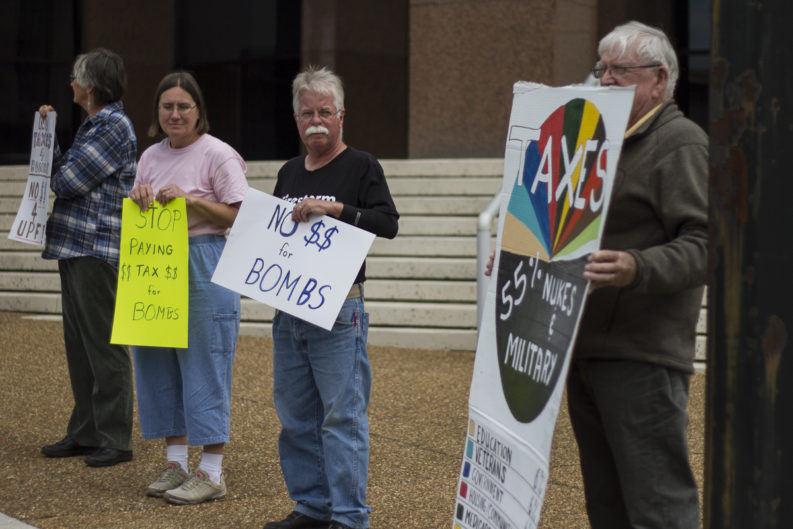 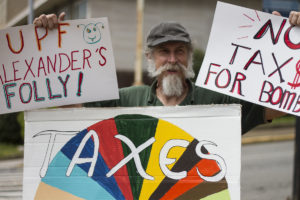 About a dozen peace seekers carried homemade signs and even broke out an acoustic guitar in front of the John J. Duncan Federal Building in downtown Knoxville today to protest the federal funding of a uranium processing plant being built in Oak Ridge.

The picketers, members of the Oak Ridge Environmental Peace Alliance, handed out fliers and carried signs that read “NO $$ for BOMBS” and “UPF ALEXANDER’S FOLLY,” referring to United States Sen. Lamar Alexander (R-Chattanooga), who chairs a subcommittee charged with vetting federal energy and water appropriations.

Protesters say they want to know what $575 million earmarked in next year’s budget for the construction of the Uranium Processing Facility (UPF) in Oak Ridge is being used for. Environmental Peace Alliance coordinator Ralph Hutchinson says the budget item would bring the project cost so far to $3 billion, nearly half the projected total for construction, and design plans for the plant have yet to be finalized.

“I seriously question if everything is on the up and up with the UPF,” Hutchinson says. “$3 billion and there’s not even a design done yet?”

The activists say they protested on April 14, the eve of Tax Day, to draw attention to what people’s taxed income was being spent on.