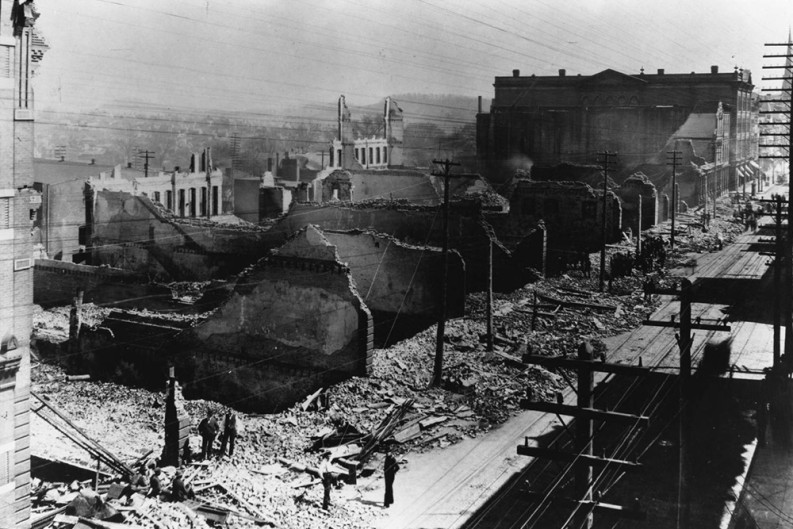 Compiled by Jack Neely for the Knoxville History Project

Dogwood month offers plenty of opportunities for contemplating our unique past.

Friday, April 8, is the 119th anniversary of the worst fire in Knoxville history. The “Million Dollar Fire” of 1897 started behind the Hotel Knox, on the 400 block of Gay Street, killed at least four people and leveled several of the city’s biggest businesses. It spared only the Sanford, Chamberlain, & Albers wholesale-drug business–now known as Tailor Lofts and 5 Bar–and, at the other end of the block, the Century Building. These two remain as the oldest buildings on the long block.

This weekend is Rhythm N’ Blooms, a three-day music festival centered along Jackson Avenue, the old railroad frontage street which is lined with industrial buildings of the late 19th and early 20th centuries. For the first time, the newly renovated Jackson Terminal building will be open as part of the festival. Journalist and author Jack Neely will be leading musical history walking tours on Saturday, April 9, and Sunday, April 10, at 2 p.m., starting at the Jig & Reel. For more information, rhythmnbloomsfest.com.

On Wednesday, April 13, Bradley Reeves, co-founder of the Tennessee Archive of Moving Image and Sound, will give a free noon “Brown Bag” lectureat the East Tennessee History Center. Accompanied with film, his talk will be “Knoxville’s WNOX Radio: The Cradle of Country Music” emphasizing Knoxville as a melting pot of musical culture in the 1920s and later.

Friday, April 15, is a day that should mean something to anybody who ever buys an airline ticket. It’s the 105th anniversary of the first airplane passenger ride in Knoxville. Pilots J.A.D. McCurdy and Lincoln Beachey, both well known in aviation history today, held an “Aviation Meet” at Cal Johnson’s Racetrack in East Knoxville. The popular air show included an aerial race and a “bomb throwing.” When McCurdy determined the infield to be too short to assure safety for the promised passenger rides, he held that part of the days-long festival at then-remote Holston Island, which could be reached only by mule cart and ferry. The first two passengers, winners of a Knoxville Journal & Tribune “popularity contest,” were Mellie Cole, of Luttrell Avenue, and 17-year-old Joseph Wood Krutch, who would later become a nationally known author.

On Saturday, April 16, the East Tennessee Chapter of the American Institute of Architects sponsors, as part of its annual Architecture Week, a historic downtown architectural walking tour led by journalist and author Jack Neely, this one emphasizing downtown churches. The tour begins at 9 a.m. at the Bank of America parking garage on Locust Street, just south of Main Street. It’s free and open to the public.

April 22 is the 201st birthday of Thomas Humes (1815-1892), arguably Knoxville’s first historian. Son of an Irish immigrant, he became a journalist, editor of a succession of local newspapers, and then–although he’d once gone to Princeton to study to be a Presbyterian minister–he became the Episcopal rector at St. John’s. In 1842, Humes gave a speech on the history of Knoxville, at a time when much of it had already been forgotten. At the end of the Civil War, Humes was elected president of East Tennessee University, and during his time in office it evolved into the University of Tennessee. In 1888, he published a book called The Loyal Mountaineers of Tennessee, which is considered one of the best contemporary accounts of the Civil War in Knoxville. UT’s Humes Hall is named in his honor.

On April 27, 1865, the riverboat Sultana exploded in the Mississippi River, America’s worst maritime disaster, with a bigger death toll even than the Titanic, sometimes estimated to have been as high as 1,800. Hundreds of the victims were freed Union soldiers from East Tennessee who had been prisoners of war in the Deep South, and one of the nation’s largest and oldest memorials to the Sultana disaster is in South Knoxville’s Mount Olive Cemetery, off Maryville Pike. It was dedicated a century ago this July 4.

Photographer Jim Thompson was a teenager when he took this, one of his earliest and most famous photographs, of the devastation left to the 400 block of Gay Street after the “Million Dollar Fire” of 1897. The fire stopped at the Sanford, Chamberlain, and Albers building, now known as Tailor Lofts, in the background. Most of the buildings were rebuilt within months. Image courtesy of the Calvin M. McClung Historical Collection.