10 Tips for Photographing the Great Outdoors - The Knoxville Mercury 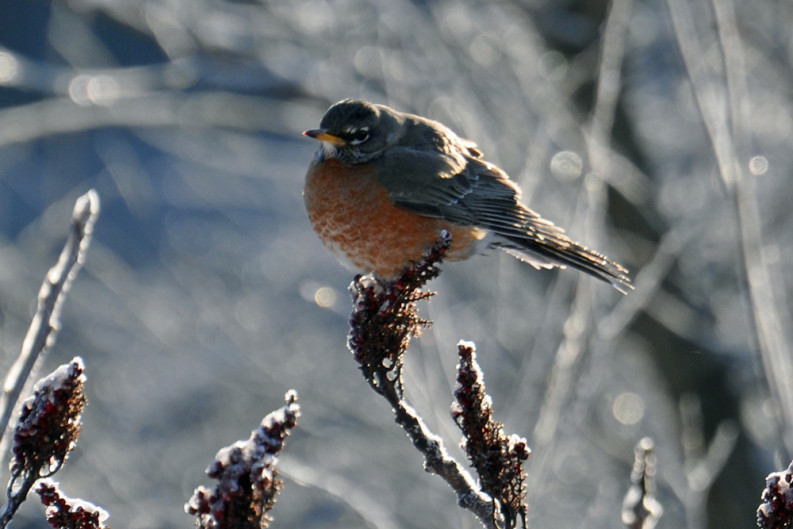 We heard the owl around noon on a bright spring day, its melancholy call an insistent melody against the louder mockery of crows. I knew what would happen next because I hadn’t brought my camera. As we crossed the bridge over Melton Creek on the Point Trail in the Obed, a shadow passed over us and the barred owl landed on a branch 15 yards downstream, in full sunlight, and stared at us for 10 minutes.

Leave your camera at home and you’ll see something extraordinary.

Since this is the time of year many start pondering how to capture the glory of the outdoors, whether it’s blooms or bumblebees or mountain vistas, I thought I’d offer up what I’ve learned from years of trying to frame memorable outdoor experiences and from hanging out with professional photographers. 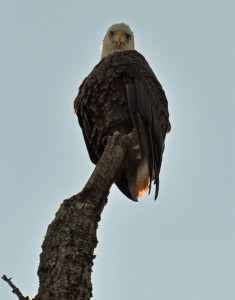 Be still, be patient. I like to shoot from a kayak (or canoe) because I think it minimizes my intrusiveness into the wild and helps me be quiet and sneaky. On Notchy Creek, off Tellico Lake, a bald eagle, perched 50 feet above me in a dead sycamore, tolerated my gliding right underneath him on the water from maybe 100 yards away, over a period of an hour or so. I kept shooting the whole time. Trickster, he timed his exit from the branch so that I missed that shot. Photographing from a boat has its obvious risks, so having a dry bag handy is good practice, though if you’re like me, you want the camera ready to use, out of the dry bag. So far, I’ve been lucky.

Drew Crain, a biologist at Maryville College, also teaches a wildlife photography course during our January term. His biggest piece of advice is “to get a different perspective than the eye normally goes to.” This means that instead of standing up and shooting down at the salamander, get on the ground, as low as you can, and capture a perspective out of the ordinary. 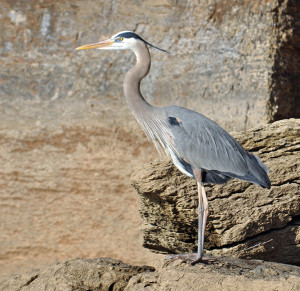 Choose a spirit animal and study it. I love the awkward majesty of the great blue heron, its croaky call, its yellow eyes and its swooping prehistoric flight. I’ve photographed enough of them to be able to time the moment when they decide to launch from their fishing spot, and I like to pan as they fly and take multiple shots with the motor drive. Usually at least one of the shots is in focus. Photographing the same animal repeatedly, you can’t help but learn about them.

Find a sacred place and return to it repeatedly. Knowing how the light in a particular place differs according to season and time of day and remembering where the birds and the deer hang out takes some of the guesswork out of photography. Crain tells the story of his class spotting a bobcat (a rare sighting) on a trail in Cades Cove. The best student in his class, Kyle Harris, took multiple shots from 20 yards away, only to find that something had malfunctioned on his camera. A few days later, Harris returned to the same spot and found a bobcat staring at him from a log, as if waiting for his return. He got his photo, and Crain says that it was perhaps the same cat, noting that animals tend to be territorial. 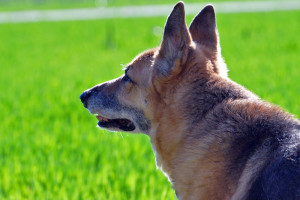 Look for contrast in color. If it’s an overcast day, Crain says, he won’t take a picture of most birds against that sky. He’ll go into the woods and look for shots that offer contrasts in color, say between green foliage and brown or gray plumage. If there’s blue sky, he says he likes to be in open fields to frame birds against that brilliance. Though my dog Norm hardly qualifies as wildlife, he rivals any animal I’ve encountered for photogenic charisma, and last month I could not resist contrasting his black and tan coat against the bright green winter wheat of western Kentucky.

Seek out photos that tell a story. One of Crain’s favorite shots took place in South Carolina’s Botany Bay, where he saw a spider web strung between two palm trees. No big deal there, but in the spider web was a fish. From this he deduced that the web had functioned as a fishing net, and at high tide, this spider, a giant lichen orbweaver, had snared an unusual prey.

Be ready for the unusual. Notice I didn’t say “seek out,” because what’s unusual rarely appears when you’re prepared. If you spend enough time outdoors, chances are you’ll see odd things that merit a visual record. A few years ago, I was canoing with my Uncle David on Melton Hill Lake. It was a foggy summer morning, and we were close enough to the four-lane bridge between Solway to Oak Ridge to hear the constant whir of traffic. We were talking, but not much. We were on the far side of the lake from the boat ramp when something large crashed through the brush and plunged into the water. It was a buck, who had decided to swim across the lake, and he was within 30 yards of us. Seeing a deer swim was a rare sight for me, even rarer because he was so near. Alas, this was another day I’d left the camera at home, so you’ll have to take my word for it on this one.

Look for the uncommon in the commonplace. The robin is an everyday songbird, and we’ve all seen thousands of them. I’ve rarely spent the time to frame one in a shot, but one very cold day last spring, on a hike around the Will Skelton Trail, I saw one perched on a branch of sumac that perfectly captured the frigidity of the day. He was all hunched over and puffed up, and the sumac was glistening with a sheath of ice. In his posture and his gaze was what I interpreted as an attitude of disbelief at someone so stupid as to be walking around on two legs, featherless, without any specific intent on such an inhospitable day. 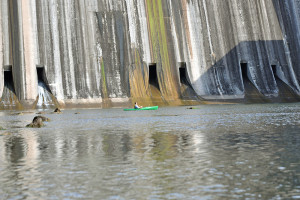 Humans are good to have along for a lot of reasons, one being that they work great to create a sense of scale for the focal object of your photographs. It was great to have Drew Crain along with me fishing below Norris Dam so that I could frame him against the vastness of the wall of concrete that held Norris Lake above us as we cast our lines for trout in the tailwaters.

Good luck photographing, which is as good an excuse as any to get outside and loaf. Like fishing and bird watching, it lends a legitimacy, if you need it, for aimless rambling in the wilderness, good for mind, body and spirit.