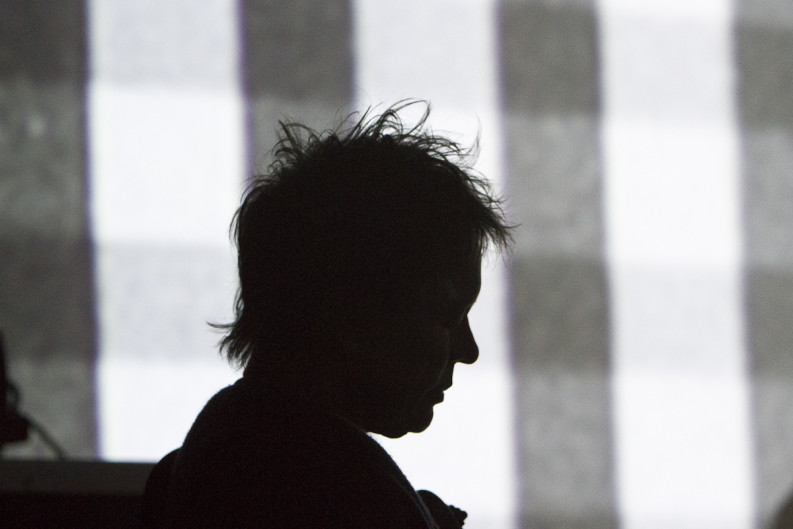 It was, more than ever before, a festival of tips on smartphone apps. Attendees got alerts about surprise performances and sold-out shows. The tip I got was strictly analog, a word from a friend in a corner bar. What I heard was that Friday night there would be, at the oldest church in Knoxville, something to witness. Though tempted by some other shows, I was just curious enough to walk down to First Presbyterian. At the top of the marble steps, I tried the main front door, and found it open. Hearing agreeable sounds inside, I slipped into the interior door, into the sanctuary. Inside were five people. One was a trim old man in black playing an old brown grand piano up in the front of the sanctuary. Near him was an eccentric-looking middle-aged woman with an electronic fiddle. Both were in black.

The woman was Laurie Anderson, one of the idols of my youth. When I was 23, I played her ironic crypto-minimalist album, Big Science, so often I can still recite most of it. The old man was Philip Glass. He is one of the most famous composers in the world. I knew him because he looked like Philip Glass and was playing a classic riff with descending chord changes.

They were rehearsing. I sat in the back at first, hoping they wouldn’t notice. When a young woman brought in a Lenny’s bag with some coffee in cardboard cups, it broke the spell, they seemed friendly and relaxed, and I slipped up to the eighth pew.

They weren’t just practicing, they were composing. I could barely hear what they were saying. A godlike voiceover came through the speaker. There in the same big room where my grandparents went to church every Sunday, Glass and Laurie Anderson were improvising to Allen Ginsberg’s “Wichita Vortex Supra.” It was part of the show.

I wanted to meet them, just to say I did. What do you say to Philip Glass? It was a minimalist dilemma. I sat there and thought, and came up with nothing.

With Laurie Anderson, I’m pretty sure I would just stutter in C sharp.

So I sat there quietly, hoping I wouldn’t be revealed as a spy. I watched for an hour and a half. They were in the thick of it, intent on their project, oblivious to an agog stranger. They wanted to get their Big Ears performance exactly right. It’s important to musicians. It’s a rare musicians’ festival, a weekend where geniuses don’t have to pretend they’re ordinary.

And it’s important to the city. Organized by AC Entertainment and subsidized by the Aslan Foundation, Big Ears does more for the global profile of my hometown than any collegiate sports program ever does. Music writers write about cities more than sportwriters do.

While waiting to get in the Bijou, one well-traveled visitor told me he knew of no place in America with so many good music venues so close together. I mentioned Chicago, New York, and he said no, he knew those places.

Three of the six buildings that impressed musicians from around the world this past weekend are buildings we almost demolished. The other three were once threatened. Thank a preservationist.

One of the new ones this year is called, for the time being at least, Mill and Mine, suddenly one of downtown’s biggest venues. My first peek at it was at noon on Saturday, to see a percussionist from California, Steven Schick. The show was more interesting than you’d ever expect a solo percussionist to be. He had a few conventional drums, a drum big enough to raise sharks in, some come-and-get-it triangles, and the biggest gong I’ve seen outside of a B movie. Sometimes the show was so quiet you could notice other people’s respiration. Sometimes so loud you worried about your aural health.

Slowly it became fascinating, as was the space. Much bigger than it looks from the outside—a “hangar,” as someone said—it was one of several buildings built in the 1920s for the cutting-edge automotive trade. I wandered around, as a few others did, too, like ghosts. Gutted in a fire a couple of years ago, developers David Dewhirst and Mark Heinz reimagined it, replacing the old-fashioned wooden ceiling just as it was, with fans and skylights, but added a mezzanine balcony. The couple hundred people in there for the Schick show all responded differently. Some lay flat on their backs on the new hardwood floor, as if in a meadow. Some sat cross-legged in yoga poses. Some crept around the room, quiet as thieves. Some, too proud to tiptoe, boldly clomped.

For me it was a fine introduction to a historic space I’d never encountered before. And when I stepped outside, Knoxville, presented in such interesting accretions of irregular rectangles in the bright April sunshine, struck me as a beautiful thing. 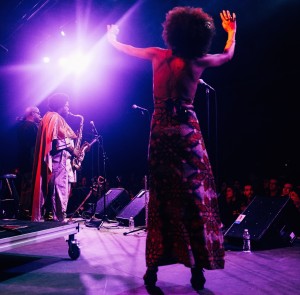 Kamasi Washington performing at Big Ears 2016 in the new venue, Mill and Mine.

I returned at midnight for an exuberant jazz funk band led by Mr. Kamasi Washington, and it was a different place altogether, a big crazy party room. The name Mill and Mine comes from the motto of the last tenant, Industrial Belting and Supply, which was on the premises for about 40 years. Before that, there were cars and trucks in here, being sold, being serviced. The name may confuse older folks, who remember the Tennessee Mill & Mine building, a very large building on State Street that was torn down in the late ‘90s, for a justice center that was never built.

The new Mill and Mine is on a perfect block, historically, for something like Big Ears, a cultural portal. Depot Street was always where we greeted the new. Right across the street is the train station. Depot Street is where we welcomed Buffalo Bill, Lily Langtry, P.T. Barnum, Carrie Nation, Helen Hayes, Al Jolson, Anna Pavlova, Walter Damrosch, General Tom Thumb, several presidents, and all manner of oddities traveling on flatcars, from the real Liberty Bell to an occasional sperm whale, arriving a little the worse for wear and available for viewing for anyone with a dime.