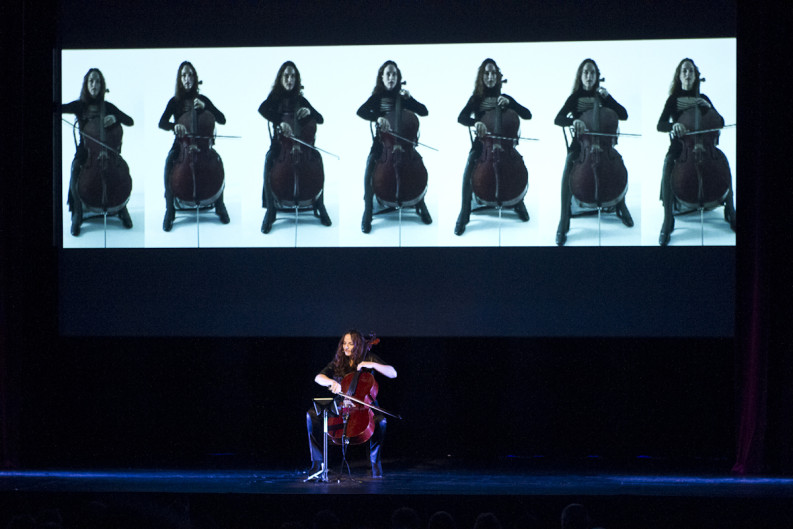 The biggest Big Ears yet wrapped up yesterday with an immersive and stirring outdoor performance of festival composer in residence John Luther Adams’ Inuksuit that radiated good vibes all over Ijams Nature Center, except maybe in the parking lot. Dozens of percussionists were stationed around the park’s trails, which were packed with hundreds of people with kids and dogs and picnic baskets. As a musical experience, it was a completely different thing than what festival-goers (8,000 of them, according to the organizers) had been through in the previous 72 hours; as a demonstration that Knoxville is a different place during Big Ears, it was a convincing coda to a thrilling, enthralling, sometimes transcendent and almost always eye-, ear-, and mind-opening weekend.

Now the reviews have started rolling in. The New York Times‘ Ben Ratliff has been to every edition of Big Ears, and he’s written positive reviews of each one. This year he’s even more enthusiastic than usual. “It has a rare, intuitive and ultimately anti-commercial vision, presented with purpose and first-rate sound on a thoughtful scale to a growing audience that isn’t even close to jaded about it,” he wrote yesterday.

The Guardian ran the longest review so so far, a three-day, 3,000-word wrap-up by Seth Colter Walls, who put in a couple of 12-hour days to capture the scope and variety of the festival. Like everybody else who attended, he recognizes that one person can only see or hear a fraction of what’s available. “Between Thursday evening and Sunday’s early morning hours, I caught enough of 15 performances to feel comfortable rendering some sort of critical take,” he writes. “There were half a dozen acts I wish I’d seen – though with one exception, I wouldn’t give back any of the experiences I had.”

Rolling Stone‘s Christopher R. Weingarten is another repeat Big Ears visitor; in this year’s review, he focuses on “the pursuit of drone.” He also notes how much the festival is growing. “The Big Ears app bubbled with notifications that events were at capacity, not just with relatively ‘big’ draws like [Anthony] Braxton, but also for fleet-fingered jazz guitarist Mary Halvorson, cello rock star Maya Beiser, laptop squelcher Ikue Mori and Wolf Eyes, whom even diehard fans would comfortably call ‘an acquired taste,'” he writes. “The days of cavalier show-hopping were replaced by long lines and strategic queuing. Big Ears is not exactly the drone Coachella — but the secret is definitely out.”

Other reviews have come from Consequence of Sound and Billboard, which posted a two–day recap. A major metropolitan weekly has something in the works, according to rumor, and Jack Neely’s column in this Thursday’s issue has a perspective that nobody else has gotten.