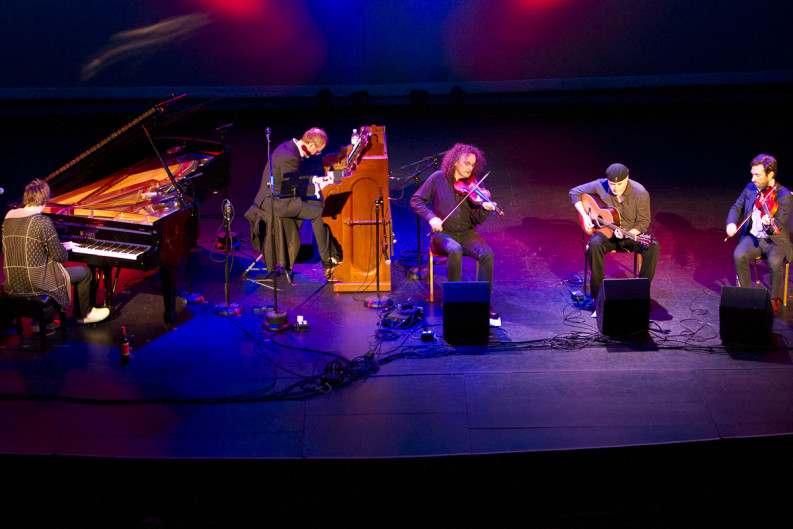 It’s hard to put into words what makes the Gloaming special. The first few times you hear them, you’re likely to hear traditional Irish music with a gloss of middlebrow respectability—the kind of poised, cosmopolitan elegance that gets you reviewed on NPR. But there’s nothing middlebrow about the band; it’s superficially pleasant music that, over several listens, I’ve found to be genuinely, deeply beautiful and profound.

Despite the group’s pedigree—fiddlers Martin Hayes and Caoimhín Ó Raghallaigh and guitarist Dennis Cahill are superstars in trad-music circles—and the fact that they draw inspiration from Irish folk music and folklore, the music they make as the Gloaming isn’t really traditional at all. There’s a piano! And no horns or pipes or flutes. But most of the lyrics are in Gaelic. It’s a thoroughly original sound that also feels rooted in trad forms.

What you mostly hear from the band is an unfussy, unassuming kind of mastery. They are simply world-class musicians, especially vocalist Iarla Ó Lionáird and Hayes, who make elaborate and arrangements and nearly telepathic ensemble playing seem effortless. Much of the band’s skill comes from knowing when not to play, or at least not overplaying. (Cahill was barely audible for most of the night; his primary function on stage seems to be more like a bass player’s than a guitarist’s. And Hayes, with Yogi Berra-style absurdist wisdom, noted that the repetition of jigs and reels isn’t boring until it is.) None of the individual parts are particularly difficult or virtuosic. The arrangements feel delicate and almost precarious—one misstep and the whole thing will fall apart.

At the Bijou Theatre last night, the Gloaming played several songs from their 2014 self-titled debut and the brand-new 2, released in February. The songs combine original material with reels and jigs from the trad-Irish repertoire. The live versions were just different enough from the recordings to make the show its own reward; Lionáird’s understated sense of drama resonated in the beautiful Bijou, and the fiery dual-fiddle sections were more energetic and muscular than they sound on the albums. They are a remarkable studio band, though—it’s hard to pick the live version over the controlled hyper-competence of the albums, which suits them. But they’ve set a high bar for the rest of the weekend. Often, the best Big Ears performances aren’t the ones you expected; in this case, the one I was most looking forward to may be the winner.

Olivia Chaney, who performed on the same stage just before the Gloaming, takes a similar approach—new arrangements of British folk and art songs, original songs that sound like old folk songs—but has much less lasting impact. Chaney—with a background in folk, classical music, and jazz—has collaborated with other artists for the last several years and released her fist album just last year. There’s promise in her approach, and she has a good voice, but I thought she’s an overly earnest singer who mistakes slow tempos for artistic and emotional seriousness.

(If you see me out today, ask me how I managed to mix up the late-night venues so that I missed Andy Stott, another anticipated show, and instead watched 10 minutes of the much-maligned Yo La Tengo drone/jam session without realizing what I was seeing.)