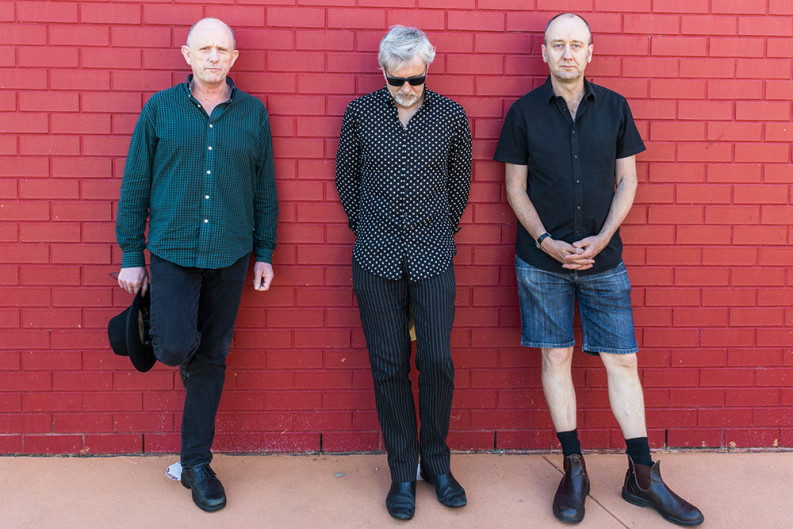 Describing the Necks’ sound can be difficult. Knowing that they are a bass, drum, and piano trio that plays improvised pieces lasting around an hour is some help. Calling them a jazz or minimalist act less so. While traditional jazz improvisation usually launches from a composition or at least stated theme, the Necks make it all up as they go. But neither do they resemble most free jazz or improv acts, where cacophony and bluster often hold sway. Playing together for almost 30 years, the trio has developed an oddly intuitive rapport. A Necks concert can be a near-rapturous experience, their repetitious and harmonious playing building over the course of a performance to create music that seems of one mind.

Their studio albums give a good indication of what they sound like live, but the band approaches recordings in a slightly different manner. Rather than release live studio improv recordings, the band often adds overdubs with electric instruments such as guitar and keyboards. It’s to their credit that this process is usually unnoticeable, and it’s easy to mistake many of their albums for live recordings. Their latest (and 18th) album, Vertigo, is a bit different, though. It’s the closest the band has come to a Teo Macero or Can-style interweaving of multiple parts to create the illusion of a single take. The 44-minute Vertigo has an ominous atmosphere throughout, largely sustained by an underpinning drone, eerie organ, and striking electric guitar.

“That drone evolved out of a suggestion I put to the band over a year before, and we didn’t discuss it further until doing the album,” says bassist Lloyd Swanton during a group Skype call from the band’s native Australia during a recent tour. “We had a roundtable discussion of how we might approach this album and then got cracking on generating some drones.”

“The album was built around the drone—we put it down and then improvised over it, which is somewhat unusual,” adds drummer Tony Buck, who now resides in Berlin but often returns to Australia for Necks business. “We had different inspiration and ideas over the week or so we recorded, and that always includes anything at hand. At one point I had this idea for a particular thought for a maraca I had left in Europe, so I went about making a wooden box filled with glass.”

Though the members say they never discuss what they will play before taking the stage, it’s clear there is some forethought to the shape an album may take. Even there, however, the Necks’ approach is unusual.

“Most of our records take a week or more to track, then we give it some time to settle in our minds before we go back and listen to what we’ve done, then spend about another week mixing,” Buck says. “We used to wait a year before mixing the record, but with more recent records we only wait a few weeks.”

Another distinctive aspect of the band’s method is that they don’t really do album/tour cycles. They seem to have inverted the cycle so a tour precedes a new album.

“If there’s an influence of an album on our live performances, I think it’s a subtle one,” says pianist Chris Abrahams. “We never overtly refer to an album on stage. If anything it’s the other way around—what we play live might influence the record. The current album usually reflects more on where we were a year ago.”

The Necks have played Knoxville’s Bijou Theatre with an unusual frequency for a band from Sydney—including the first Big Ears, in 2009. They’ve won over many local listeners and even referred to the city as “our home away from home” from the Bijou stage. The group does play a lot of international festivals, many of which offer less than ideal conditions for their type of performance, but they say Big Ears offers an exceptional experience for them and their audience.

“I think we take a risk at festivals, because a lot of people will just be passing by or spend 10 minutes in front of something before moving on, and we don’t play music that necessarily instantly catches the attention—it tends to slowly unfold in front of people,” Abrahams says. “Big Ears is an exception. It’s fantastic to be involved in.”

“We love Big Ears, and Knoxville is a favorite town of ours,” Swanton adds. “The Bijou is an intimate room with great acoustics. And we’ve very grateful to Ashley [Capps], since the first Big Ears festival was the gig we built our first U.S. tour around.”

The Necks perform together at the Bijou (803 S. Gay St.) on Saturday, April 2, at 5 p.m. Drummer Tony Buck joins multi-instrumentalist/composer/improviser Zeena Parkins at the Mill and Mine (225 Depot St.) on Friday, April 1, at 2 p.m. Pianist Chris Abrahams plays a solo set at the Square Room (4 Market Square) on Friday at 3 p.m.