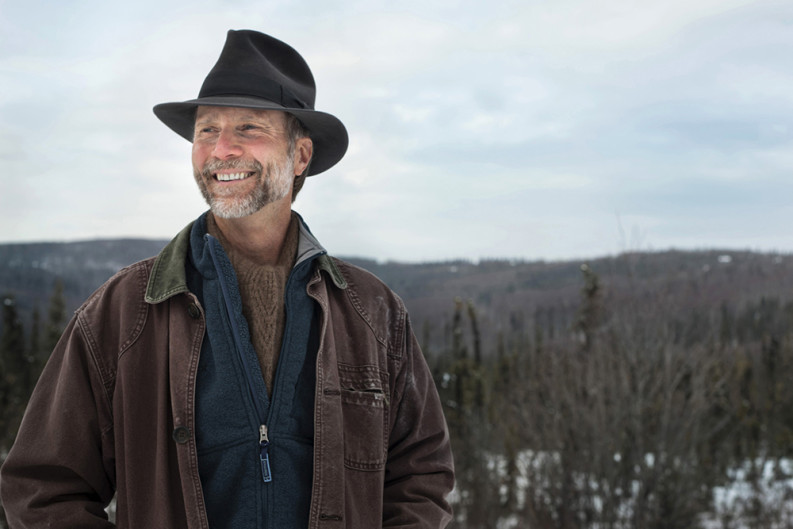 Read all of the Mercury‘s Big Ears 2016 coverage here. Visit the Big Ears website for the full lineup and schedule and ticket information.

“Life on this earth first emerged from the sea. As the polar ice melts and sea level rises, we humans find ourselves facing the prospect that once again we may quite literally become ocean.” That, in two sentences, is the entire program note offered by composer John Luther Adams for Become Ocean, the orchestral work that won the 2014 Pulitzer Prize for Music.

In our interview, Adams expanded: “I’m deeply concerned about the state of the earth and the future of the human species. But I also believe in the intrinsic value and inherent power of art as art. If my music doesn’t stand on its own, if it doesn’t move the listener as music, then all the poetic titles and extra-musical associations in the world mean nothing.”

In the following interview, conducted by email, Adams, the composer in residence for Big Ears 2016, discusses his recent work, his relationship to Alaska, and his expectations for the festival.

The Seattle Symphony’s recording of Become Ocean won the 2015 Grammy for Best Contemporary Classical Composition. As background, could you give listeners a few details on how the commission for Become Ocean came about?
I think it was 2010 when the Seattle Symphony approached me about composing a new work. A couple of years earlier I’d composed Dark Waves, a 12-minute piece for orchestra and electronic sounds. From the moment I first heard that piece, I knew that I wanted to explore that sound world on a much larger scale.
My friends at the Seattle Symphony were asking for a large-scale work. So when we sat down together for the first time, I suggested two possibilities: a new indoor work modeled after my big outdoor percussion piece Inuksuit, or something that I described as “Dark Waves on steroids.” The conductor Ludovic Morlot was intrigued by both options. To my surprise, he opted for the latter. This wasn’t the obvious choice. But it turned out to be the right one. The piece premiered on the summer solstice 2014.

You’ve written at length about your decision to leave Alaska after living and working there for four decades. In your New Yorker article, you wrote, “the vision we’d shared of an ecological utopia in Alaska had faded. … Even sadder to witness was the accelerating reality of climate change in Alaska.” When the commission for Become Ocean presented itself, did your unhappiness at seeing a years-old ideal slipping away direct you toward the plan for the piece?
I was drawn to Alaska by the land itself and by my own desire, in life and in my art, for certain qualities that place represents. Living there for much of my creative life, I came to measure my own work and everything we human animals create against the overwhelming presence of the place. I know that my music would not be the same had I not made my home there. The influence of Alaska on my creative life is immeasurable. But as global climate change continued to accelerate, my personal vision of Alaska as a place apart was challenged in an inescapable way, and I felt a growing imperative to expand my music to embrace a broader vision of the world.

A baffling comment I overheard when the 2016 festival was announced was that you were a “traditional” choice, probably because Become Ocean is written for orchestra and had been recognized by “the establishment.” Is there an irony there?
For most of my creative life my music has been considered “avant-garde” or “experimental.” Over the last couple of years, it’s begun to receive more recognition. But the fundamental nature of the music hasn’t changed. So it makes me chuckle to hear that someone might call it “traditional.”
If you’ve heard just an excerpt from Become Ocean, you might misunderstand the beautiful surface of the piece. But if you’ve experienced the full 42 minutes of riding the waves in that sonic sea, I think you will understand that this is definitely not a conventional orchestra piece.

To say the Big Ears audiences are eclectic is an understatement. Does this potential audience alter your own presentation or assumptions you might make about listeners?
My ideal listener is someone who doesn’t care what the music is called, or who says what about it. The only thing this listener cares about is how the music sounds, and whether or not it moves them. It sounds to me like this is exactly the kind of listener that Big Ears attracts.

Would you care to comment on any of the other festival events that you will be participating in?
I’d like to extend a special invitation to anyone who may think my music is “traditional” to hear Steve Schick perform The Mathematics of Resonant Bodies for solo percussion and electronic sounds, and also to spend some time inside of Veils and Vesper, the sound installation in the old church.

As composer in residence for Big Ears 2016, John Luther Adams’ presence will be felt throughout the festival. Knoxville Symphony Orchestra, under the direction of guest conductor Steven Schick, will perform Become Ocean at the Tennessee Theatre (604 S. Gay St.) on Thursday, March 31, at 7 p.m. (The program also includes Bryce Dessner’s Lachrimae and Philip Glass’ Cello Concerto No. 2, “Naqoyqatsi,” with guest soloist Maya Beiser on cello. On Friday, April 1, at 10 p.m. at the Sanctuary (211 W. Fifth Ave.), the Chicago string ensemble eighth blackbird will perform Adams’ Red Arc/Blue Veil, along with Glass’ Music in Similar Motion and Richard Reed Parry’s Music for Heart and Breath. And the Knoxville new music group nief-norf will perform music by Adams and other composers at the Square Room (4 Market Square) on Thursday at 10:30 p.m. and Friday at 12:30 p.m. nief-norf will also appear at the festival finale, a performance of Adams’ large-scale piece Inuksuit, at Ijams Nature Center on Sunday, April 3, at noon.