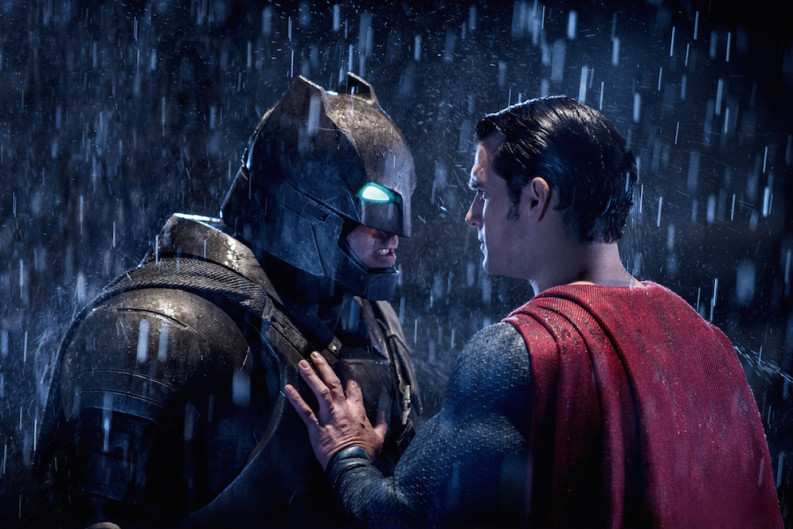 This week’s issue hits newsstands on the eve of the eve of my 40th birthday, so while I’m waiting for the shuttle to Shady Pines and yelling at everyone to sit up straight and turn down their damn stereos, I might as well take a few minutes to complain about Batman v Superman: Dawn of Justice.

This is all going to sound very get-off-my-lawn and I’m sorry about that, but it’s not my fault; it wouldn’t be happening if the editors had let me review that new Sally Field thing like I wanted. But life is terrible and there’s nothing anyone can do about it, so here we are.

Come to think of it, “life is terrible and there’s nothing anyone can do about it” could sum up DC’s thematic vision for much of its Extended Universe. Even Frank Miller’s dystopian, ultra-grumpy Dark Knight Returns never felt as pointlessly hateful and dour as DC’s latest superhero epic, which pits Supes and the Bat against one another in a grudge match that’s both brutally violent and astonishingly silly.

It offers a few pleasures, most notably in the form of a supporting cast that includes Gal Gadot in a woefully underwritten turn as Wonder Woman. But why does it have to be so unwaveringly ugly in tone, content, and execution?

I get that DC has positioned itself as Marvel’s polar opposite, and that the company has gotten a lot of mileage out of its grittier take on superhero tropes. That’s not new—Green Arrow’s sidekick was shooting heroin in flophouses years before I was born, and I was still plucking comics from gas-station spinner racks after school when the Joker beat Robin senseless with a crowbar and then left him to die in a warehouse rigged to explode. When I think about the Batman and Superman of my youth, I’m remembering characters who had already seen the light steadily leaching from their universe.

But at least those stories were interesting, and those events had an impact on the characters’ lives in ways that the writers cared enough to explore. Batman v Superman just wants to blow stuff up and fetishize the destruction. Look no further than its lead characters, whose dramatic functions are relegated to either punching everything within reach or standing quietly and staring at the floor while things are explained to them.

Does a Superman movie really need images of sex-trafficking victims cowering in cages, or Polaroids of a terrified, battered, and gagged woman with misogynistic slurs scrawled on her forehead? Apparently a Zack Snyder one does. Batman v Superman finds the director doubling down on meanness and gloom even as he addresses some of the criticism aimed at Man of Steel’s wanton violence. It’s as if he’s responding to those complaints without really understanding why anyone made them.

The problem isn’t Henry Cavill, whose Superman is dutifully earnest and dorky, or Ben Affleck, whose turn as Batman is really pretty good considering he’s forced to spend the movie devising a sadistic plot to assassinate Superman and spouting the Bush administration’s One Percent doctrine almost word-for-word to justify the murder. It certainly isn’t Gadot, whose globe-trotting socialite Diana Prince, aka Wonder Woman, provides nearly all of the movie’s fleeting moments of levity and fun.

It’s Snyder’s ugly vision that makes BvS such a slog. It taints the film’s visuals—everything is dark and murky until it explodes—as well as its pretenses of thematic heft. Snyder’s world is bleak and grim without pulling off any of the operatic drama or cinematic thrills that marked Christopher Nolan’s Batman movies.

To be fair, there’s some good stuff here. There’s plenty of fan service, most notably when it comes to unpacking the nightmare sequences that make up a considerable chunk of the film and presumably set up the upcoming Justice League movies. But in the end, it doesn’t matter. Snyder is making so much money that he could buy me and force me to fight other broke film critics in the trunk of his sky yacht, so who cares what I think?

Now please sit up straight, turn down your stereo, and get the hell off my lawn.