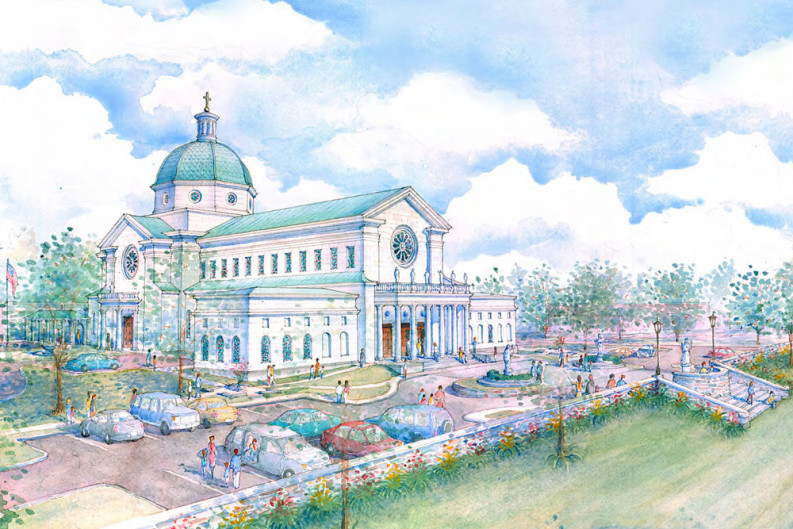 If history is an arc, as the American 19th-century transcendentalist Theodore Parker conceived the moral universe, in the world of architectural production that curvature is a pendulum’s path. At one of its amplitudes are works that replicate a faithful image of the past. At the other extreme are works, the goal of which tends to be shock and awe.

There is nothing in Knoxville that demonstrates the latter. One must look elsewhere, but not far: the formal audacity of Randall Stout’s addition to the Hunter Museum of Art, Chattanooga (2005); the color-laden chutzpah of Daniel Libeskind’s Ascent at Roebling’s Bridge (2008), Covington, Ky.; Thom Mayne’s (Morphosis) impossibly complex Campus Recreation Center (2005) or Peter Eisenman’s impossible-to-navigate Aronoff Center for Design and Art (1988-96), both on the University of Cincinnati’s forward-looking campus.

The commercial, institutional, and civic buildings in Knoxville do not now, and for the most part never have operated, at the extreme architectural margins any more than do most of the organizations that occupy them operate at the political margins; they tend to be “left-of-center” or “right-of-center.” But there are always exceptions. 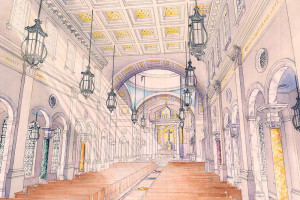 The new Sacred Heart Cathedral, the most recent exception to this rule, has been under construction along Northshore Drive since April 2015. Slated for completion in fall 2017, its design is the work of McCrery Architects (in partnership with Barber McMurry who are the architects-of-record overseeing local on-site logistics). McCrery Architects, a Washington, D.C. firm, proudly practices something they call “Traditional Architecture.” Their website explains: “The proper practice of Traditional Architecture embraces the best of all ages and styles in a timeless, unbroken chain of lasting beauty and utility. Tradition is necessarily modern and innovative. Only when grounded in historic precedent can architecture intelligently propose and project the future.”

Culture has always been rooted in the constancy of tradition. Yet, history teaches us that only dying cultures invest in those that never change. That there is nothing of necessity, “modern and innovative,” about tradition goes without saying. Physicians do not bleed their patients nor administer purgatives to balance their humors; the city of Charleston, S.C., is no longer a principle port of entry for the sale of human beings; women have the same right to control their bodies as men. And while knowledge of antecedents to one’s work is fundamental to any critical practice, one need not ground all design in “historic precedent” in order to “intelligently propose…[a] future.”

Traditional Architecture is relatively harmless as a belief system except, as with any other, when it is mistaken for a categorical imperative that leads to Truth. This potential trap of tradition notwithstanding, whether or not one favors Modern architecture, it’s difficult to put a positive spin on the diocese’s existing cathedral, to which the new cathedral’s design is an extreme response. Were it not for the cathedral’s crucifix-adorned campanile, one could easily mistake it for the school’s gymnasium. Nicholas Pevsner had a point when he argued in the middle of the last century that bicycle sheds were mere buildings while cathedrals were architecture. Surely the existing cathedral seems better suited to house 10-speeds than worshipers. And while one can worship anywhere that God is, and persons of faith tend to agree that is everywhere, being wrapped in an architecture that reinforces solemnity, sacrality, and the utter joy of communion certainly doesn’t hurt the enterprise. That the new cathedral will do just that is difficult to dispute. That its design is in any way innovative is a matter much easier to dispute.

The new cathedral, once completed, will seat almost as many as can fit in the Tennessee Theater. Its design will be a memorial of sorts to the art and architecture of the Italian late Renaissance, when mass was spoken in Latin to a church filled with largely illiterate suppliants who probably stood throughout the service in unheated, pew-less naves, listening to a language they did not speak, staring at images they did not fully understand. When churches of this ilk were being built for the first time in Rome, few knew the name Martin Luther outside of Wittenburg, all of the churches in England were Catholic, and the Medicis were enjoying two decades of popedom in Rome. 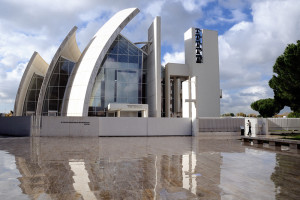 In contrast to Knoxville’s new cathedral, in 1995, the Bishop of Rome (also known as the Pope) decided to build a new church for the Vatican after concluding, ironically, that Vatican City had no convenient place for its population of 900 and its many visitors to worship. Pope John Paul II invited six internationally famous architects to compete for the commission, and chose Richard Meier, who designed a markedly modern building, completed in 2003. One of the church’s most conservative popes of the last half-century chose a Jewish architect from New York to design a decidedly “non-traditional” church to celebrate the 2,000th anniversary of Christendom, built in the shadow of Michelangelo’s dome. Meanwhile, rising from its foundations in West Knoxville is a building, the design of which is on the cutting edge of the 16th century. Why would the seat of Roman Catholicism in Knoxville choose this as the model for its 21st-century cathedral?

All of which brings us to another of tradition’s traps: If one chooses the past as a model for the future, which past do you pick? How far back do you go? How, when, and where do you know to stop? These are questions architects have been asking since the early 19th century; for some, the matter remains unresolved. Rome during the High Renaissance may seem an obvious choice, but that’s hardly so for all. Indeed, 150 years ago the clearer choice for Catholics, particularly in England, would have been the 13th century and Gothic architecture; it continues to stoke the fires on the Knoxville campus of the University of Tennessee, albeit unrecognizably. 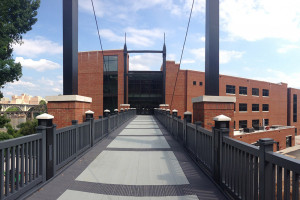 There are several examples of left-of-center architecture at its best in the metropolitan area, including the new pavilion at the Knoxville Botanical Gardens (De Leon & Primmer, Louisville, Ky.), the challenging instauration of the Southeastern Glass Building at the edge of the West Jackson Historic District (SandersPace Architects, Knoxville), the East Tennessee Children’s Hospital Surgery & NICU Addition still under construction in Fort Sanders (Shepley Bulfinch, Boston/ Barber McMurry Architects, Knoxville).

Uninspired examples of right-of-center architecture dominate recent and contemporary construction throughout Knoxville, from its downtown core to its westward sprawl. It includes a wide range of building types: South College edging Interstate 40; Hampton Inn and Suites at the corner of Cumberland and Main; the Colony Plaza in the 5000 block of Kingston Pike; any number of recently completed or current projects on the University of Tennessee’s Knoxville campus.

Still, one can find excellent recent architecture on the UTK campus, if you know where to look. As one navigates Neyland Drive, it is easy to look past the John D. Tickle Engineering Building (Grieve Associates Architects, 2013) that buttresses the campus as it slouches toward the Tennessee River. Unlike the much larger and higher-profile Min Kao Electrical Engineering & Computer Science Building, the Tickle Building actually looks as if the work of engineers happens within its bulky and humorless masses. Although smaller than Min Kao, the Tickle Building seems more massive, and its massing better balanced, its masonry facades more thoughtfully articulated—less sizzle, more meat. 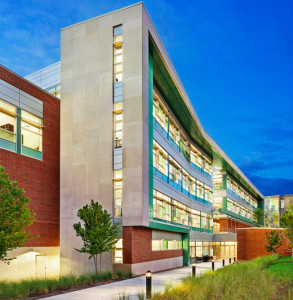 The Natalie L. Haslam Music Center (Barber McMurry Architects, 2013) is one of the finest buildings completed on the UTK campus in a generation. As a work of architecture it is more prominently placed and more complexly situated than the Tickle Building, its forms more lyrically dispersed, its material palette more varied. Moreover, beyond its use as a school for music, it is also a “pass-through building”—similar to its much-maligned neighbor, the Art & Architecture Building (McCarty Bullock Holsaple, 1981). Although its atrium space was much contracted during the project’s design development phase owing to key site and budgetary constrictions, it nonetheless enables one to move across campus north/south through the building from Volunteer toward Joe Johnson Drive. The Music Center’s south façade (and the pass-through lobby) is designed in anticipation of the quadrangle planned to replace the existing parking lot behind it.

Anything akin to the Music Center, however, is not to be repeated anytime soon on the UTK campus. Indeed, the hostility among many campus administrators toward the character of the Music Center is almost as great as what has been heaped upon the Art & Architecture Building. The Joint Institute for Advanced Materials on the university’s Cherokee Farm Campus was designed at the same time and by the same firm, as was the Music Center, yet it is only now being occupied two years after the center’s completion, and only partially.

The next installment of “Past-Forward” will focus on why forward-looking buildings such as the Joint Institute (or the Music Center) can and will be built on the Cherokee Farm Campus, and why in the foreseeable future, they are all but impossible to realize on the campus of UTK—and what this architectural conundrum says about the institution it represents. 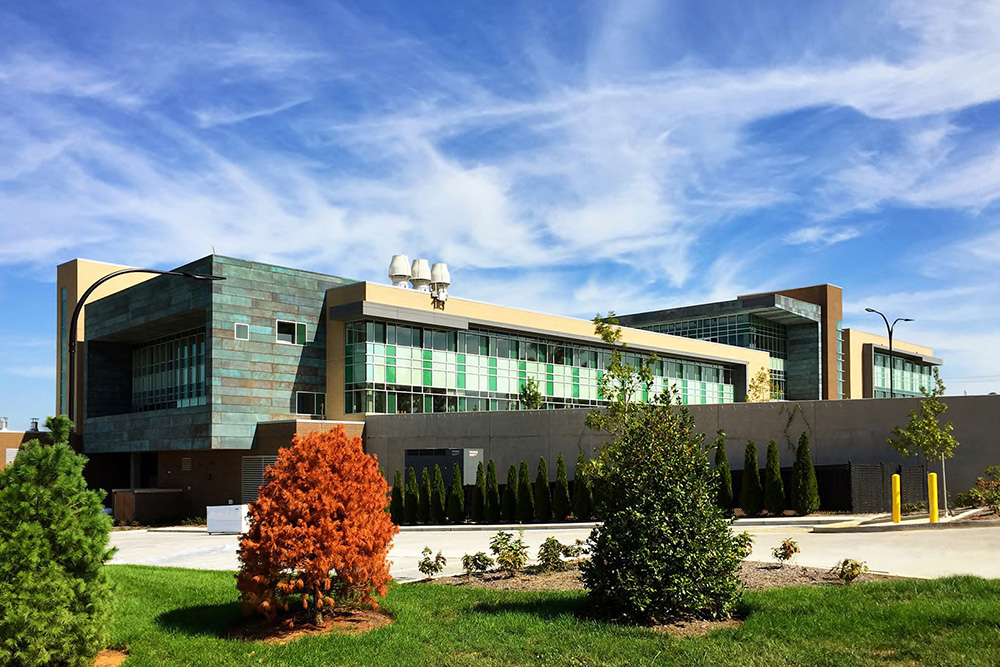