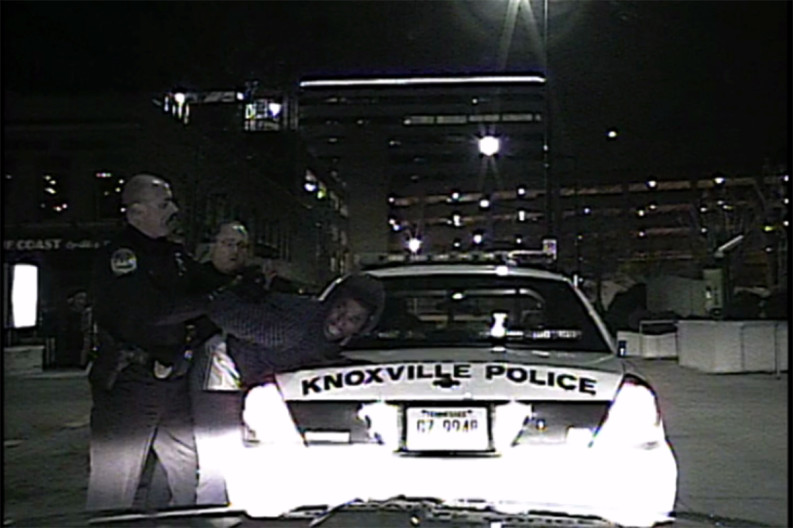 A local Black Lives Matter activist found himself behind bars on charges related to causing a disturbance and standing in a roadway after an encounter with a Knoxville Police officer who declined to give his badge number.

David Hayes was arrested in the early morning hours of Friday, March 11, on Wall Avenue near Market Square on allegations of disorderly conduct and blocking a roadway, police records show. He was booked into Knox County Jail on a $500 bond.

Arresting officers reported that Hayes refused police commands to get out of the road and caused a scene, making “unreasonable noise” leading to his arrest. But dashcam video of the encounter calls into question some parts of that official narrative. Most notably, neither of the officers involved can be heard telling Hayes to get out of the road or that he shouldn’t be in the road, even though they arrested him for that infraction. Hayes began yelling expletives after officers started handcuffing him, though there were a few tense exchanges before the arrest. (See videos of the arrest below)

Hayes maintains he did nothing illegal, saying he approached the officers that night to ask about “a fellow community member,” an inebriated man being placed in the back of a squad car, exercising his right to hold police accountable by asking where they were taking the man, how he could get in touch with him, and for the police officer’s name and badge number before things went downhill.

Hayes denies he ever got in the way.

“There was never any moment when I impeded them in any way. At any point they could have just said ‘whatever’ and gotten in the car and left,” Hayes says. “The big thing is not just about me, it’s about how police abuse their power around the use of things like ‘obstructing a sidewalk’ and ‘disorderly conduct’ to go after a lot of folks,” alleging those charges are overly broad and can be used to cite a person for just about anything.

Rausch asked to meet personally to discuss the incident last week after the Mercury filed a Public Records Act request seeking documents and video. He said he wanted to clear up any misconceptions that the arrest was related in any way to the Black Lives Matter movement or protests. In the video, Hayes identifies himself as a BLM member shortly before being handcuffed by police, but later said he does not think officers immediately knew who he was or of his past activism.

“Clearly these officers were trying to care for somebody that needed medical attention,” Rausch says. “He [Hayes] interjects into it and actually delays the opportunity for us to provide medical attention to this individual, because now we have to deal with him because of his attitude and what he’s done.”

Rausch says the matter was brought to his attention after it rose through KPD’s chain of command. A few hours after the arrest, Officer Starr wrote an email to his supervisor titled “Incident with BLM member” detailing the encounter.

According to that email, after Hayes asked officers how he could get in contact with the man they were transporting, “Hayes then asked for my badge number and when I asked why he stated that he did not trust us at which time I began to get into my cruiser to leave,” Starr wrote. “Hayes then stated ‘if anything happens to this brother, I will find you and fuck you up.’ Hayes then identified himself as being with Black Lives Matter and asked if we knew what they were doing across the country, at which time I told him he was standing in the street and needed to get on the side walk [sic]. Haynes [sic] began to raise his voice and refused a lawful order to get out of the street at which time Officer [Jeff] Allgood and myself placed him [in] custody for obstructing the roadway and disorderly conduct.”

Dashcam video of the incident backs up most of that narrative, though according to what can be heard on audio recordings it appears Hayes was never ordered out of the roadway. A transcription of the exchange provided by KPD does not include a reference to any such command. Hayes appears to start yelling expletives after officers begin handcuffing him. The arrest affidavit specifically cites “unreasonable noise” as the disorderly conduct offense.

It’s also hard to discern exactly what is said at different points in the video, in part because the radio was still playing in Starr’s police car, and the quality of the audio recording varies. It appears Hayes may say, “If anything happens to this brother I will find you and I will fuck you all. You’re going to pay for it.”

Rausch has characterized that as a threat towards the officers, though he noted that Hayes later said he meant he would come after them legally in response to a similar statement he made while handcuffed in the back of a patrol car. When asked specifically about the incident, Hayes said he never said “I will fuck you up” or made any other physical threats directed towards any of the officers. Again, the audio is unclear. Those comments were note cited as a reason for his arrest.

“In our opinion he clearly violated the law. I think the officers made a good call,” Rausch says. “He was arrested for obstructing a roadway and disorderly conduct. The obstructing a roadway [offense] is interesting because it is very wide,” meaning it could be used for obstructing any number of thoroughfares, including sidewalks, waterways, halls, or elevators, he later clarifies, “but the real charge they had was disorderly conduct.”

Asked if the officer was required to give his name and badge number, Rausch says: “The officer should have given it. There’s no law against it, but our policy says if someone asks for it, give it to them, give them your name and badge number. I think what it was is, it was just a shock to the officer that here we’re trying to help somebody and this guy comes up and starts raising cane with you.”

KPD spokesman Darrell DeBusk later said in an email that neither officer would be subject to disciplinary action or further investigation since no policy violations had occurred.

Some local activist groups–including BLM Knoxville, Knoxvillians Against Injustice, and Showing Up For Justice-865–have organized a letter writing campaign to Knoxville Mayor Madeline Rogero and Knox County District Attorney General Charme Allen in an effort to have the charges against Hayes dismissed. Hayes was arraigned in Knox County Sessions Court on Friday. A preliminary hearing is set for April 8.

Hayes has another pending charge for allegedly disrupting a public event in October when he and another activist spoke out during a speech by Gov. Bill Haslam at a press conference announcing a $12.5 million incentives deal for Regal Entertainment Group. Go to knoxmercury.com to view dashcam video of the arrest and related documents.

Copies of the arrest affidavits are available here and here. Starr’s email can be read here. A transcription of the incident provided by KPD (with one possible correction) is available here (warning: lots of curse words).