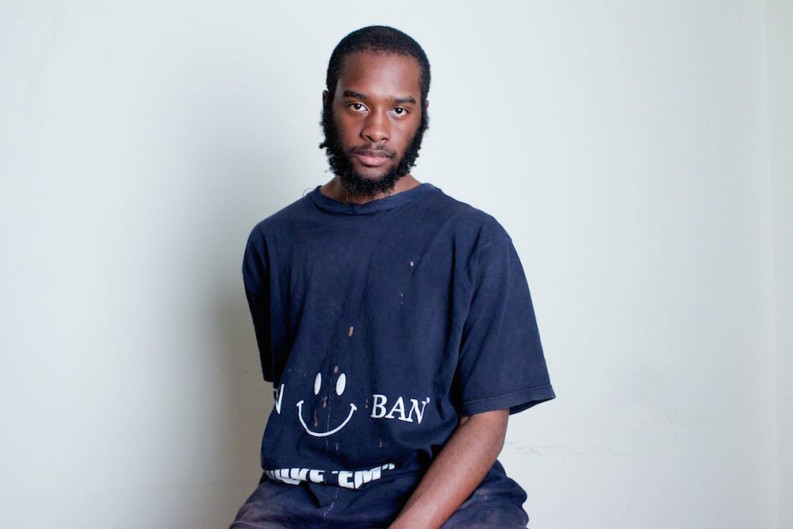 Most musicians love SXSW. Or they feel like they have to say they do. But Baltimore rapper/producer Abdu Ali isn’t like most musicians.

“I’m kind of anti-festivals a little bit,” he says the day after the first of four performances at the Austin, Texas, mega-music showcase. “The crowds and shit, I get anxious. It’s intense, and I’m a little hermit. I really only go out when I really want to see somebody.”

Ali, 25, is technically three weeks into a five-week tour, but the way he sees it, he’s really been on the road for one big tour that stretches back for most of the last year and a half. After graduating from the University of Baltimore in the spring of 2014, he took his music—a futuristic, experimental mix of old-school and alternative hip-hop and Baltimore’s distinctive club music—on a short tour that ended in Brooklyn, which he thought was going to be his new home and the headquarters from which he would launch a full-time career. At the end of that summer, though, he was back in Baltimore, with a new perspective on his hometown.

“I was just over it,” he says of New York. “It’s straight-up biz. I feel like in Baltimore, it can mean something to be from there, and I can build a career there. In New York I’d be just another artist trying to make it. The landscape, the environment, the neighborhoods didn’t mean much to me, like they do in Baltimore.”

Returning home wasn’t an easy choice. Since he started releasing music in 2012, Ali has criticized Baltimore’s music scene, which supports traditional commercial hip-hop and indie bands but, he says, has stifled artists of color who try to do anything outside those accepted formats.

“The music scene in Baltimore is weird,” he says. “It’s still kind of segregated, not just racially but genre-wise, too. … The street rappers have their fans, and they can pop off in the city. And you have the indie bands, who are predominantly white, like Dan Deacon or Lower Dens or Future Islands, that pop off and get support, not just locally but outside the city, whether it’s a booking agent or a label that comes to them. But kids like me, we’re trying to figure our own way.”

Things seem to be changing, though. Since he came back from New York, Ali and a group of young like-minded colleagues—politically progressive, mostly black and queer or LGBTQ-friendly—have built an alternative network of underground venues and DIY dance parties. They’re making music that’s provocative and challenging but is also conscious of Baltimore’s artistic heritage, especially the hip-hop-heavy club music established in the 1980s. Last week, Ali and his compatriots Greydolf and JPEGMAFIA were the subjects of a cover story in the City Paper, Baltimore’s alternative weekly, which has been a target of Ali’s criticism in the past. In the story, City Paper arts editor Brandon Soderberg called the new scene “Baltimore’s most high-profile DIY music moment since Wham City’s hey-day.”

“The past year or so, it’s been a little more colorful, especially from the black underground kids,” Ali says. “We just said, fuck it, we’re going to create our own platform and do our own shows and bring it into these institutions or places that are usually governed by white people and do our own thing.”

The success that Ali and his contemporaries have had over the last several months has changed their priorities and perspectives. Ali has streamlined his music—his latest song, “I’m Alive,” released in February, pushes the experimental flourishes into the background and political consciousness to the forefront; with its forthright lyrics and jazz grooves, it bears some resemblance to Kendrick Lamar’s To Pimp a Butterfly. It’s impossible to separate the refrain, “I’m alive, I’m alive/Don’t be surprised” from the #BlackLivesMatter movement and the protests in Baltimore last summer in response to the death of Freddie Gray. “I’m Alive” is more direct and straightforward yet more powerful than anything else Ali has recorded.

“I want to move in a direction where my music is a little more open and soulful,” he says. “A lot of my older stuff is harder and more experimental, which is cool, but I’m trying to keep my edge and at the same time make it more universal. I like the idea of having a lot of different people enjoy my music.”

The long-term goal, Ali says, is to make Baltimore a friendly and supportive place for artists like him.

“I want there to be more kids like me popping off music in the city and not feeling like they have to go to New York and give up their souls to survive,” he says. “They can thrive locally. Not only is that good for the artist, it’s good for the community—it inspires the next generations to be creative, too. I want more booking agencies, more record labels, more publications to focus not only on Lower Dens or Future Islands or street rappers but the kids who are black and brown who are doing crazy, progressive shit.”