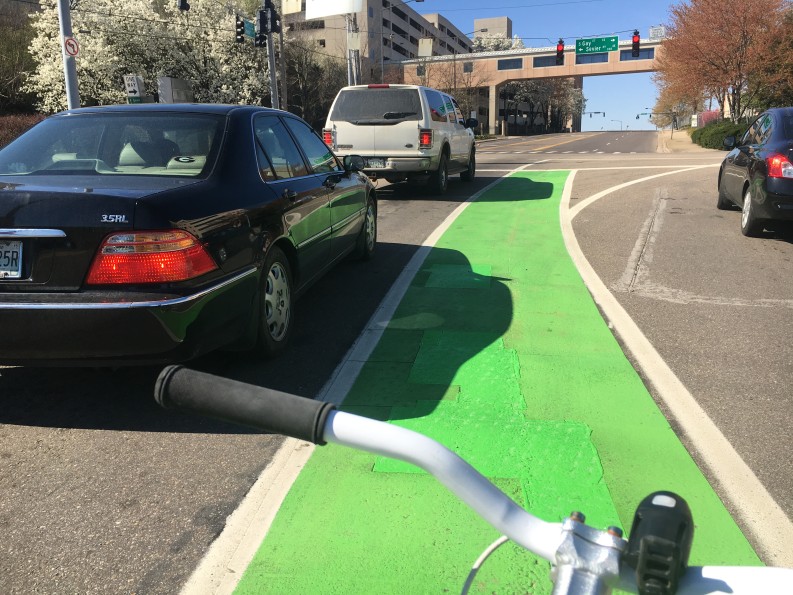 The city of Knoxville has announced it’s newest “green” initiative. No, this one isn’t aimed as cutting paper use or saving the environment (though if more people bike instead of drive it could cut pollution and improve health). The city is painting some bike lanes green, starting with some major intersections, in an effort to meet federal standards and improve safety for pedal pushers around town.

In a press release, city honchos said the color-coated bike lanes will serve dual purposes, helping alert and remind drivers that cyclists may be on the roadway and also clearly mark the safest bike paths through large intersections. Not all bike lanes will go green, only lanes in intersections where there is a higher potential for conflict between cyclists and drivers, explains spokeswoman Kathleen Gibi.

“It’s just at the intersections, so we wont be painting the town green,” she says.

The first green bike lane was installed last year at the intersection of University Commons Way and Joe Johnson Drive as part of a pilot program. The second one was recently installed at an intersection just south of the Gay Street Bridge. These green intersections cost between $1,800 and $2,500 each, depending on the streets configuration and how much paint is needed, Gibi says.

Officials noted that the second green bike lanes was part of a larger $14,000 street improvement project along the South Waterfront, which included restriping Sevier Ave. and adding bike lanes from the Gay Street Bridge to James White Parkway. Mayor Madeline Rogero said it fits into the city’s larger efforts to boost bicycle infrastructure.

“I love this project, because it quite literally connects several of my initiatives–promoting alternative transportation and sustainability, continuing downtown improvements, redeveloping the South Waterfront and enhancing the Urban Wilderness,” Rogero said in a statement.

The initiative is being managed by the City Engineering. The green “paint” used isn’t actually paint, it’s a thermoplastic melted on the street and is supposed to last many years and provide additional traction for cyclists.