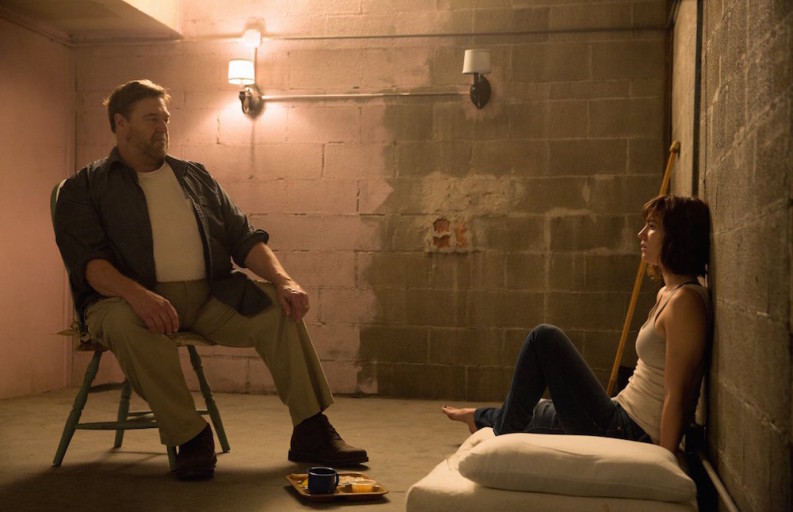 It’s tempting to think of 10 Cloverfield Lane as a stripped-down successor to Matt Reeves’ 2008 found-footage kaiju flick Cloverfield, and in the most obvious ways, it is. First-time feature director Dan Trachtenberg’s sort-of sequel is a tightly controlled, precisely calibrated chamber piece that spends most of its time with three characters in an underground bunker, eschewing the city-stomping chaos of its predecessor. When you put the films side-by-side, though, it’s the original that feels smaller and thinner by comparison. Cloverfield was a lot of dopey fun, and it re-energized the giant-monster subgenre, but 10 Cloverfield Lane is a smart, sophisticated, and immersive thriller that eclipses it at nearly every turn.

A huge factor of the new film’s appeal stems from the pair of engaging performances at its center. First we meet Michelle (Mary Elizabeth Winstead—why isn’t she a huge star yet?), a young Louisiana woman who’s making a hasty exit from a life that will be only vaguely sketched out over the course of the movie. It’s best to go into this film knowing as little as possible about its plot and characters, so let’s just say that Michelle’s flight is interrupted by an event jarring enough to elicit gasps and jumps before the title card even comes up. It’s that sort of movie.

When Michelle awakens, she’s confined in a room she doesn’t recognize, her leg chained to a pipe and an IV drip stuck in her arm. And here’s where 10 Cloverfield Lane really starts to get its hooks in us: Rather than wasting so much as a moment cowering or breaking down, Michelle immediately turns her attention to solving her problem.

That problem turns out to be Howard (John Goodman, by turns terrifying and charming), a doomsday prepper who tells Michelle that he’s saved her from a catastrophic event that has killed everyone she knows. He’s sketchy on the details, but he’s adamant that even the air above ground is toxic and that Michelle’s only hope is to ride out the apocalypse with Howard and another survivor, Emmett (John Gallagher Jr.), who is also enjoying Howard’s dubious protection.

Is Howard a paranoid but well-meaning prepper, or does he have something more sinister in mind for Michelle and Emmett? And then there’s the movie’s most unsettling question of all: Which of those realities holds the most disturbing implications for Michelle?

Definitive answers don’t come quickly, and most of 10 Cloverfield Lane unfolds at a pace that’s more in line with a locked-room mystery than a sci-fi blockbuster. “Hitchcockian” is a word that gets thrown around far too often in discussions of cinematic suspense, so let’s just say that Trachtenberg has apparently been watching some classic screw-turners and taking plenty of notes.

Part of the movie’s impressive sense of mystery and tension comes from the marketing choices made by producer J.J. Abrams’ Bad Robot Productions—these days, it’s a rare treat to go into a movie knowing almost nothing about it—but the lion’s share of credit goes to Trachtenberg and his creative team, which includes screenwriters Josh Campbell, Matthew Stuecken, and Whiplash writer/director Damien Chazelle. The script is lean and taut, with lines that seem like throwaways often turning into tripwires. That careful calibration extends to the film’s visuals; gone (thankfully) is the frantic handheld aesthetic of Cloverfield, replaced by cinematographer Jeff Cutter’s deliberate, precise camera work.

By the time 10 Cloverfield Lane gets around to the business of tapping into the franchise’s creature-feature through line, you won’t care whether it’s monsters or sock puppets lurking outside the bunker. It was originally conceived as a stand-alone thriller called The Cellar and then retooled to fit the Cloverfield brand, but at least to me, the third act surprises don’t feel tacked-on or disposable. I might be in the minority here, as audiences are sharply divided on how well the franchise tie-in works. But that’s a discussion for a different place, where it can be walled off by monster-sized spoiler warnings. Either way, 10 Cloverfield Lane teases some exciting possibilities for franchises whose stewards are willing to bet on great storytelling.