A Lofty View of the North Broadway Kroger, and How It Earned Its Nickname - The Knoxville Mercury 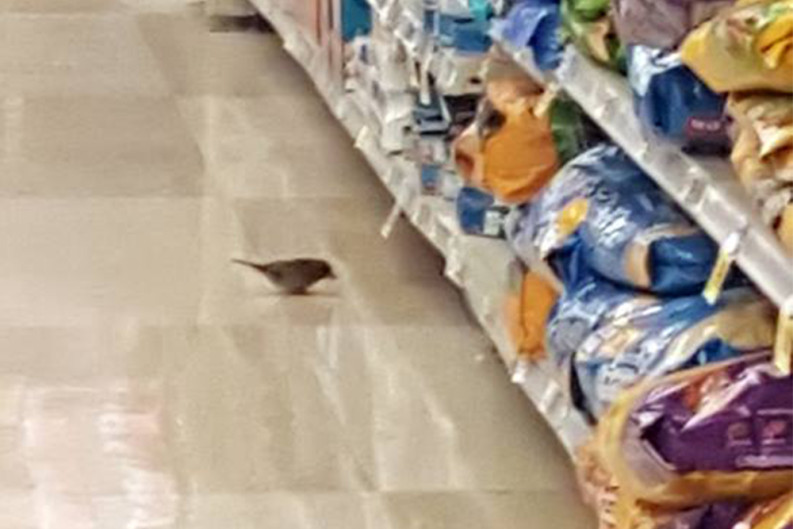 A wild house sparrow has been living in the North Broadway Shopping Center Kroger, aka the “Fellini” Kroger, for months. The bird has sparked interest and affection among customers, with candid photos posted on social media, at least two threads on the Friends of the “Fellini” Facebook page, and the suggestion that the bird should have its own Twitter account.

The sparrow’s tweets and dramatic swoops overhead bring a fresh perspective to the Kroger experience, usually traversed in linear fashion, cart wheels squeaking on the vinyl as shoppers etch-a-sketch their way up and down aisles. The bird draws attention to the lofty ceilings and alternate dimensions of the store; now perched on the chip display, now jumping aisles to peck at spilled cat food, now in the rafters among the escaped birthday balloons. It is as if we are shopping in an aviary.

“Now that we’ve visited other area grocery stores, we prefer the quirky character of Fellini’s employees and shoppers,” says Jill Dyer Green, who recently snapped a photo of the sparrow and posted it online. “We look for the bird on every visit now. It’s fun. A welcome change from the sleepy robotic monotony of other stores. Whatever happens to the little feathered fellow, I hope he is treated humanely.”

Apparently the bird trap, a white box with a spring lid atop a case in the produce department, continues to be unsuccessful. In January a rumor circulated that employees are tired of the bird and are planning to shoot it down with a BB gun.

The graphic artist and performer Ken Clayton says he gave Broadway Kroger the name “Fellini Kroger” in 1971 after moving into a house on Thompson Place.

“I had seen Fellini’s Satyricon that spring,” says Clayton, “[Fellini] searched Europe for extras that were truly unique without makeup or costume devices. I noticed quickly that the old Broadway Kroger denizens rivaled if not surpassed the variety in Satyricon. At the time I was just starting on my master’s at UT and had several frat brothers and friends who lived in the Old North Knoxville area. I started telling them that the locals who shopped there reminded me so much of all the weird characters in Satyricon that shopping there was like being in that Fellini movie.

“We used to have lots of parties and friends over and we’d send them to the Fellini Kroger to get beer or ice or snacks. You have to realize that the old Broadway Kroger was not the modern store we have today but a smallish store with cramped aisles populated by a plethora of strange, even scary, folks. It was truly a trip to another dimension for a college frat boy and his pals. It was also a time roiling with cultural change and I am sure we appeared as a foreign and unfathomable to them as they did to us. We viewed each other with wary suspicion and haughty disdain. I have no idea how the local residents referred to us long-haired bearded freaks in bell bottoms and tank tops, but there was never a more descriptive term for that place than ‘Fellini Kroger.’”

The name has stuck, despite the challenge among some, namely musician and performance artist Jack Rentfro, that “Gummo” Kroger, after Harmony Korine’s 1997 film set in third-world parts of Nashville, is a more culturally and aesthetically appropriate fit.

“We may be living in the last days of empire (Satyricon) but a guy in a wheelchair yelling at everyone in the parking lot, and poor, zombified people using up their EBT cards on TastyKakes and diet store-brand colas, comes a lot closer to the trash-horror of Harmony Korine’s Gummo than any of Fellini’s saturnalian, pansexual circuses,” Rentfro says,

Rentfro continues, “Have you ever seen Marcello Mastroianni riding horsey on a beautiful young party girl there [Fellini’s La Dolce Vita]? If we must have a cinematic reference point, [Gummo] is a far more accurate evocation of Broadway Plaza and its notorious anchor store.”

Why the eagerness for a cinematic reference point at all?

Reflected on a screen, even the most degrading and bizarre circumstances achieve glamour. Designating the Broadway Kroger an art zone transforms the gaze of a shopper into a camera lens. Poverty and insanity become high art. It may be debatable whether participating in the cinematic reference game fosters tolerance and celebration of diversity or makes someone a condescending asshole. But the Friends of Fellini Kroger seem to have a self-deprecating awareness of their own eccentricities, understanding they may well be part of another shoppers “Honey, you’ll never believe what I saw at Fellini Kroger” story.

Imagine living in the Fellini 24/7 with a bird’s eye view of the place. If only sparrows had tiny movie cameras, just think all the priceless footage she might be collecting.

I wanted to see if Kroger corporate management would admit to plotting to shoot the bird down with a BB gun.

Kroger spokesperson Melissa Eads would only say, “We work with professionals to catch and release the bird and that is what happened in this case.”

This Old World bird is not native to America, so it is not protected by federal wildlife laws. It is legal to eat it, or keep it as a pet. The Wikipedia entry for house sparrow says it is “a symbol of lust and sexual potency, as well as of commonness and vulgarity.”

As of press time, the bird remains free in the store.

As appealing as I find the concept of Fellini, I count myself as an advocate of a moniker update. It was the sparrow eating spilled cat food in the pet aisle that struck me as less peacock-in-the-snow of Fellini’s Amarcord, and more slurping-spaghetti-in-the-bathtub, Gummo style.

Fellini. Gummo. What do you think?