Construction of Knoxville's $100,000 Gravity Trail Is All Downhill From Here - The Knoxville Mercury 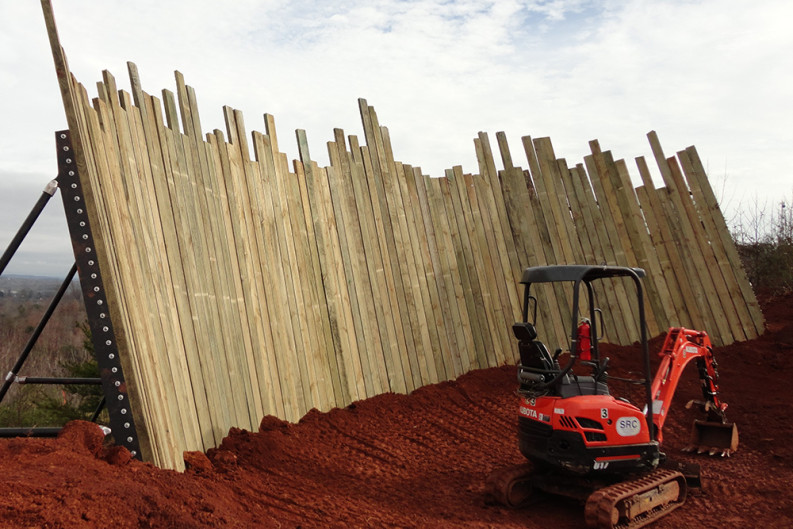 The pickup truck groans and lurches forward as it slowly maneuvers its way up the brand-new gravel trail to the build site overlooking South Knoxville. Freshly overturned dirt and newly cut branches line the road.

A tree branch slaps the windshield of Brian Hann’s mud-spackled F-250 as he turns another corner up the hill.

“Ah, I say I’m going to cut that thing down every time I come up here,” Hann grumbles. “Every time, every time…”

Hann is the project manager for all trail construction in South Knoxville’s soon-to-open Baker Creek Preserve, which includes the area’s first-ever gravity trail for mountain bikers. At the top, Hann greets some of the workmen on the project, one of them with chainsaw still in hand.

Nick Pavlis, Knoxville City Council member for the 1st District, is tagging along this morning to check on the progress of the double-black diamond mountain bike trail here in the Legacy Parks Foundation’s newest addition to the Urban Wilderness.

“I never had any idea it would be this magnificent,” Pavlis says. “It’s beyond anything I could have comprehended.”

The former vice-mayor spends most of the trip taking pictures and asking questions, all the while obviously excited about the progress on the trail and what it means for South Knoxville. “It puts South Knoxville on the map,” he says.

A double-black diamond is an expert-level trail, and the Devil’s Racetrack has earned that ranking and then some. The wooden planks of a 10-foot-tall arcing wall greets visitors, awaiting bikers to challenge it. Below that, a rock garden leads to the bottom of the hill with a small jump half-way down for the bravest mountain bikers. With its name harkening to South Knoxville’s history of moonshine, Devil’s Racetrack is designed to allow mountain bikers to use gravity to propel them downhill, and it became famous long before its construction.

Last summer, the Appalachian Mountain Bike Club won a $100,000 grant competition from Bell Helmets to build the 7-mile Devil’s Racetrack. The money is being spent on hiring national trail experts for its creation, including the International Mountain Biking Association’s Trail Solutions division for most of the trail’s construction, world-renowned mountain biker Neko Mulally to design the rock garden, and stone mason and trail-builder Knight Ide to build it. Other expenditures include machine rentals.

The trail is now about half-finished and will open to the public in May after undergoing safety tests, says Matthew Kellogg, president of the AMBC.

“It allows us to attract a different user than we’ve had in the past. It allows them to broaden their skill base,” he says. “We’re one of very few towns that can boast we have upwards of 60 miles of trail out of our backdoor.”

The 100 acres of previously-vacant land was donated to Legacy Parks in 2013 by the Wood family. When construction is finished, the Baker Creek Preserve will have a total of eight trails, five of which are mixed-use, and three exclusively for biking. Legacy Parks is building the seven other trails with a $200,000 Recreational Trails Program grant from the Tennessee Department of Environment & Conservation, with names based on local lore like Pappy’s Way or Cruze Valley Run, all of which should be finished in May along with the Devil’s Racetrack.

A bridge over Red Bud Road (largely funded by REI) will also be finished soon to safely connect the trails with the larger Urban Wilderness South Loop, Hann says. In addition to the trails, a grant from the Siddiqi Foundation and donated time and expertise from local landscaper Earthadelic will enable Legacy Parks to create a play area near a kids’ bike loop, using natural elements and materials found on the property.

The rock garden in the Devil’s Racetrack is one of the most unique in the country and puts the trail on par with some other world-class mountain biking trails, says Hann, who also serves as chair of the Legacy Parks Trails and Greenways Task Force.

“We brought in the best trail-builders in the country to get this thing done,” he says.

The Professional TrailBuilders Association, which ended its conference in Knoxville on Friday, always builds a Legacy Trail in its host city as a parting gift and as a way to teach local mountain bikers about trail construction and maintenance. Its Legacy Trail here connects South Doyle Middle School with the adjacent neighborhood and the rest of the Urban Wilderness.

One of the best aspects of the Devil’s Racetrack and the Baker Creek Preserve is that the entire community is behind the project, Kellogg says. The boulders in the rock garden were donated by the city of Knoxville and Earthadelic, and many small business and AMBC members have donated their “sweat equity,” he says, giving residents a stake in the park when it’s complete.

“Part of our mission is to educate the public on trails,” Kellogg says, and by encouraging residents to assist in some basic trail construction and maintenance, it can lead to more interest in mountain biking and use of the Urban Wilderness. AMBC members regularly volunteer to build and maintain trails, called “trail days.” All tools and equipment are provided by the club. More info: ambc-sorba.org.