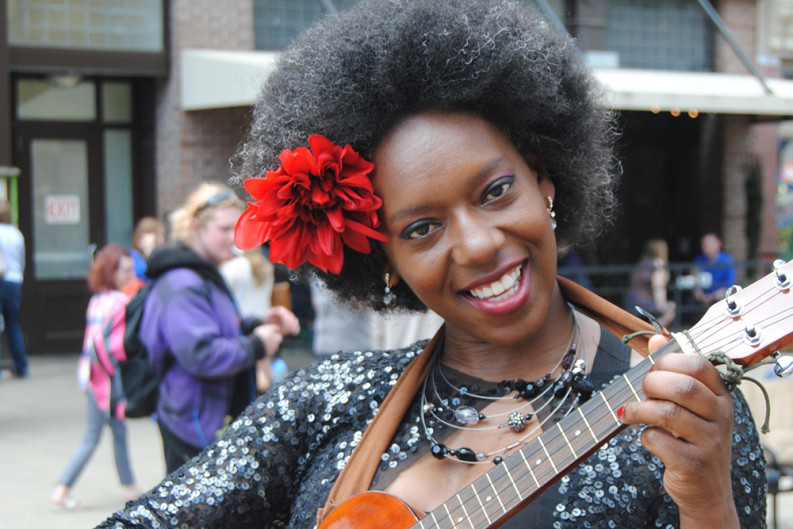 An audience member approached Kelle Jolly after a Tennessee Theatre Musical Monday appearance to tell her, “I didn’t know I liked jazz!”

“She saw the light,” says Jolly. “It was like a whole new world opened for her. That’s a beautiful thing.”

That’s the effect Jolly has on people. From her Jazz Jam on WUOT to her promotion of ukuleles far and wide to her participation in the tribute to Dolly Parton at the Bijou Theatre in January, she’s always introducing the good but unfamiliar, treading new ground, celebrating music of the present and reviving bygone coolness.

Her latest adventure, this weekend’s Women in Jazz Jam Festival, has her once again enthusiastically and doggedly bringing an underrecognized treasure to the collective attention. Her goal was simple.

“I wanted to showcase local women in jazz in one great show,” Jolly says. “I also wanted to bring regional women to Knoxville who I felt needed to be heard live.”

Performers include University of Tennessee graduate Christina Watson, who teaches jazz voice in Nashville—Jolly plays her music on the Jazz Jam—and Venus (The All Girl Band), who have performed in Knoxville with Brian Clay. “Knoxville is falling in love with them,” says Jolly. Jolly herself will perform at Scruffy City Hall on Saturday night.

Some may be surprised that, far from scraping for performers, Jolly had an abundance to choose from.

“Luckily, many of them also play instruments like piano, saxophone and guitar,” she says. “But it was hard to find a woman drummer who was familiar with jazz. I was without one until Dana Gipson, who was playing piano with the Women in Jazz Jam Festival Band, told me she switched her music-degree emphasis from saxophone to percussion. She’s a saxophone player who also plays guitar, piano, and drums. Even as a freshman jazz major, she’s overflowing with talent.”

Publicity for the festival has relied on Jolly’s signature creativity and joy.

“In general, it’s hard to know what will convince someone to spend money on you,” she says. “The best way I know is to show them why they should come hear you. That’s why I have spent the last month performing everywhere from library story times to Mighty Musical Monday to busking on Market Square.”

Jolly says she wishes she could do even more—which she plans to do as the festival grows in future years.

“If I had a bigger budget, I would have rented the Goodyear blimp,” she says. “Are they still flying that? I really wanted an ice cream-like truck to drive around and sing from. I wanted to drive around with jazz playing from the truck like the ice-cream man, with a painting by Hawa Johnson on it. Hawa designed the festival logo.”

Jolly is careful to emphasize that although this is a women’s performance, men are more than welcome. “It’s just a women-led event, not women-exclusive.”

Jolly’s husband and longtime collaborator, Will Boyd, is playing a support role, too—as he usually does in Jolly’s career.

“Oh, Will is the one who tells me to get back in the car when I cry after accidentally dropping a contract in the mail with no stamp on the envelope,” Jolly says with obvious affection. “He reminds me to keep moving forward. He helped me find musicians for out-of-town performers to hire for shows. And during the festival I’ll be depending on him to help managing the stage. He has experience serving in that role for the Knoxville Jazz Festival.”

Jolly met Boyd at South Carolina State University, but she says her jazz interest predated that meeting by decades. “If there was a time I didn’t love jazz, I can’t remember it.” Her first instrument was trumpet. “Then I played French horn and mellophone, too. I wanted to be a female Miles Davis. I even had Miles Davis stationery.”

But she wasn’t that good a trumpet player. “I was a better singer,” she says. “So I started singing jazz in high school. My high-school librarian, Phil Coventry, made jazz mixtapes for me. That’s how I learned standards from the American Songbook.”

She’s continually growing, learning, digging up or shaking free some bit of lore that informs her performances. “Right now, I am inspired by women composers from Knoxville like Leola Manning and Ida Cox,” she says. “Their music is from the 1920s and ’30s, but it’s new to me. And I am constantly thinking about how I can give the songs new life.”

Like she has so many times before, she experimented with a link to her go-to instrument. “Because I can play their bluesy songs on my ukulele, I feel like the music is in my hands. It’s in me, too!”

Jolly takes the whole process—the sharing, the publicizing—very seriously. “This festival is a wake-up call,” she says. “I can see it leading to more women-led music organizations. And more people looking for women musicians in roles other than singer. We can’t continue to leave the women behind.”

This project, and so many like it, are not just what she does—they are what she must do.

“I’m part of a legacy,” she says. “My responsibility is to reflect the times of my life in my music while honoring those who paved the way for me.”

The Women in Jazz Jam Festival will be held around Knoxville Friday, March 18-Sunday, March 20. Venues include WDVX, Knoxville Museum of Art, Scruffy City Hall, and the Red Piano Lounge. Some events are free; tickets for the main events range from $10-$20.