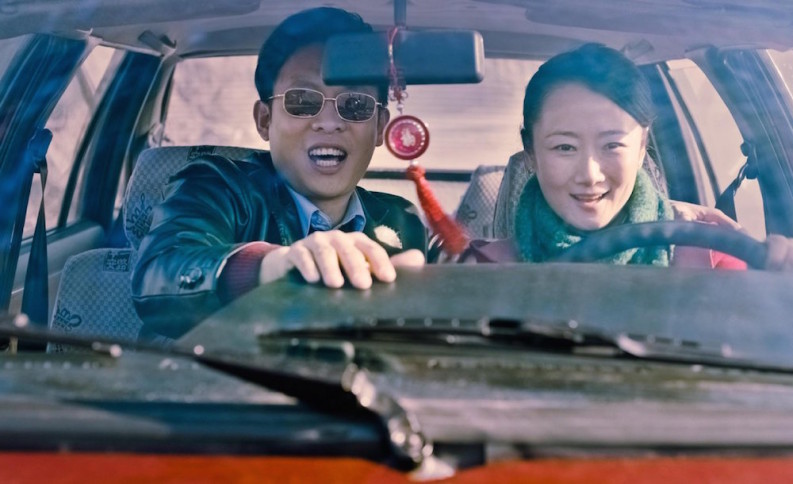 It’s one of the oldest stories in the world: a young woman finds herself torn between two suitors—a poor but decent chap and a wealthy blowhard. This particular triangle, however, plays itself out in contemporary China, during the most tumultuous era of change in the country’s long history, and that allows writer/director Jia Zhangke to make his ambitious new film a very modern tale, indeed. But the telling contrast in Mountains May Depart lies less in the timeless versus the current moment than in gimlet-eyed takes on 21st-century Chinese travails versus two hours of soapy family melodrama.

Jia’s careful critique of China’s post-Mao boom, which defined previous efforts such as Platform, Still Life, and A Touch of Sin, continues here. You can’t miss it, in fact. The film opens in 1999 with Tao (Zhao Tao) leading a community dance to a foreign pop tune—the Pet Shop Boys’ chipper disco hit “Go West.” Zhang (Zhang Yi) embodies the striving nature of the lyrics, and of much of China at the time, amassing businesses and cash and buying a car that he barely knows how to drive. His ambitions include making his platonic relationship with the lovely, guileless Tao into something more. But she seems content to hang out with stalwart Liangzi (Liang Jing Dong), whose affection for Tao is as obvious as his limited prospects.

Jia finds room for many wonderful character beats throughout, but especially with Zhang early on. He is such a blatant climber and bully that he should be utterly odious, but he’s so befuddled by his nouveau riche life. He earns a laugh, and some sympathy, when he not only pulls out his new cellphone to show off with a loud and pointless phone call, he pulls up the antenna, as if that ever did a thing. But Zhang gets what he wants—including a male heir, whom he names “Dollar.”

At which point Jia jumps to 2014. Tao leads a comfortable existence as an eminence in their provincial hometown, but she has lost everything else. Zhang has divorced her and moved to booming Shanghai with Dollar. Liangzi comes back into her life, but in a way that is sad for them both. In a moment of loss, she is reunited with Dollar, but he lives thousands of miles from his mother in more ways than one. It is the most subtle, and perhaps most successful, section of the film.

The strengths of Mountains May Depart include the various ways through which Jia measures time. The puppy in one reel becomes the doddering old dog in another, just as the infant Dollar becomes the mercurial teen of the final section. But these characters proceed around the same bend in the road time and again, brood and pop off on the banks of the same river, and live their lives under a towering historic pagoda that Jia fits into a shot every now and then. The contrast between what changes, and what doesn’t—a mother’s love, youthful confusion—animates the best of what Jia captures here.

But by the final section of the story, set in Australia in 2025, Mountains May Depart has started to crumble under the combined stresses of its epic story, vaulting ambition, and directorial idiosyncrasies. Jia loves a telling symbol, and while some hit their mark (two women sharing a small, sad moment beneath a huge stone lion statue, a stand-in for China’s plus-size ambitions), others are puzzling (Tao witnessing a fiery plane crash on a lonely road). He muddles his tale of generational alienation and loss with an Oedipal May/December romance between Dollar (Dong Zijian) and his teacher (Sylvia Chang). It doesn’t help that neither Dong nor Chang are very good in their roles, and Zhang has to overcome maladroit cosmetic aging to make any impression as an aging tycoon-in-exile. There is much to admire about Mountains May Depart, but even with the plaintive soundtrack interludes plucking at every heartstring in reach, it’s tough to love.

The Public Cinema series screens Mountains May Depart at Knoxville Museum of Art on Sunday, March 20, at 2 p.m. Admission is free.