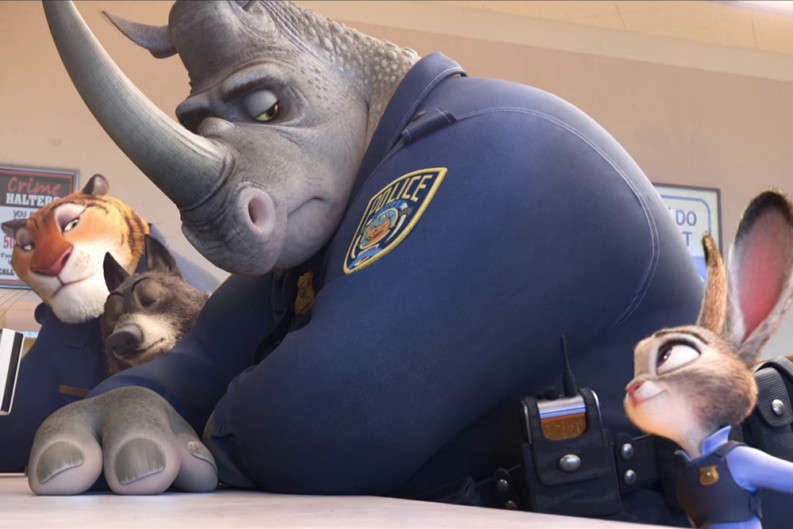 I’ve always been a little bothered by the predator/prey relationships in The Lion King. Yes, I know—it’s a cartoon movie about singing animals and I’m probably over-thinking it, but isn’t it a little creepy that the less murder-y animals are forced to celebrate the birth of someone who’s probably going to eat at least one of their kids someday?

Apparently I’m not the only one, because now Disney has given us an entire movie dedicated to exploring and subverting those very dynamics—and it’s absolutely terrific.

In the witty, engaging, and entertaining Zootopia, mammals have built a society that seems embarrassed and more than a little horrified by the Circle of Life. They’ve apparently done it very quickly—elders still remember the bad old days of eat-or-be-eaten, but younger critters enjoy a world that has ditched such primitive notions about species.

But has it really? Zootopians might have evolved beyond the predator/prey distinctions that saddled their ancestors, but their attitudes about inclusion and conformity could still use some work. Hence the obstacles faced by one Judy Hopps (voice of Once Upon a Time’s Ginnifer Goodwin), an idealistic country rabbit who dreams of becoming Zootopia’s first bunny cop. Judy’s parents try their best to dissuade her from such a trailblazing pursuit—they’d rather see her stick with the relative safety and complacency of farm life, along with her two-hundred-and-something siblings.

But you don’t get to be a Disney heroine by peddling carrots at a roadside produce stand, so as soon as Judy comes of age, she’s off to the Zootopia Police Academy. She graduates at the top of her class, only to face yet another seemingly insurmountable obstacle: Her hulking new boss, a cape buffalo named Captain Bogo (Idris Elba), doesn’t think bunnies are meant to be cops and assigns Judy to parking-ticket duty while her colleagues investigate a string of disappearances. Undeterred, she forms an uneasy alliance with a wily fox named Nick Wilde (Jason Bateman), and Zootopia goes a little Chinatown as the unlikely duo scours the underbelly of the city in search of a missing otter, uncovering a twisty conspiracy in the process.

The contortions of Zootopia’s plot are only the tip of the proverbial iceberg. As it zips along from one beautifully animated set piece to the next, the movie plays with a series of nimble shifts in scale, visual style, and structure that always keep it feeling fresh and surprising.

Part of the challenge for Judy—and an endless opportunity for the filmmakers—is that the little rabbit rarely fits into her surroundings. There’s a wondrous foot chase that sees her pursuing a thief through neighborhoods that shift dramatically and abruptly in scale—one minute she’s bolting down a rabbit-sized street, and the next she’s stomping through a miniaturized rodent district, wreaking as much havoc as she’s trying to stop.

Much has already been written about Zootopia’s message of inclusion and empowerment, and it couldn’t have come at a better time. Though it’s been in development for years, the film is a fortuitously timed takedown of the racist and xenophobic rhetoric that’s so prevalent right now. What elevates Zootopia above the ranks of similarly well-meaning stories, though, is the way even its most progressive characters are eventually forced to confront deep-seated prejudices. Judy scoffs at her father’s warnings about foxes, but she still carries a can of fox repellent on her duty belt, and the slightest move from Nick sends her reaching for it. The two also have different relationships with the stereotypes thrust upon them. Judy is constantly working to prove she’s not “just some dumb bunny,” while Nick embraces the “sly fox” shtick everyone expects of him.

If it sounds heavy-handed, Zootopia is anything but. Social subtext aside, it’s a fast-paced and gorgeously realized action-comedy that works remarkably well as both a police procedural and a buddy movie. The voice performances are uniformly excellent, with Goodwin and Bateman working up a level of chemistry that’s all too rare when actors are on screen, let alone confined to a sound booth. It’s also very funny—a show-stopping visit to a DMV staffed by sloths deserves to go down as one of the decade’s great comedy routines.

Kids’ movies rarely get better than Zootopia. Luckily for parents, neither do movies aimed at adults.