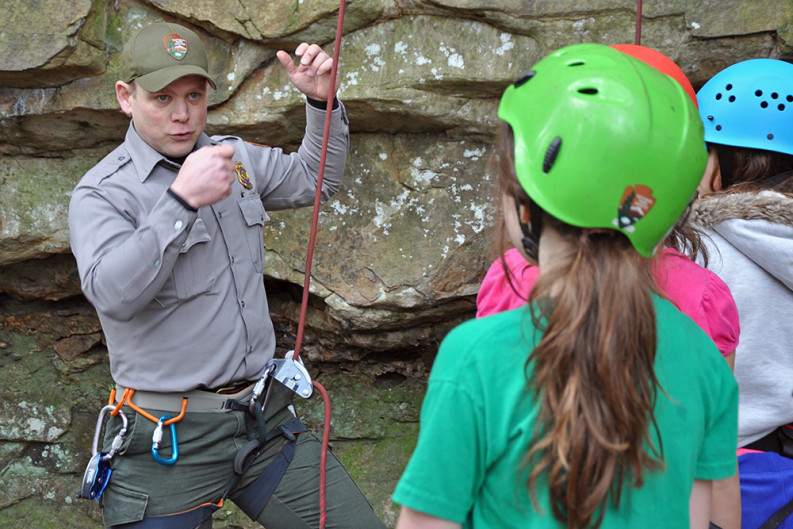 How does one go about learning a sport like rock climbing? As in other outdoor sports in which failure carries high-stakes consequences—hang gliding and base jumping, for example—rock climbing for beginners seems intimidating because of perceived and actual risks.

But if you’ve seen photos of people clinging to an expanse of sun-bleached sandstone and like the notion of the adventure, the challenge, the fitness, and yes, the view, there is a safe and fun way to become acquainted with the sport. It’s called “Climb with the Ranger” at the National Park Service’s Obed Wild and Scenic River on the first Saturday of each month, starting at 11 a.m.

Most of us have climbed at some point in our lives: up trees and boulders, over swing sets, monkey bars, and fences. A few decades ago I fell in with a hardcore group in New Mexico who took me rock climbing a couple of times. I remember the extreme physical and psychic exertion. I remember getting yelled at for stepping on a rope. One night, after a couple of beers, I accompanied one of them about halfway up a radio tower. As he ascended to the blinking red lights at the top, I wished him luck and descended with cold, benumbed hands. 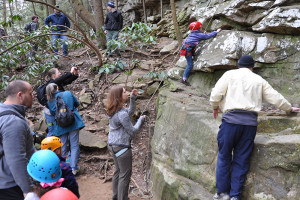 I was thinking that there would be 10 or so people at the March Climb with the Ranger and I could make up for the radio tower failure. At 10 o’clock, a time designated for “Coffee with the Ranger” at Lilly Bridge, rangers Noel Mays and Thomas Hall were laying out gear in the parking lot: ropes and carabiners and harnesses and shoes and helmets—a complicated tangle of gear that made kayaking seem simple by comparison.

But they were relaxed and friendly, even as they sorted with some urgency, as if expecting a crowd.

Mays, who is deputy chief ranger at Big South Fork, told me whitewater paddling is his sport of choice, but he also loves climbing because, like paddling, it offers an adrenaline rush and complex strategic challenges.

Climb with the Ranger, which has been offered for three years, allows people of all ages to try out the sport in a safe setup among experts, he said. Everything you need is provided. It’s free and all you have to do is show up.

After a while, volunteers began to arrive—climbers who help out each month because they want to introduce people to a sport they love. Everybody was in a good mood and anxious to gather gear and get to the routes. Still, there were only a few people, and the sun had burned through the fog, making it a decent late winter day.

At about 10:30, I hiked up to the wall, about a tenth of a mile, to watch one ranger and a couple of volunteers set the leads on the routes. The kids would climb from 11 to around noon, Mays told me, and then the adult kids could play until about 3.

As I approached the bluff from the trail for the first time, I thought, well, that’s a good-sized piece of rock, and as I got closer and could see better through the hemlocks, I realized I was only seeing the lower half of it. It imposed itself. It blocked the sky. And I felt small and a little dizzy.

Kelly Brown, author of The Obed: A Climber’s Guide to the Wild and Scenic, captures the allure of this climbing mecca that contains over 400 sport routes (about 50 at Lilly Bluff alone): “If steep is what you like, the Obed has it; routes that overhang with superb quality rock featuring holds so honkin’ big that you can’t believe your hands are opening up.” 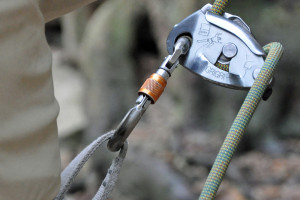 Ranger Rick Ryan and the two volunteers scaled three different routes and looped ropes through the bolts at the top. A ranger or volunteer, also wearing a harness, would secure one end of the rope with a belaying device (Grigri), while the other end would be knotted to the climber’s harness. If you fell off the rock, as most would, at some point, the ranger would “brake” with the Grigri and catch you. When climbers were ready, belayers would ease them down by releasing rope.

Tribes of kids, from age 7 or so on up, began to trot and skip up the trail. They did not seem at all intimidated by the giant crag emerging from the forest. Back at the parking lot there were more kids, all of them getting geared up in harnesses, helmets, and climbing shoes. Many of them were repeat participants that the rangers greeted by name.

Hall gave a short safety talk, starting with this: “The most dangerous thing you’ve done is the drive here. The second most dangerous is the hike up here. Climbing is the third.”

At around 11, all the routes were occupied, not just the two kids’ climbs about 25 feet up to a little cave, but also up Lounge Lizard and Rocking Chair, what volunteer Dr. Bill Campbell told me were moderate climbs (5.11 and 5.9 on the Yosemite rating scale). I craned my neck and squinted at the top bolt of Lounge Lizard, 80 feet above and over me, an overhang at the pinnacle of the route. “Moderate” was not my first thought.

Most of the routes were straight up, of course, and the kids used the knobs and cracks and ledges to clamber up them as the belaying rangers shouted encouragement and advice from down below. Parents aimed cell phones at their rock-climbing kids and cheered as if at a basketball game (except nobody kept score). 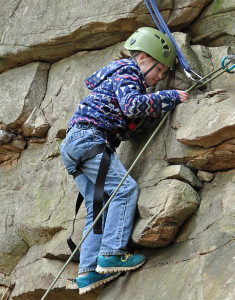 By 1 p.m., people were still arriving; kids stood in line for a repeat climb. Mays estimated 100 to 125 climbers showed up that day. He said he’d seen more there. When I left, the adult climbers had begun to take over and they were waiting in lines for each route, including Tarantella (5.10a) whose “crux,” near the beginning of the route, was reducing some experienced climbers to emotional rubble. One slender woman was cursing laughingly in French as she tried again and again to get past the first overhang: “Merde!”

I figured I’d come back in April, hoping for a slimmer turnout, but seeing the joyousness of the climbers and spectators, I doubted that would be the case. Climb with a Ranger won the National Park Service’s Keeper of the Light Award for Interpretive Support in 2015.

There are climbing walls at River Sports Outfitters (2918 Sutherland Ave.) and at the University of Tennessee (Vol Wall), but as Mays said, “This is more real, and you get a better feel for the rock.”

It also looked like a lot more fun. In Kelly Brown’s book, Ranger Rob Turan exhorts us to “Take a kid climbing. Better yet, take several….Give the kids a sense of athletic self-worth they probably have not experienced.”

How to get there: Take Highway 62 West out of Oak Ridge and stay on it through Oliver Springs and Wartburg. A few miles outside of Wartburg, 62 will split left from 27. Take that left through the small community of Lancing and after a few miles look for Ridge Road on your left. On Ridge Road go 3.2 miles and you will descend into the gorge to Lilly Bridge and Clear Creek. There is parking on both sides of the bridge.