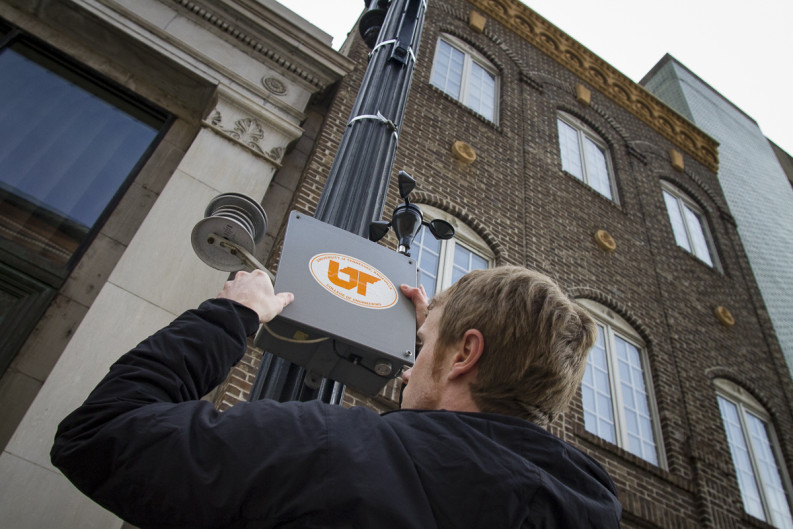 Drew Howe pulls a scruffy green stepladder from the back of his Nissan Xterra parked along Gay Street, props it against a KUB utility pole across the street, and climbs up toward a small gray box stapled overhead. For a year and a half now this has been part of his monthly routine, attending to these obscure plastic boxes scattered around town. The only things that hint at the contents inside, or its purpose, is a small anemometer (a device used to measure wind speed) sticking out the top and an orange and white University of Tennessee sticker pasted on its cover. Drill in hand, Howe unscrews the plastic face exposing a tangle of wires inside, a small battery pack, and a dangling cord he plugs into a small Dell laptop to download the latest data.

“Are y’all installing a new camera?” a lady asks passing by, assuming any unmarked box posted downtown must be for security or surveillance. This box is recording, but it’s not logging the lives of us ordinary citizens. It’s one of 10 weather stations strategically placed by UT researchers in urban neighborhoods around Knoxville, attended to by a small army of students, like Howe. They’re all part of an ambitious and expanding experiment aimed at better understanding how variations in weather from neighborhood to neighborhood—on a hyperlocal scale—tie in with other factors like asphalt cover, development, tree canopy, and green space to impact local residents and their quality of life.

Since July 2014 these small weather boxes have been collecting information from six urban neighborhoods. There is one on Gay Street downtown, another at Ijams, and two boxes at different locations in Lonsdale, Burlington, West Hills, and Vestal. They’re recording things like temperature, humidity, air quality, and wind information, which researchers from various backgrounds—geography, sociology, and engineering—will analyze and couple with feedback gathered from residents during in depth interviews and focus groups. 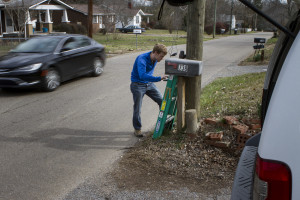 The modest data sampling and qualitative input from locals is already helping paint a picture of issues facing some communities, though UT professors are hopeful that future funding will allow the project to expand this year to include up to 100 sensors, collecting more and varied data, connected to an app for easy and near-instantaneous access to hyperlocal weather data about neighborhoods around town. But it could be up to six months before they learn if grant applications that would allow such an expansion are approved or denied.

“Some of the things we’re looking at now are extreme heat and heat exposure, and also air quality in Knoxville, which is known for having pretty bad air quality,” explains Kelsey Ellis, a UT geography professor heading up the project along with two other professors, Jon Hathaway, in engineering, and Lisa Reyes Mason, focused on social work. “We think it’s beneficial for people to understand air quality on a neighborhood level instead of what’s just coming out of the Knoxville Airport,” where more general, city-wide weather data is recorded.

Preliminary findings, for the most part, have showed what they expected: neighborhoods with less tree coverage get hotter than other parts of town, and many low-income neighborhood lag in canopy coverage when compared to their more affluent peers. But it also revealed that while trees help keep neighborhoods cooler during the daytime hours, they didn’t cool the same neighborhoods at night as expected because many blacktop surfaces absorbed and retained heat. And some tree-heavy neighborhoods actually boasted a higher heat index than others on really hot days due to the moisture captured in soil and grasses there.

The biggest variations in recorded temperatures between neighborhoods were about 1.5 degrees Celsius (roughly 2.7 degrees Fahrenheit) within a three-month period, though students and researchers are still working to make sense of all the data. That may not seem like much, but given that all weather stations are within a 7-mile radius, and this particular sample spans only 90 days, it’s a pretty significant range, Ellis says.

“During the hottest parts of the year, and during heat waves over the summer especially, that’s probably when you’re going to see the biggest impacts,” she explains. “People who live in neighborhoods like West Hills [which is more affluent and has ample tree coverage] will be able to cope with things pretty easily. They have a lot of trees and air conditioning. People in poorer communities have less tree cover and they’re hotter, and those residents may not have the resources they need to cope with that.”

So far, the impact of this research have been mostly academic, but the idea is that this type of information and data analysis could eventually help better inform local city officials, arborists, and planners as they look to invest limited resources in things like parks and urban tree plantings. Ultimately, it could help bolster health, livability, and the attractiveness of various communities in town.

“If you have a set budget and want to add some green space, what’s the best way to do that? Should we do a big park or smaller neighborhood-level stuff, like tree plantings or something?” asks Howe, a graduate student whose thesis focuses on the differences observed between the neighborhoods, but also how those differences correlate with land coverage—both in terms of “impervious surfaces” like parking lots and buildings, and also tree canopy and green space. Soon, this type of neighborhood-level weather data and modeling could help better inform those decisions.

The city of Knoxville already has an idea of which neighborhoods are the greenest and which could use more trees, though Knoxville Urban Forester Kasey Krouse says neighborhood-level data on things like air quality could help fine-tune its approach.

“We know where the majority of our tree coverage is throughout the city, but if there are areas where the sensors show low air quality, and that matches up with areas that have low tree coverage, that would be a no-brainer for us,” Krouse says. “There’s a lot of correlation between public health and the benefits trees provide. The major benefits we get from trees include CO2 intake, reductions in heating and cooling costs, increased property values, and reductions in stormwater runoff. And all of those benefits are correlated to being able to maintain larger canopy trees.”

Knoxville overall averages about 40 percent tree cover—not bad, says Krouse—but some neighborhoods lag behind others, and maintaining such a vast network of leafy branches overhead wouldn’t be realistic in some urban neighborhoods and downtown, he says. Some studies suggest 15 percent coverage downtown is realistic, with 25-30 percent in the most urbanized neighborhoods and 50 percent in suburban areas.

The city has an annual tree-planting budget of about $70,000, made up of a mix of state and local dollars. It uses those limited resources to plant in neighborhoods below the 40 percent threshold, recently putting down roots in Parkridge and along some streets in Oakwood-Lincoln Park.

Knoxville’s most barren districts include most all of downtown, Fort Sanders, the Old City, Old North Knoxville, Fourth and Gill, and Town Center, all which have less than 20 percent tree coverage, according to data from the city. The Cherokee Farm and Woodlawn areas in South Knoxville, and portions of Fountain City to the north, have the most tree cover, upward of 60 percent, the same data shows. 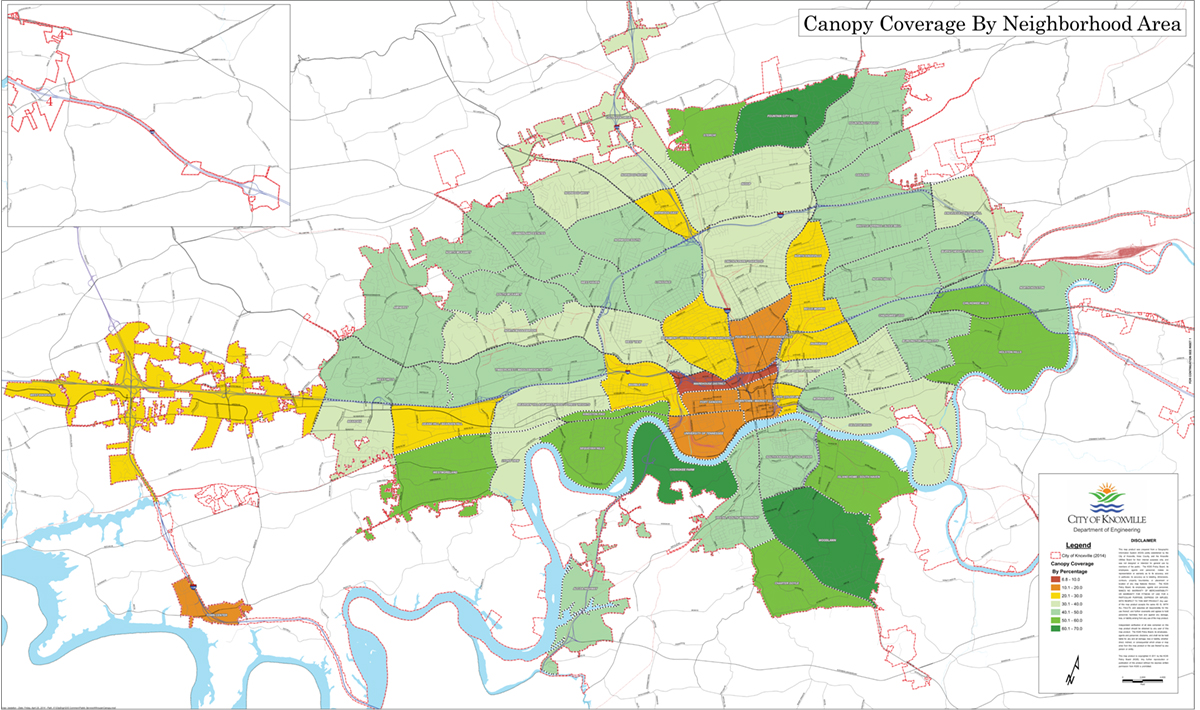