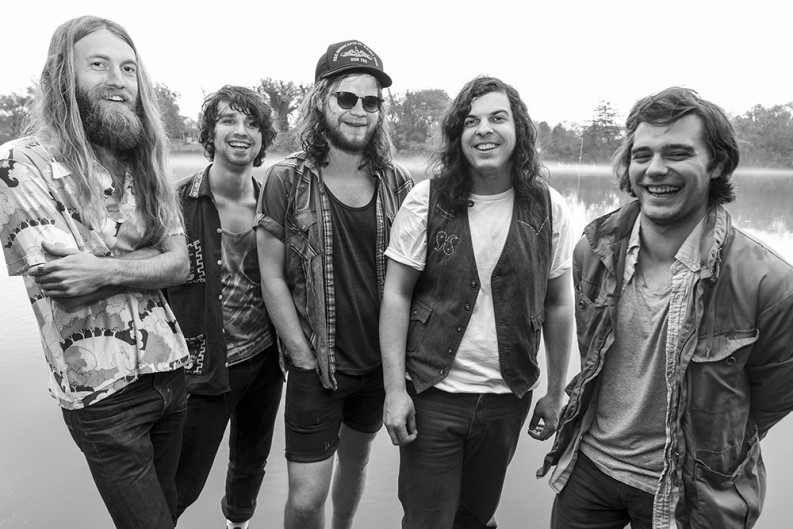 Nashville indie rockers Blank Range played their first major gigs in May 2014 at an Iowa casino, opening three shows for Alice in Chains. Yes, the grunge-rock veterans responsible for “Man in the Box,” “Rooster,” “Down in a Hole,” and other brooding ’90s anthems.

“I didn’t know what to expect going into it,” says Blank Range singer/guitarist Grant Gustafson. “It was insane. It was hilarious. We showed up the first day and played at a casino with them, and everybody in their crew was like, ‘Wait, what are you doing here?’ We showed up in a tiny van, and they had semis and buses.

“That speaks to the idea that you never know how you’re going to be interpreted. I may think that your music suggests a certain thing or sounds a certain way, but at the end of the day, those people just love rock ’n’ roll! It was a really fun and kind of absurd experience.”

Blank Range has emerged from an insanely crowded Music City rock circuit because of that all-in attitude. The five Midwest transplants arrived in Nashville in spurts over the past six years, at first performing as a malleable collective for each others’ respective songs.

“Everybody started making bands, and we ended up with three bands with a main songwriter,” Gustafson says. “For some reason, that was the deal in that era of Nashville. There was a group of people, and everybody played in everybody else’s band. We eventually realized that we were spreading ourselves too thin, so we decided to expedite that and make it a little simpler.”

This hive-mind mentality is reflected in their music, an eclectic patchwork that recalls Wilco’s folky noise, Alabama Shakes’ groove-heavy soul, and the giddy classic-rock thrust of early Kings of Leon. With Gustafson and guitarist Jonathon Childers as co-frontmen and chief songwriters, keyboardist Jonathan Rainville, and a nimble rhythm section featuring bassist Taylor Zachry and drummer Matt Novotny, they merge elements of each member’s tastes and experience, pushing tracks into unexpected territory.

Their debut EP, 2013’s Phase II, was recorded during their hunker-down early era, during which they frequented Nashville venues like the Basement. They earned valuable exposure, impressing local audiences with songs like the soulful “Roommate’s Girlfriend” and the churning “Ziggy Coyote.” They also took a crucial step by winning a local competition for a spot at Bonnaroo in 2014. They’ve subsequently opened shows for Spoon, the Drive-By Truckers, and the Mountain Goats. (The latter took place in October at the Bijou Theatre. “I love those old theaters,” Gustafson says. “It sounded great in there. The architecture was impressive.”) For the past two years, the quintet has focused on steadily elevating their profile.

“The only reason we’ve been able to generate any sort of buzz is just by touring a lot,” Gustafson says. “We’ve been working a lot on our live show. But it’s been wild when you show up and just do your thing authentically—people get into that, no matter what the crowd, whether it’s the Mountain Goats or four people at a bar somewhere.”

The band’s next step is releasing its debut full-length album, which Gustafson and company recorded at Nashville’s Creative Workshop with a legitimate recording team and higher fidelity equipment—a natural improvement on the raw production of Phase II. “We recorded that in our basement, just by ourselves with GarageBand,” Gustafson says. “When you use a real engineer and producer, things tend to sound a lot better.”

On the new album, Blank Range, as usual, refrains from consciously mining certain influences. But Gustafson promises some musical left turns. In particular, he emphasizes the importance of vocal harmony, which they’ve sharpened by playing new material on the road. “We got really into the Flying Burrito Brothers, the Byrds’ Sweetheart of the Rodeo, incorporating that sound into a more rock ’n’ roll setting,” he says. He’s also tapped into that reflective, country-rock atmosphere by playing more acoustic guitar and steel guitar.

Gustafson’s excited for the band’s future, which includes newly announced opening slots for indie-folk act the Cave Singers, along with a June gig at the Governors Ball NYC Music Festival in New York. (“We’re opening for Kanye,” they joked on Facebook.) Whatever path leads to that next career leap—even if it involves more shows with metal bands—Blank Range is ready to follow it.

“I feel like we’re growing, trying to expand upon what we started with,” Gustafson says.