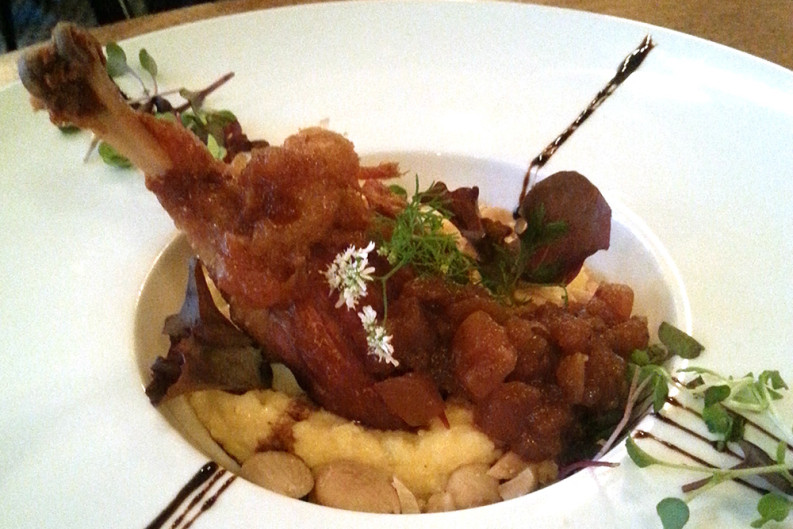 Theoretically, I was in love with the Oliver Royale long before walking through its doors. Unmitigated praise flowed from the lips of so many well-traveled and well-fed friends and acquaintances that it seemed impossible for me not to adore the place. In addition, the handful of photographs posted online revealed food that is also a treat for the eyes. And the menu—a creative one that promises to change with the seasons—recalls a fashionable metropolitan spot of the sort that many of us ache to have in Knoxville.

It certainly looks the part, even if I wasn’t entirely won over. Brooklyn’s hOmE Studios authored the design; they specialize in hospitality interiors and are well regarded internationally, with press clippings to prove it. To be sure, the Royale appeals to the eye with a handsome and angular bar, long black banquettes that almost circle the room, and white globular lighting that insinuates the feel of an Art Deco Metro station. It’s also a little cramped on a full night and sound waves seem to bounce around in that room; it’s awfully noisy and hard to converse once the crowds descend.

And descend they do. Except for my late-afternoon visits, the Royale has been happily full—as is the wont of most new eateries in Knoxville. Generally, a reservation is in order for dinner service on a weekend night, though owing to the restaurant’s extended serving hours there’s plenty of time to slip in without having to face the cacophony of peak times. The lunch menu is served until 5 p.m. and it’s supplemented by additional brunch offerings on Saturday and Sunday. After 10 p.m. there’s a late-night menu of hearty snacks like bison tartar, a burger, and smoked trout crostini.

It is true that the food here is very good-looking and impresses the palate in unexpected ways, and the menu is an attractive read for people who love to eat. But I wouldn’t say that I’m in love with the Royale. I’m still awfully fond of it and expect to return again because I like many, many things that the place offers.

I have a weakness for composed salads, and the Royale’s beet offering, literally worthy of a royal table, won my heart with a stunning presentation that radiates color. It’s equally delicious; the happy pairing of fleshy beets and creamy goat cheese is nicely accented by bright crisps of thinly sliced root vegetables and the light chew and lovely flavor of pickled mustard seeds. Beets, while not utterly old hat, have been done deliciously around town for years, but the lone parsnip on my plate was a novel addition and pure epiphany. The kitchen had managed to coax every nuance of sweet, earthy, slightly nutty perfection from this too often neglected root.

And the restaurant’s duck confit starter may be the new dish to beat in town with its fine ensemble of very well executed elements, including an inspired presentation of soft grits combined with the hearty crunch of Marcona almonds. It’s a textural and flavorful coup de foudre that made for an unequaled marriage with the splendid confit of duck leg, a delectable and salty tidbit with perfectly crispy skin and silky, buttery-textured flesh. But there lies the rub. Confit by any objective standard is a salty dish, but the Royale managed to take this particular confit to an uncomfortable level of saltiness. And this flaw was constant in each one of my four visits.

Of course, restaurant food is notoriously rich in sodium—often in ways that unsuspecting diners won’t notice. But here, I was overwhelmed.

A dish that included the most perfectly cooked filet of salmon that I’d yet encountered in Knoxville (or anywhere, really) became nearly inedible midway through. And what a shame that was. The salmon sat in a bowl, as many of the Oliver Royale’s entrees do, enthroned just above a majestic medley of fennel, tomatoes, shiitake mushrooms, and peas swimming in a potentially thrilling lemongrass broth that was too salty to enjoy.

Mushrooms make regular and artful appearances throughout much of this menu. A mushroom salad was chock full of the most well-cooked mushrooms I’ve eaten in these many years, but they, too, were extremely salty.

The Royale’s very well accomplished short rib also arrived over-seasoned—though, in this case, not ruinously. The long, slow cooking yields a perfect, melt-in-your-mouth moment of beefy concentration. The dish gets a spritz of truffle oil that gives aromatic pleasure and a lingering flavor, neither of which are overdone. Whipped potatoes and oyster mushrooms round out the dish with comfort, while crispy kale chips bring a delightful textural variation to the dish’s softness but didn’t make much of an impression as a flavor element.

The heavy-handed approach to salt almost ruined even the one food that’s most amenable to sodium: fries. Still, these are tasty shoestring-style frites that, admittedly, I ate by unglamorous handfuls. They arrived in a pile alongside the muffaletta, which the Royale’s kitchen presses like a panini. But Knoxville’s standards for quality sandwich making are pretty high, and this muffaletta—although perfectly okay—isn’t the best use of your sandwich money.

The service here, like it is across much of Knoxville’s restaurant and catering landscape, is friendly, earnest, and somewhat unimpressive. The staff is really very nice, but what I thought were simple questions about the food sent them in search of answers—and to their credit they handled these moments gracefully. But with a menu that’s written in fashionable ambiguity (i.e., “Salmon: tomato, fennel, shiitakes, peas, lemongrass broth”), it’s hardly unreasonable to expect the staff to have ready answers.

The fact of the matter is that the Oliver Royale promises to be an amazing experience—and it is, in many ways. Its inventive, bold, fresh food ideas are a welcome addition to our small but growing collection of excellent restaurants. But at this level of execution and expectation, details matter more.

It’s high time that Knoxville had more restaurants like what the Oliver Royale might be. While I’m nearly always in favor of cheering for the home team as long as they’re trying, it could be that if we demand more from those who obviously can give more, perhaps we’d really get what we want instead of settling for something that’s pretty good. For Knoxville.