Here's the Lineup for Our Knoxtacular Variety Show - The Knoxville Mercury 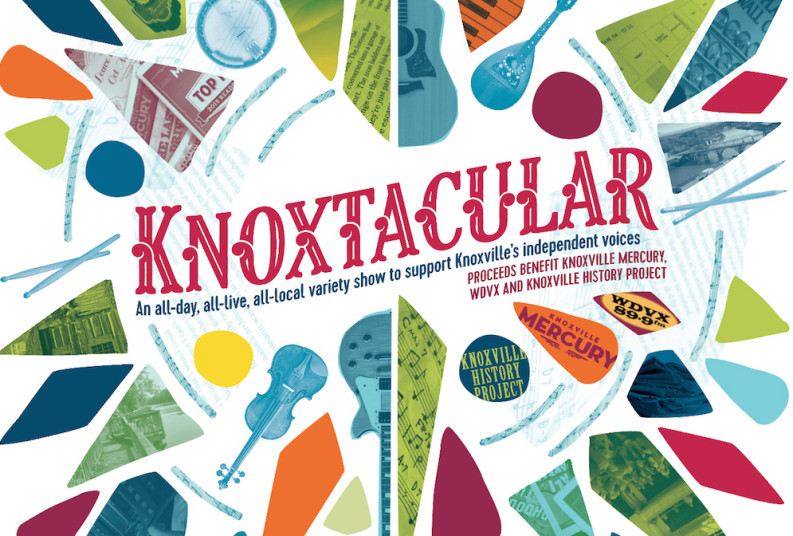 Knoxtacular is almost here! Join us on Saturday, March 5, at the Bijou Theatre for an all-day, all-live, all-local jamboree in support of the Knoxville Mercury, WDVX, and the Knoxville History Project.

Admission is free, but we are requesting $10 (or more!) donations to help keep Knoxville’s independent voices strong. If you can’t make it to the theater, listen to the show live on WDVX 89.9 FM or at wdvx.com.

And: Come to the show at the Bijou to register for great prizes. including tickets to Big Ears, Rhythm N’ Blooms, Clarence Brown Theatre’s South Pacific, KMA’s Alive After 5, plus gift certificates from Bliss, Raven Records & Rarities, and Stanley’s Greenhouse. No purchase necessary.

Invite all your friends!

1 p.m. | Kelle Jolly
Kelle Jolly’s influence spreads across Knoxville’s many music scenes. She’s the host of Jazz Jam on WUOT, leader of both the Ukesphere of Knoxville ensemble and the Kelle Jolly and Will Boyd Project, and founder of the forthcoming Women in Jazz Jam Festival.

1:25 p.m. | Marilyn Kallet
Marilyn Kallet was born in Montgomery, Ala., and grew up in New York; this tension between North and South is one of the themes in her poetry. In addition to being a University of Tennessee professor and powerful force of good for poets and poetry in Knoxville, Kallet has published 16 books, including six volumes of poetry, translations, critical essays, children’s books, pedagogy, and anthologies of women’s literature.

1:40 p.m. | Eli Fox
16-year-old multi-instrumentalist and singer/songwriter Eli Fox is already a Knoxville veteran—he was a member of the teen folk-bluegrass band Subtle Clutch and currently plays in the Knoxville Banjo Orchestra. His soon-to-be-released solo album, Nothing to Say …, will show off his contemporary take on traditional roots music.

2 p.m. | Robinella
Robin Ella Bailey is undoubtedly one of East Tennessee’s most beloved performers. Her unique and evocative voice transforms every song—country, pop, jazz—into something that feels newly discovered. Local audiences first fell under her spell in the late ’90s, when Robinella and the CC Stringband (with then-husband Cruz Contreras) performed an exhilarating mix of bluegrass, country, and rock. In the years since, she has teamed up with jazz trios, dobro master Rob Ickes, and other collaborators with refreshing results.

2:45 p.m. | Aaron Tracy
Country singer/songwriter Aaron Tracy started his music career at the age of 8 in Louisville, Tenn. His mother helped him learn to play guitar and strengthen his vocals. The graduate of Alcoa High School and current Maryville College student has opened shows for Sara Evans and John Michael Montgomery. His first single, “Chillbilly,” is available on iTunes.

3 p.m. | The Chillbillies
The Chillbillies have long been one of Knoxville’s favorite party bands—a group of accomplished musicians who love playing so much they won’t quit their day jobs. Their repertoire is a good-time mix of country, bluegrass, Southern rock, and whatever tunes will please the crowd most.

3:20 p.m. | Liam Hysjulien
Liam Hysjulien’s writing has appeared in Salon, The New Republic, and The Brooklyn Quarterly. He has a new poem, “Blue Dye,” in the current issue of Ploughshares magazine. He is a contributor to WDVX’s Tennessee Shines Radio Show.

3:30 p.m. | Bradley Reeves
The Tennessee Archive of Moving Image and Sound (TAMIS), under director Bradley Reeves, is a regional archive dedicated to collecting, preserving, and providing access to the moving images and recorded sound heritage of our region. TAMIS, a department of the Knox County Public Library, is heavily involved in the forthcoming Knoxville Stomp festival.

4 p.m. | Dixieghost
Americana band Dixieghost blends old-time, country, and bluegrass into a sound that is deeply rooted in tradition yet is unmistakably original and progressive. Songwriters Jason Hanna and Justin Nix have a rare musical chemistry that can only come from years of writing and singing and playing shows together. Their 2015 release, Wine and Spirits, is a rip-roaring Appalachian adventure.

4:50 p.m. | Dawn Coppock
Adoption attorney and environmental activist Dawn Coppock published her first book of poetry in late 2015. As Sweet as It’s Going to Get is a collection of haiku and longer poems about love, marriage, family, food, and being a woman in the South.

5:30 p.m. | Jonathan Sexton
Long known in the Knoxville music scene for his charismatic stage presence in the bands Oversoul, the Redhouse Project, Whiskey Scars, and his Big Love Choir, Jonathan Sexton made a major step into the business side of music four years ago when he co-founded Artist Growth LLC with fellow musician and one-time Knoxvillian Matt Urmy. Sexton is CEO and co-founder of Bandposters, and is currently Entrepreneur in Residence at the Knoxville Entrepreneur Center.

5:50 p.m. | Black Atticus
Black Atticus, aka Joseph Woods, is a hip-hop/spoken-word artist heavily influenced by great jazz vocalists and timeless storytellers. He credits his approach to blending stories with song and rhythm to his 1999 understudy work with Knoxville-based Carpetbag Theatre. A six-time nationally ranked slam poet, Atticus hosts workshops and the monthly Po’ Boys and Poets event at Big Fatty’s.

6 p.m. | Erick Baker
Singer-songwriter Erick Baker began his music career as a casual, part-time player, picking out cover songs for inattentive audiences. That all changed when he got the opportunity to open for Grammy Award-winner John Legend at the historic Tennessee Theatre. Baker’s full attention turned to music, resulting in his debut EP in 2008, followed by opening slots for the Goo Goo Dolls, Grace Potter, Brandi Carlile, Heart, and many more. His hometown shows at the Bijou Theatre sell out. Baker hosts the travel show Tennessee Uncharted, which airs statewide on PBS member stations.

6:15 p.m. | Matt Chadourne
Local comedian Matt Chadourne specializes in dry, almost (but not quite) absurdist comedy. He is the winner of the 2013 Rocky Top Comedy Festival and founder of the QED Comedy Laboratory, a weekly experimental comedy show at Pilot Light.

7 p.m. | The Jank
Surf-rock trio the Jank (David Peeples, J. Miller, and Chris Cook) inspire shimmying and grooving with their classic sound. Their repertoire includes the Ventures, Link Wray, Dick Dale, and the like.

7:30 p.m. | Hudson K
Electro-synth rock duo Hudson K (Christina Horn and Nate Barrett) stands out in a city so populated by string bands and jazz-school grads. They’ve earned rightful comparisons to Phantogram and Siouxsie and the Banshees, and their frenetic stage show, often accompanied by multimedia projections, earns the attention of audiences.

Special thanks to our sponsors: Yee-Haw Brewing Co., Knox Heritage, the Bijou Theatre, Tomato Head, Hard Knox Pizza, and the Bistro at the Bijou.