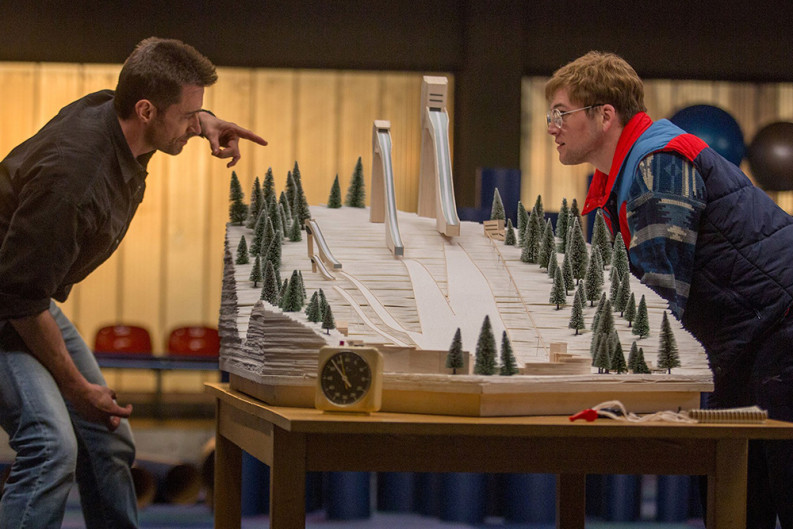 Ticking off clichés is nearly an Olympic event in Eddie the Eagle, the new sports comedy about the unexceptional but tenacious British ski jumper who, if we’re to believe the version of events presented in the movie, pretty much Forrest Gumped his way to the 1988 Winter Olympics in Calgary. It’s a film replete with training montages and inspirational monologues, its protagonist dogged by elitist insiders and tasked with drying out a washed-up mentor who’s headed for redemption whether he likes it or not.

But being overly familiar isn’t the same as being bad, and director Dexter Fletcher brings considerable warmth and plenty of winking humor to his by-the-numbers underdog tale. Don’t bother telling Fletcher that his film is a mash-up of Cool Runnings and The Karate Kid—he already knows, and he’s in on the joke. Eddie the Eagle isn’t as memorable as either of those movies, but it’s charming and entertaining, and it glides along on the strength of endearing performances from its leads.

It’s 1973 when we first meet Eddie (played as a boy by Tom Costello and Jack Costello), a relentlessly hopeful kid with poor eyesight, a cumbersome leg brace, and a dream of becoming an Olympian. He doesn’t care which sport—Eddie just wants to compete. The road ahead of him is a long one, though, because Eddie has little athletic ability, and his working-class parents (Jo Hartley and Keith Allen) can’t afford the expensive training most Olympic athletes enjoy from an early age.

Eventually, though, an adult Eddie (Taran Egerton) finds that he has an aptitude for downhill skiing. When he’s cut from the British Olympic squad before he has a chance to qualify for the Winter Games, Eddie tries another tack: He takes up ski jumping with the reasoning that, since there isn’t a British ski-jumping team, he won’t have any competition. After a bone-crunching fall at a German training camp, he realizes he needs a coach; cue Hugh Jackman’s swaggering entrance as Bronson Peary, a one-time Olympic great who now works as the camp’s groundskeeper. Eddie eventually enlists Bronson’s help in training for the ’88 Winter Olympics—the same games that also gave us the Jamaican bobsledding team that would inspire Cool Runnings, which often serves as something of a blueprint here.

It should all seem hackneyed and manipulative, and without the formidable talents of Egerton and Jackman, it might. Egerton’s performance as the awkward, farsighted Edwards is so stylized that the actor, best known for his starring role in Kingsman: The Secret Service, is nearly unrecognizable through all the tics and facial contortions. But the guy has screen presence to spare, and his chemistry with Jackman is hard to resist as the pair work through all the expected beats of the mentor/mentee relationship. Life advice? For sure. A falling-out? You bet!

It’s framed as a biopic but, much like its subject, Eddie struggles to qualify. In some ways, that’s kind of a bummer. The movie glosses over some of the more interesting aspects of Edwards’ story in the interest of getting to the next sports-movie beat, and it turns him into more of a doofus than his real-life counterpart, who’s actually a quite skilled downhill skier. If anything, Edwards’ real story was arguably even quirkier than the one onscreen—when he received word that he’d qualified for the Olympics, the real Edwards was paying £1 per night to sleep in a Finnish mental hospital because those were the only accommodations he could afford.

But there’s no glory in accurately depicting the lives of minor sports celebrities, is there? Eddie goes for a different kind of gold, and it mostly sticks the landing. From its kitschy production design to its throwback, synth-infused score and on-the-nose pop soundtrack—a training montage is set to Hall and Oates’s “You Make My Dreams Come True”—Eddie feels very much like a product of the era it depicts, and it even offers some visceral thrills in its cringe-inducing ski-jump sequences. If an inspirational, late-’80s sports comedy sounds appealing to you, it’s hard to imagine that you’ll come away from Eddie the Eagle with anything less than a sufficiently warmed heart.