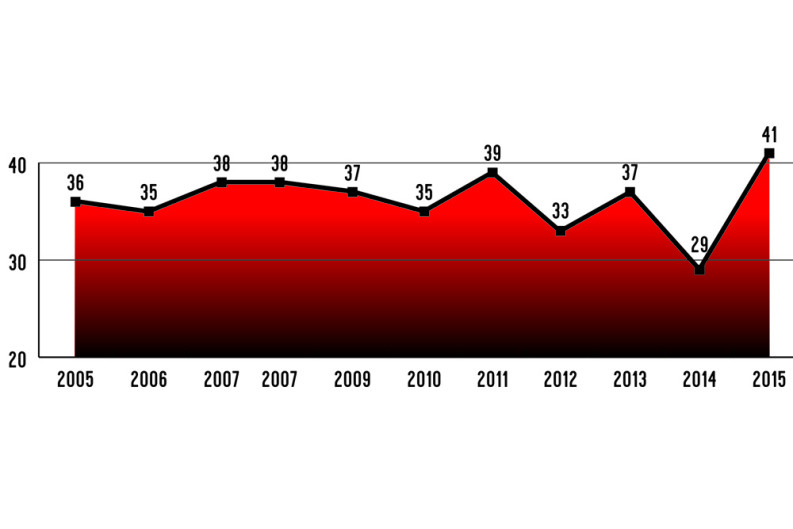 Hate is on the rise in Tennessee. If the number of hate groups active in the state is any indication, Tennessee may very well be one of the most hateful states in the nation.

According to the most recent count of hate-focused organizations throughout the United States, Tennessee ranked fourth as the state with the highest number of active hate groups in 2015. But when you compare the number of hate groups with state populations, Tennessee edges up a spot, to number three, as one of the most hateful states per capita. Only our neighbors to the west, Arkansas and Mississippi, boast more hateful affiliations compared with the number of people that live there.

The number of these hate groups operating in Tennessee increased more than one-third from 2014 to 2015, from 29 to 41, mirroring a national uptick, according to data compiled by the Southern Poverty Law Center. The Montgomery-based civil rights organization annually publishes state and national tallies of organizations focused on hate. Its list includes usual suspects like chapters of the Ku Klux Klan, neo-Nazi and neo-Confederate groups, and black separatist organizations like the Nation of Islam, but it also covers many outspoken religious groups that take strong stands against some groups, mostly related to LGBT issues.

“There’s some history with white supremacy in this part of the state, and you can tap into some of that background to explain the contemporary era, but I think the SPLC report really shows a national trend of growing extremism,” explains Joshua Inwood, a University of Tennessee geography professor whose research focuses on contemporary issues of race and society.

“Race and racialization processes are always complex, but I think there has been no question that with the election of the first African-American president, and with questions over his birth certificate and that he’s somehow secretly infiltrated the U.S. electorate as part of a large plot by radical groups, those discourses have become much more prevalent and the everyday rhetoric of white supremacy has been made more palatable to a wider base of people,” he says. “You only have to look at the campaign of Donald Trump to see that played out on a daily basis. It was just this weekend that Donald Trump refused to condemn David Duke or the Ku Klux Klan. But it’s really important to understand that this is not a new playbook [for politicians]. It’s been used over and over and over again, most recently by the Republican party but before that it was the Democratic party of Reconstruction in the early 20th century.”

The SPLC report, included as part of its quarterly Intelligence Report publication, features a prominent photo of Trump on its cover. Writing about factors possibly contributing to an upswing in hate groups, SPLC fellow Mark Potok pointed to Trump’s statements demonizing Latinos and Muslims, as well as support he’s received from some prominent white nationalist leaders such as Jared Taylor and former Klansman David Duke.

In Tennessee, the number of hate groups has fluctuated over the years, peaking in 2015 at 41, up from 14 in 1999. In East Tennessee, roughly from Chattanooga to the North Carolina state line, there are said to be 13 active hate groups, including a handful based in the Knoxville area. On the list are the Supreme White Alliance based in Oak Ridge; Traditional Workers Party, South Knox Ten Milers, and Ku Klos Knights of the Ku Klux Klan all based in Knoxville; and the American Eagle Party out of Gatlinburg.

Researchers at least in part attribute the resurgence in these types of groups to recent terrorist attacks around the country (including one in Chattanooga), campaigns against the Confederate flag following a mass shooting in Charleston, and emboldened anti-government sentiment follow the Cliven Bundy standoff (exacerbated recently by the militia takeover of a wildlife refuge in rural Oregon). Inwood also points to the “long and deep history” of the Ku Klux Klan in Tennessee, noting that it was founded in Pulaski back in 1866 before quickly spreading to other Southern states.

“In that sense [these findings] may not be that surprising,” Inwood says. “There’s certainly elements of Tennessee society not comfortable confronting elements of that past, and if you don’t confront the past it’s very difficult to do anything about it in a meaningful way.”

The number of active Klan chapters more than doubled since 2014, rising from 72 to 190 last year. Likewise, black separatist groups increased during the same time period from 113 to 180. While those types of grouped cropped up more often last year, some have waned in support. Not all hate groups are as popular as they once were. Some white supremacists groups such as neo-Nazis and racist skinheads, for example, declined in number.

SPLC researchers figure the overall number of hate groups to be a conservative estimate, noting that many groups are increasingly operating online where there is less risk of exposure and younger people tend to congregate. Potok writes that the online hate forum Stormfront has more than 300,000 members and has been adding about 25,000 new members annually for years now.

Ultimately the number of hate groups may or may not be indicative of the underlying feeling or leaning of the population in a given area. For example, it’s impossible to tell how many members there are in each group or their stature within the community. An interactive map plotting hate groups around the country is online at splcenter.org/hate-map.