Downtown Driving May Be Hellish, But Detours Will Keep Water Flowing - The Knoxville Mercury 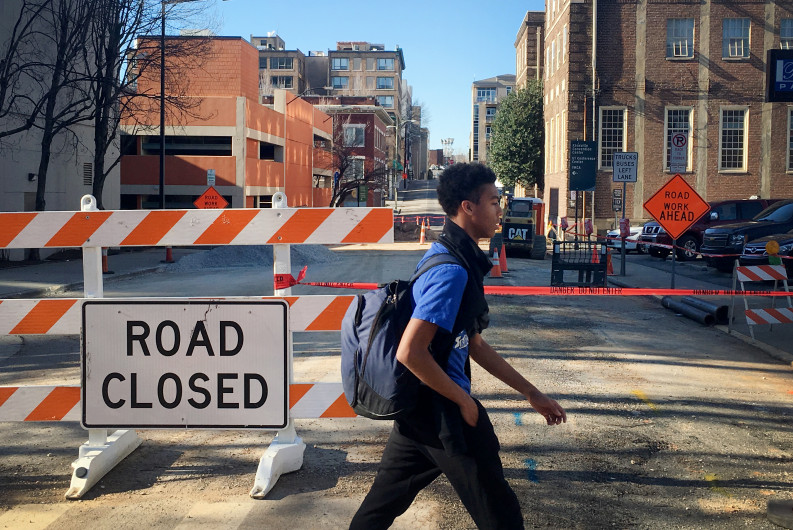 Anyone brave enough to pilot the family motorcoach downtown can likely attest to the perils of road construction. It’s all around us. Detours cordon off major thoroughfares and alleyways downtown; open pits large enough to swallow a whole Prius (and the occasional wandering pedestrian) stretch across intersections and slice into walkways; and at times only thin sheets of metal separate your walking shoes from the unknown abyss stretching below the city surface. Beware!

The construction mess can be a headache and, at times, a bit time consuming as you’re funneled from one one-way street to the next, but city officials say there’s a good reason for all the upheaval. It’s necessary, if not woefully overdue, to replace some of the city’s aging, corroding, and increasingly unreliable infrastructure so many of us rely on.

Best of all, there’s an end in sight. Work is expected to be completed in the spring of 2017. But that’s a full year away, and in the meantime there are plenty of ongoing and pending construction projects inching toward completion. This could very well be Knoxville’s Year of Construction. Work is already underway along Cumberland Avenue in Fort Sanders, where KUB has replaced a ton of infrastructure as part of a city-led streetscape project there. And similar work is poised to kick off along Central Street and Magnolia Avenue sometime in the coming year, although those separate start dates could easily be pushed back into 2017, and estimated construction times vary. KUB currently  has other construction projects all across Knoxville aimed at updating infrastructure.

Many of the utility pipes being replaced downtown are between 80-100 years old and have reached the end of their usable life, Rauhuff says. KUB wants to replace all the pipes at once, not just in downtown but throughout the system. These replacement pipes are made with better material than what was available a century ago, and will (hopefully) last another 100 years. Hence the name Century II.

“We’re preparing the utilities to last another century after lasting a century before us,” Rauhuff says. “Hopefully we won’t be back downtown having to replace aging infrastructure”—at least not for another 100 years!

With the updates, ongoing issues with water main breaks, overflows, and seepage into sewer lines should be thing of the past, he says.

But some folks have taken to social media to contest KUB’s approach to the work, wondering why construction is being done on entire stretches of roadway instead of a block at a time. Rauhuff says the project has indeed been done in phases, but not all of the orange construction cones lining downtown streets are from KUB.

Other constructors include AT&T and the city of Knoxville, who have ongoing construction projects downtown, Rauhuff says. All of those are coordinated with the Knoxville’s traffic engineering department to best address traffic problems and work around special events.

Once KUB has installed the new pipes, the city of Knoxville will repave the roads that were torn up in the process. Until then, watch for mounds of asphalt, metal plates, and potholes.

“We’re working together to hopefully do it as efficiently and cost effectively as possible,” Rauhuff says.

For its part, KUB has put together a blog to track the progress of its work and expected road closures and traffic delays. There’s also a mailing list you can sign up for to receive updates. Email blog@kub.org to get added to the list.

“Hopefully there won’t be any other utility disruption downtown other than new development,” he says. That would mean any future downtown infrastructure work would be a sign of growth.