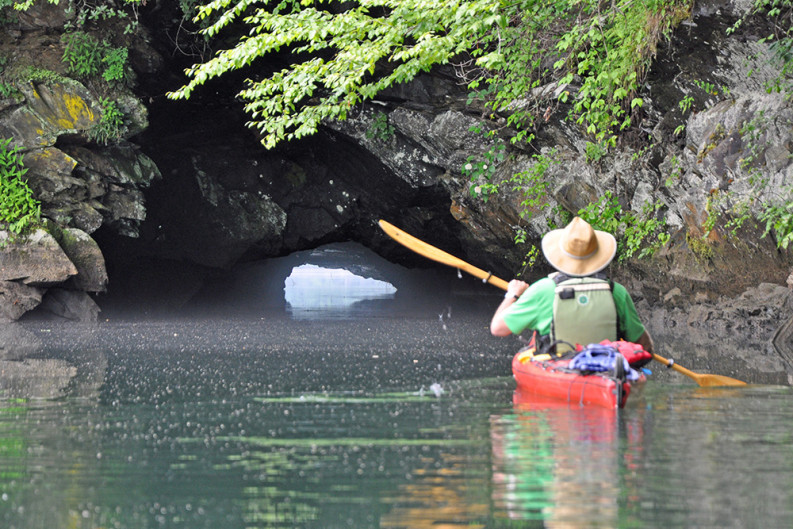 You’ve got a boat and a paddle and a yearning to explore, but you’re not sure where to put in, how far to paddle, what to look for, and what to look out for. What follows are some flatwater destinations for short, out-and-back paddles that don’t require a shuttle. 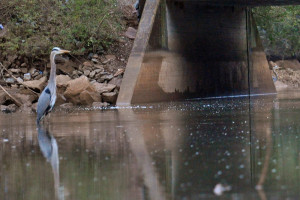 In the heart of Knoxville’s Urban Wilderness, on an island with an air strip, you can put in at an intimate little ramp lined with trees that form a canopy above you. This is Dickinson Island, just downstream from Ijams Nature Center. On out and back excursions, I like to paddle upstream first and then float back down to the put-in. Here, going upstream takes you up a narrow chute between Ijams and Dickinson Island. When you get just past little Otter Island, about a half-mile paddle against the current, you’re at the main channel of the Tennessee River. If you keep going upstream here, you get a unique perspective of Ijams’ boardwalk and Maude Moore’s cave.

How to get there: From Island Home Avenue, veer left onto Maplewood Drive, which turns into Spence Place. This will take you across a small bridge onto the island. Look for the boat ramp on your right.

West Knoxville may not be the first place you think of for peace on the water, but if you go early morning or during the week, you can avoid the big boat traffic and paddle to some pockets of wilderness that have survived sprawl so far. Put in at Fox Marina and you’ve got a paddle of a couple of miles before you pass under the Pellissippi Parkway bridge into the shelter of Sinking Creek. Paddle under Emory Church Road (a low, narrow passage) and on around a bend to a rock wall and a spring, accessible at summer pool. Have your camera ready for great blue heron photo opportunities; they roost there.

How to get there: Take the Westland Drive exit off Pellissippi Parkway and head northeast. Take the first left (Emory Church Road). You’ll cross Sinking Creek. Emory Church Road will veer left under the parkway and turn into Fox Road. Look for the marina on your left about a half-mile from the parkway.

I drove north to the Powell River near Tazewell to find its liminal zone, the place where its current reasserted itself against the pooling effect of Norris Dam. I miscalculated the liminal zone, but the put-in, at the end of Lonesome Valley Road, and the paddle itself, were magical. Going against my usual out-and-back procedure, Norm and I floated downstream to a narrow creek lined with cows and stopped to ogle a trio of American toads engaged in species propagation. The paddle back to the ramp, going upstream, was a good workout in the canoe, but not overly strenuous, and as an early spring paddle, it was magnificent. This is well worth a drive of a couple of hours if you want to see some new landscape with little boat traffic, small or large.

How to get there: After you pass through Tazewell, continue north on 25e. A few miles out of town, turn left at Dogwood Heights Drive. Next, take a right on Goins Chapel Road, followed by a left on Lonesome Valley Road. 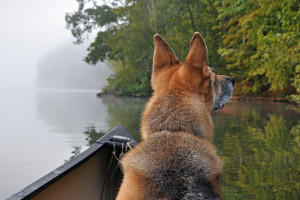 My dog Norm and I visited upper Watts Bar Lake in the canoe one foggy morning and came upon a frenzy of wildlife activity: deer, beaver, horses (not wild), and multiple species of waterfowl including great blue heron, geese, ducks, gulls, cormorants, an eagle, and songbirds. We put in at Johnston Valley Creek boat ramp and paddled across the main channel to the high bluffs, heading upstream to make a 3- or 4-mile loop around marshy Huffine Island.

How to get there: Take the Gallaher Road exit off of I-40 West. Travel south on Gallaher Road (326) and take a right on Highway 70. In less than a mile, look for Old Johnston Valley Road on your left. It’s 4 or 5 miles to the put-in.

My favorite place to put in on Tellico Lake is Harrison Branch, off Highway 129 just a couple of miles downstream of Chilhowee Dam. There are options here. You can paddle straight across past the upstream tip of the mostly submerged island that was once the Cherokee village, Citico. Across the channel you confront a variety of openings that lead you into Citico Creek proper and the Cherokee National Forest. Or, depending on how much water is being discharged, you can go upstream toward the dam and paddle past a marsh and into the mouth Mulberry Creek, both on upstream right within sight of the dam. You can also paddle downstream from Harrison Branch and turn into Fourmile Creek, a trip Norm and I once made after dark.

How to get to Harrison Branch: Take 129/411 south out of Maryville. You’ll pass a Walmart on your left in Fairview. Go through a light or two until you come to a stoplight at a gas station. Take a left there and stay on 129 for several miles. You’ll go through Punkin Center and see a turnoff for Highway 72 on your right. Stay on 129. You’ll climb a hill with sharp curves. Slow down on the descent because the turnoff for Harrison Branch is approaching, just after you break through the trees on your right.

Further up the Little Tennessee River system is Chilhowee Lake, inaccessible at this writing because of a drawdown to repair the dam. When the lake is raised again, Abrams Creek and Tabcat Creek are great places to paddle with easy access near the mouth of each of them.

Calderwood, the next lake up, sees very little boat traffic and has only one put-in that I know about, at Magazine Branch, where you can also camp. Once I saw a couple in a wooden canoe who had camped there the night before and saw a bear swimming across the lake early that morning. When the water’s at the right level you can paddle through an old railroad tunnel that Little River Trading Company’s Greg Rowe led me through one summer.

How to get to Calderwood Lake: Keep going on Highway 129 past Chilhowee Lake and over what is known as the Tail of the Dragon, a curvy road popular with motorcycle and sports cars enthusiasts. You’ll descend into North Carolina and go past the turnoff for Highway 28. Stay on 129. You’ll see Cheoah Dam on your left. At the bottom of the hill, the road will turn sharply to the left and cross the Cheoah River. Before you cross the bridge, there’s a turn to the right that takes you down to Magazine Branch’s boat ramp.

If you like the oddity and quiet isolation of paddling in fog, try the Clinch in the summertime. For an easy out-and-back paddle, put in at the boat ramp at Dismal Creek, which is upstream of Clinton, and in the crook of Eagle Bend. From there you can paddle upstream a couple of miles to Hinds Creek and go up it quite a ways. In the fog, you will hear the traffic on nearby Highway 61 long before you see the bridge.

How to get there: From Clinton Highway (25W), go through Claxton and look for East Wolf Valley Road on your right. A couple of miles down this road, look for Mountain View Road on your left. The boat ramp is about a half mile away. 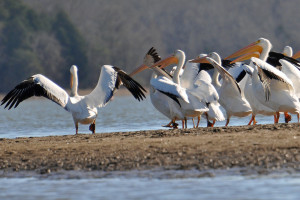 Pelicans are near Hiwassee Island.

To put in on Chickamauga Lake near Hiwassee Island, you’ve got a drive of a couple of hours from Knoxville, but it’s well worth it. Drew Crain, his son Jared and I put in on a warm December day at Blythe Ferry. Not only did we see the famous sandhill cranes but also osprey, hawks, ducks, and geese. (Oh yeah, and pelicans.) In Tennessee. According to Tennessee Wildlife Resources Agency, the sanctuary proper is closed from Nov. 15 through February, meaning you can’t paddle around the entire island, but you can skirt it on the main channel of the Tennessee River.

How to get there: Go south through Dayton on Highway 27. Turn left on Highway 60 and then left on Blythes Ferry Road.

I’m leaving plenty out, such as the Little River, the Holston, and the French Broad—each better suited for shuttles—but the more I write, the more places come to mind. (Go to knoxmercury.com for the Powell River.) It’s time to close the laptop and load the boat.