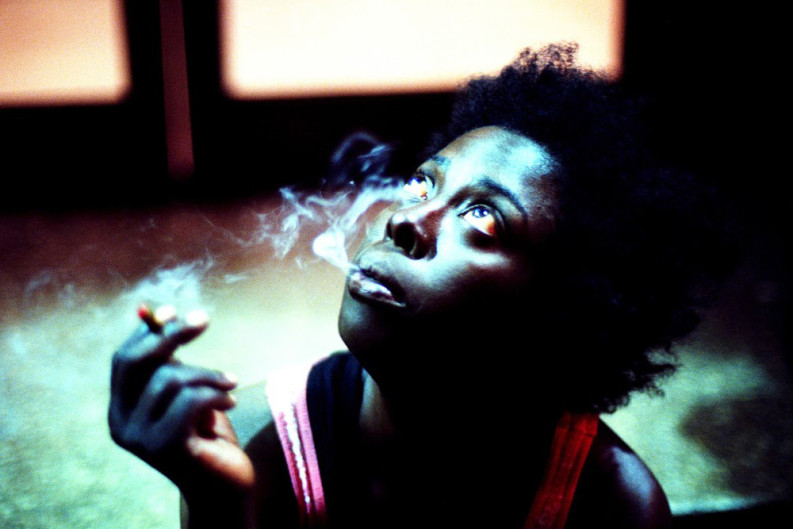 When’s the last time you watched something that you’ve never really seen anything else like? That’s the rare and bracing experience that Field Niggas offers. Part experimental documentary, part audio-visual poem, photographer Khalik Allah’s hour-long film captures a series of summer nights on the corner of 125th Street and Lexington Avenue in Harlem in the summer of 2014. It also captures the people who inhabit it, or pass by, in an unpredictable and revelatory way. In case it needs saying again, you’ve never seen anything like it.

The film opens with the sound of voices—some arguing—layered over slow-motion footage of what appears to be people on the nod, mid-narcotic liftoff, dreamy in that frozen sway familiar on certain street corners everywhere. But the imagery shifts away from the users to a woman’s face, eyes boring into the lens. A pair of hands running over the straining surface of a bare, pregnant belly. All in slow-motion. And all the while, voices are talking, but no lips are moving onscreen, or at least not in any way that corresponds with what you’re hearing on the soundtrack.

That non-sync sound disconnect continues through to the end credits. The subjects before Allah’s camera are constantly talking, rapping, singing, arguing, answering questions, and asking them, too, but you never get anything like a traditional documentary talking head. You never get a formal introduction to anyone involved, either. You hear their voices, and a bit of their stories, and you see their faces. You begin to figure out that, much of the time, the person you see on screen is the person whose voice you hear. But the dislocating effect holds true nonetheless.

Field Niggas also offers a disconnect between the kind of urban life many outsiders are happy to make assumptions about and the realities of the people who live it. One man boasts that he is “in the game,” part of the illicit hustle of the street, but he pairs that proud announcement with another—that he’s written two novels. There’s a lot of talk about crime, of rolling anyone foolish enough to fall asleep, and of selling and consuming drugs, but there are also many avowals of the straight life, and much discussion of wisdom and teaching. There are men with hard, hard faces, with eyes obliterated beneath jagged scars, with scabby legs. There are beautiful young women, smiling dreamily into Allah’s camera, or pushing strollers, their eyes only slightly smaller and less trusting than their toddlers’.

Allah remains a documentarian. He turns several times to the neighborhood cops, benignly, but he also examines their antagonistic relationship with the people on the corner. He invokes Eric Garner, the Staten Island man who died at the hands of police that summer. And he captures the pervasiveness of drug use, and of its effects. K2, synthetic weed, is such a fact of life in the neighborhood that one subject named her dog “K2.” But subjects tangled up with more serious chemicals—alcohol and opiates—make clear the devastating effects of such a life. One man confesses that he only eats about three times a week. One unseen woman asks Allah to stop filming her so she can ask a question. When he lowers his camera, presumably, she pauses before asking, “Do I look okay?” His halting, equivocal answer makes her question all the more heartbreaking.

But Allah is also clearly conscious of the fact that he’s not a traditional documentarian. His booming voice appears all over the voice-over, and he captures himself and his SLR camera looming in mirrors far too often for it to be an accident. While Field Niggas never exerts itself toward beauty, it finds it nonetheless, in the gleam of the rain-slicked streets, in the festive police-car bubble lights, and in the wall-to-wall unblinking takes of faces staring into his lens. He knows he’s making art, too. In one of the film’s funniest moments, a young woman tells him he needs to take his project downtown, to Chelsea or the Lower East Side. “People down there, like, love stuff like that—black people and drugs,” she chirps.

Perhaps the closest analog to what Allah does here lies in the work of Terence Malick, of all people. Malick has developed a technique where he films scenes featuring actors twice, once with dialogue, and then once without. He then cuts the two versions together, letting the unspoken work of the actors’ faces, and his frequent use of voice-over, expand on traditional he said/she said. And while Allah arrived at the technique he uses here through the clash between camera sound and his dedication to slo-mo, it functions in much the same way. By rejecting traditional documentary narrative—this is a direct, unaltered representation of facts—he also tacitly rejects the traditional narrative of “inner-city life.” His intimate but abstract portraits of people who are somebody, and at the same time anybody, finish his work for him.