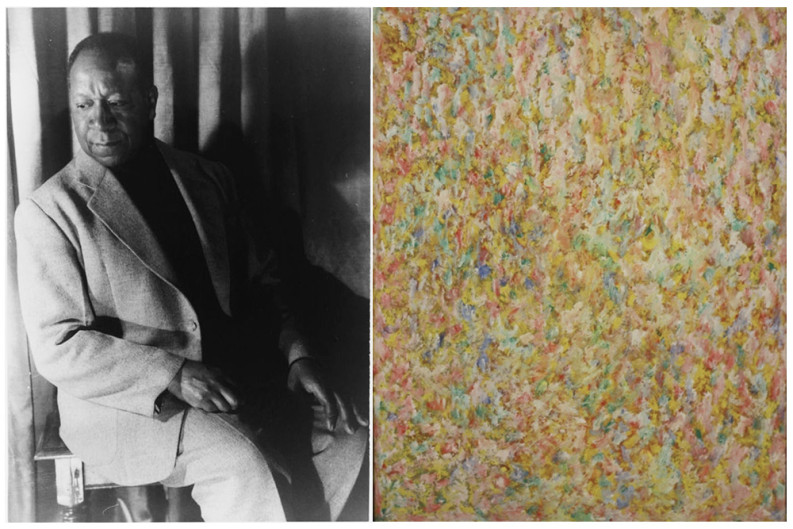 Beauford Delaney (1901-1979) is the best-known artist who ever lived in Knoxville. This month, he is the subject of a big show in a well-known gallery in Paris.

He was born in a small wooden house on East Vine Street. The Delaney home was near where the Weigel’s on Summit Hill Drive is now. His father was a barber, who cut hair in the family home, and also a Methodist preacher.

Beauford grew up going to black public schools, the Green School and Austin High (the forerunner to Austin-East), which was on Central Street, downtown. He always loved to draw, even in school, and one of his early works was a portrait of Charles Cansler, who was then the principal of Austin High.

As a teenager, he found work as a sign painter. He impressed the elderly Lloyd Branson, Knoxville’s most successful artist of the time. Branson had a studio on Gay Street about where the Tennessee Theatre lobby is today. Branson offered to give him lessons in painting if Beauford would help him mix paints and help out in the studio.

Branson’s long career in art is currently the subject of a show at the Museum of East Tennessee History.

Delaney did very well, and in 1924, when Beauford was a young man, his friends, including Lloyd Branson and another painter named Hugh Tyler (uncle of the writer James Agee) helped pay his way to study art in a school in Boston.

At the end of the period known as the Harlem Renaissance, Delaney became known for his portraits of several major figures, including W.E.B. DuBois, Duke Ellington, Louis Armstrong, and W.C. Handy. He became close friends with writers Henry Miller and James Baldwin.

In 1930, when Delaney was still in his 20s, he put on a big show at the Whitney Museum of American Art in New York.

He returned to Knoxville for a visit in 1950. Three years later, he moved to Paris. There he became more interested in abstract expressionism. It was, as his friend James Baldwin wrote, “a metamorphosis into freedom.” Delaney’s exuberant oils with vibrant colors have earned him a reputation as one of America’s greatest black abstract expressionists.

Meanwhile, his younger brother Joseph (1904 -1991) also became a successful painter. In 1938, a newspaper article had predicted that the Delaney home in East Knoxville would one day be hailed as a historic site, the birthplace and childhood home of two famous artists. Their brother Samuel, who was a barber, lived there for many years. However, it was torn down with all the other houses in the neighborhood in the 1960s, during urban renewal.

Delaney last visited his hometown of Knoxville in the winter 1969-70. Later, his brother Joseph moved back to Knoxville to work as an artist in residence at the University of Tennessee. Very different in style from his older brother, Joseph Delaney was known for his scenes of parades and street life, especially in New York.

A revival of interest in his work began in the 1990s, when scholar David Leeming published a biography of Delaney called Amazing Grace: A Life of Beauford Delaney (1998).

His work has been shown in private galleries in Paris, and his paintings sometimes sell in the six figures. The new show of 40 Delaney works from his Paris years is at Reid Hall, a gallery on the Boulevard de Montparnasse associated with Columbia University in New York. Earlier this month, 11 Knoxvillians associated with the Knoxville Museum of Art were among the 300 who attended the preview, which is called a vernissage.

The KMA in Knoxville has several Delaney paintings on exhibit in its Higher Ground exhibit, including his 1964 abstract, “Scattered Light.”

Wednesday, Feb. 24 at noon, at the East Tennessee History Center, KMA curator Stephen Wicks, who attended the Paris opening, will give a “Brown Bag” presentation about Delaney’s remarkable career.