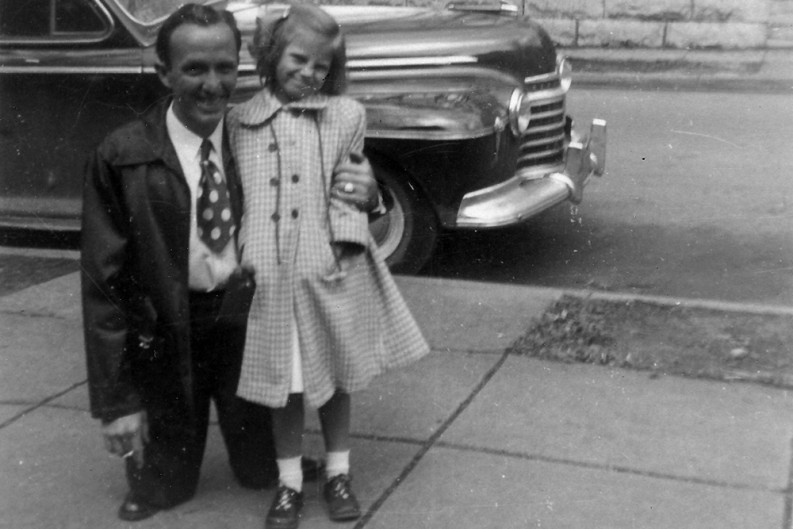 In the early 1950s, Robert Van Winkle, who performed as Little Robert, was making a good living as a radio entertainer and country musician in Knoxville. A regular performer on Cas Walker’s WROL show, he also played a lot of road gigs, sharing a stage with legends such as Bill Monroe, the Osborne Brothers, and Hank Williams. But he ran into some bad luck, too, culminating in a tragic event that unfolded at his home.

On the evening of Monday, Jan. 31, 1955, Van Winkle visited Eva’s Grill on Rutledge Pike. He was in the company of Eva’s estranged husband, Roy Porter, a tourist-court manager and country-music radio performer, whom Eva was suing for divorce. Van Winkle offered Porter his couch for the night. Around 1:30 a.m., Knoxville police officers Lester “Tarzan” Gwinn and Robert Stephens stopped by the house on East Scott Avenue to question Porter following a complaint of abuse and harassment from his wife. After a brief verbal exchange, Porter drew a pistol and fired on the officers. They pulled their weapons and gunshots were exchanged over the bed on which Robert’s wife, Margaret, and three of their children were lying. Gwinn and Porter were both shot five times. Porter died on the scene.

Dewey Jackson, a former police chaplain who lived next door, entered the house after the shooting had stopped and knelt beside Gwinn, who told him, “Preacher, I have got it. This is it, I am gone.” Van Winkle told the Knoxville Sentinel that Gwinn then called him over, apparently mistaking him for Stephens, and said, “Tell my wife I love her, and tell the fellows to look after my family for me.” Gwinn, 40, died on the operating table at Knoxville General Hospital a few hours later.

The Van Winkles’ lives were understandably complicated after the incident. Sensationalistic stories ran in the local papers. Gwinn was much beloved in the community, and all the reporting on Porter made him out to be a rather unsavory character. Van Winkle’s public defense of his friend hurt his reputation. Cas Walker was so upset by the incident that he fired Little Robert from his show. (He would later rehire him.) City directories show the Van Winkles changed residences annually during their time in Knoxville, all within a few miles of East Knoxville. Robert is first listed in the city directory in 1953, living on Hoitt Avenue and working for the TVA & I Fair. Following the shooting, the family moved across the street from the house where the shooting occurred, but by his last year in Knoxville, 1963, Robert had moved his family back into to that very house on East Scott.

Though Little Robert continued to perform, in Knoxville and on the road, changes in entertainment tastes meant gigs were becoming harder to come by. In 1963 Robert returned to Ohio, moving his family around several small towns before finally settling in Bethel, where he had been so mercilessly teased as a boy. He continued to perform in small taverns around the area and even hosted a radio show on WSRW. There he spun classic country tunes, told corny jokes, and hosted live performances, which often featured himself and “Mrs. Little Robert.”

A few of these radio shows are preserved on the seven or so hours of reel-to-reel audio tape that Van Winkle’s granddaughter Robin Bradley donated to the Tennessee Archive of Moving Image and Sound. More revealing, however, are the home recordings of Robert and his family that make up the bulk of the material. Between conversations on politics (Watergate was freshly on their minds) and religion (Catholic, but open to others’ belief systems) are family jam sessions that cover country, folk, and bluegrass tunes. Robert holds court, but his wife, teenage son, and daughter can be heard as well, the latter delivering a plaintive “House of the Rising Sun.” Plenty of old-time country and obscure numbers appear alongside more popular Woody Guthrie and Carter Family songs. Robert’s favorite singer and songwriter, Hank Williams, is played the most, however, with the whole family joining in on an exuberant “I Saw the Light.” Obviously an attentive, long-time student of Williams, Robert even sounds like Hank at times.

Though photographs and home video show Robert still picking and singing into the 1980s, they also reveal his health declining markedly. He died on Oct. 12, 1988, at the age of 65. His death certificate lists sarcoma of the lungs as the immediate cause, and cirrhosis of the liver, emphysema, and cardiovascular disease as other significant conditions.

Robert Van Winkle was a naturally gifted and talented performer. It’s unfortunate that he never made a studio recording, and the Gwinn and Porter killings seem to loom over his music career, obscuring his gifts. Cormac McCarthy references the incident in his 1979 novel, Suttree, though he changed Gwinn’s name to Tarzan Quinn and names “the fiddler Little Robert” as his murderer, rather than Porter. The killings so haunted Cas Walker that he brought it up in one of his autumnal rambling monologues on the Farm and Home Show just a few months before he would retire from the air in April 1983. Walker also took fictional license, though probably unwittingly, claiming the shooting stemmed from “an argument over me,” and also insisting Porter wrote Ernie Ford’s hit “Sixteen Tons.” Walker also said Little Robert told him what really happened the night of the shooting, but he was not going to repeat it.υ