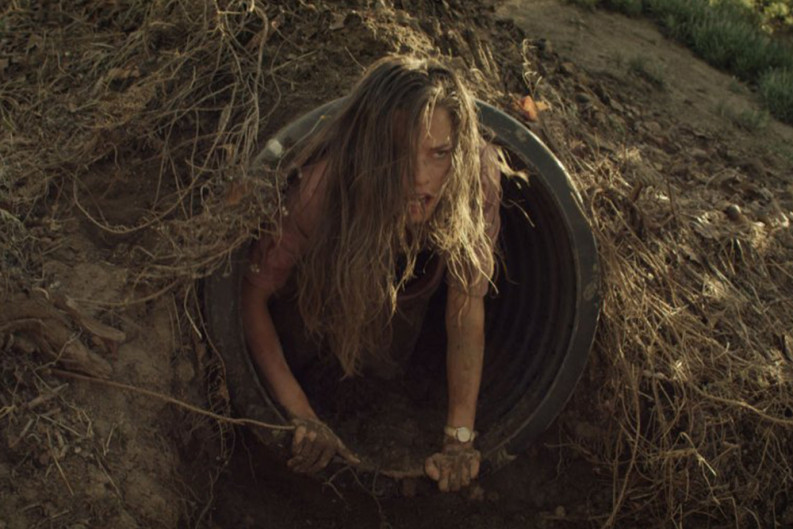 You know that thing where film nerds freak out over the fact that some hapless Hollywood studio is doing an American remake of some foreign gem? Almost always completely justified. Not the freaking part, necessarily, but the frustration and disappointment latent in the process of taking a perfectly good piece of cinema and giving it a coat or two of our trademark patina of cheese and simpiness. And it’s even worse when there’s something genuinely button-pushing about the source material. Case in point: the recently remade Martyrs.

As in the 2008 French shocker, the remake opens with the escape of a bloodied little girl from nameless, faceless captors. Lucie ends up at an orphanage, brutalized, haunted by her experience, and reachable only by fellow orphan Anna. Jump ahead 10 years to Anna (Bailey Noble) receiving a phone call from Lucie (Troian Bellisario), who has just shotgunned to smeary bits the nice, middle-class nuclear family whom she swears were responsible for her scarring captivity. Anna hurries to their remote house to come to her friend’s aid, but is Lucie a vengeful victim, or a psychotic murderer?

Up to this point, directors Kevin and Michael Goetz shadow Pascal Laugier’s original, even recreating many of the same shots. But Mark L. Smith’s screenplay soon diverges in ways that, while they don’t veer from the general thrust of the plot, go a great distance toward subverting its essence, and not in a way that fans of the original will be happy about.

It’s tough to own being a “fan” of Martyrs. But it elevated the leering Grand Guignol spectacle of that particular era of extreme shock cinema (see also: the first The Human Centipede, A Serbian Film) in ways that were both surprising, and surprisingly existential. It is the 2001: A Space Odyssey of bloody-tanktop gorno, a work where things take a sharp left at a certain point (no spoilers here) and keep picking up speed from there.

The American remake attempts to do the premise justice—but with a heart. And that is pretty much the last thing it needs. It lavishes screen time on the bond between Lucie and Anna, and then extends that bond through parts of the plot that it never dared, or needed, to tread before. It uses little girls for sympathy in a way that seems to sit at odds with its grim business. And it infuses the late going with a religious tint that, frankly, seems like an easy out from Laugier’s unblinking take. The original still seems like just that, an original, while the remake is a pale copy. Whatever spark flickered in Laugier’s eyes is just a glassy reflection here.