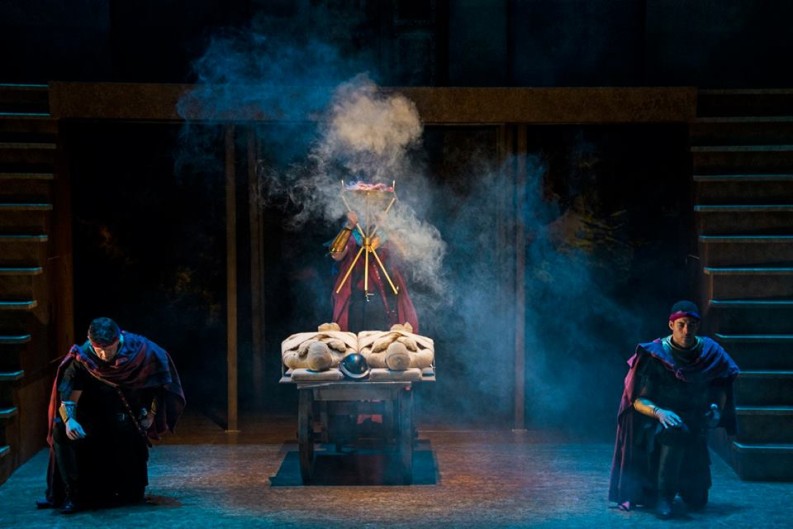 With a tally of 14 deaths by various means, plus bodily mutilation, rape, and cannibalism, one might assume that William Shakespeare’s play Titus Andronicus is little more than a violent bloodbath written at a time when revenge drama was popular on the Elizabethan stage. Indeed, recent productions at London’s Globe Theatre have become known for the numbers of audience members fainting or exiting the theatre in distress at the sight of gore and the depiction of violence. In contrast, the current Clarence Brown Theatre production of Titus Andronicus, which opened last weekend, has apparently taken pity on potentially squeamish audience members and delivered a kinder, gentler version. On opening night, one was more likely to hear a stifled snigger or two than a gasp of horror.

Although Titus Andronicus followed the histories of Henry VI and Richard III early in Shakespeare’s career, the story is fictional. In it, the Roman general Titus Andronicus and his sons have returned to Rome following their victory over the Goths. With captives in tow, including the Goth queen, Tamora, Titus and his family fall victim to the universal truth that revenge breeds revenge.

Titus Andronicus is not the Bard’s most accomplished work, from a poetic standpoint. That’s probably one reason many productions go for a contemporary approach or launch headlong into blood and gore as if it was a Shakespearean version of From Dusk Till Dawn. CBT director John Sipes, however, has followed a different path, deliberately preventing the audience from accepting the play as realism. The set, consisting of platforms and steps designed by Christopher Pickart, is almost overly spacious and visually minimal, while most of the action has been pushed discreetly upstage, away from the audience. Similarly, with a few gorgeous, shadowy exceptions, Kenton Yeager’s lighting is broad and diluting, leaving little to the imagination and presenting gory details antiseptically. Bill Black’s dark, muted costumes mix modern details with anachronistic period styles. Even props—corpses, severed hands and heads, slices of “meat” pie—appear intentionally theatrical. One nod to modern theatrical practice—and a tremendously effective one—was the use of projections to symbolically illustrate dripping and smearing blood.

At the head of the large cast was the commanding presence of Kurt Rhoads as Titus Andronicus. Rhoads, making his CBT debut, energetically pulled off the impressive character arc that flows from hardened general to deceived father to contrived madman to the inevitable tragic end. Carol Halstead was enticing as the beautiful but vengeful Tamora, queen of the Goths. Andrew Drake, last seen and admired in CBT’s Of Mice and Men, brought a delicious evil to the role of Aaron the Moor. Charles Pasternak gave his Saturninus, the newly crowned emperor, a slimy shallowness that was simultaneously comic and scary. Lindsay Nance, as Titus’ daughter, Lavinia, made the remarkable transition from beautiful young lover to the mute victim of rape and mutilation. Two actors remarkably left standing at the final curtain were the always solid CBT faculty regulars Terry Weber, as Marcus Andronicus, and David Brian Alley, as Lucius.

Making a subtle contribution, the interwoven music and effects of CBT composer and sound designer Joe Payne were once again impressive. At times understated and suggestive, while at others bold and presentational, Payne’s audio support was an indispensable part of the character of the production.

While Titus Andronicus has probably seen more stage time in the last 25 years than in all the previous years since its premiere in the 1590s, productions are still relatively rare. For that reason alone, theater lovers will want to catch this one.

Clarence Brown Theatre’s production of Titus Andronicus runs through Feb. 28. Tickets are $32, with discounts for students and seniors. Visit clarencebrowntheatre.com for information.