Support the 'Mercury' and WDVX at Knoxtacular, an All-Day, All-Local Benefit Variety Show - The Knoxville Mercury

Well, we’ve made it this far—it’s been almost a year since we published the first issue of the Knoxville Mercury, and that seems like an occasion worth celebrating. So in a few weeks we’re teaming up with WDVX to host Knoxtacular, an all-day, all-live, all-local variety show promoting the many varieties of Knoxville art, culture, and entertainment—and supporting local independent media.

Yes, Knoxtacular, scheduled for Saturday, March 5, at the Bijou Theatre, is a benefit for WDVX, the Mercury, and the Knoxville History Project. (Knox Heritage donated the use of the theater for the night to our cause.) It seems like we’ve been asking for money in one form or another—through Kickstarter, other donations, advertising, sponsorships, our League of Supporters program—since Metro Pulse was shut down in 2014. It’s a new dimension of the newspaper business for most of us here. The Mercury model—a not-for-profit publication supported by a 501(c)(3) nonprofit organization, in our case the Knoxville History Project—is an unusual one. The way we work now has more in common with public radio than with traditional for-profit magazines and newspapers.

Our readers have responded, enthusiastically—we raised more than $60,000 through Kickstarter to help get the paper up and running, and gifts large and small have continued to come in since we started publishing. But your support is still needed! Fundraising efforts like Knoxtacular are an essential part of how newspapers like ours work now. If you value local independent media, make plans to attend Knoxtacular next month. We’ll have a full day of music and more on the Bijou’s historic stage—all local, of course. (We’ll announce the lineup soon.) If you can’t make it, tune in to WDVX that day—they’ll be broadcasting live from the Bijou for most of the day and will accept donations online and by phone.

We’ll be asking for a $10 donation at the door. (Feel free to give more, of course.)

Invite all your friends!

We’ll also have contributions from Kathryn Frady Marvel of Marble City Opera, Brad Reeves of the Tennessee Archive of Moving Image and Sound, local photographer and man about town Bill Foster, and the reliably unpredictable Jack Rentfro. Poets Liam Hysjulien, Black Atticus, Dawn Coppock, and Marilyn Kallet will read their work from the stage, and since Jack Neely has a stake in this, we’ve roped him into it, too. Former WUOT morning host Chrissy Keuper and Victor Agreda Jr. (comedian and “Knoxville’s one and only tech media star,” according to Coury Turczyn) will serve as emcees. And there’s much more still to be announced!

New additions to the lineup!

Here’s the schedule — please keep in mind that performance times are approximate and subject to change! 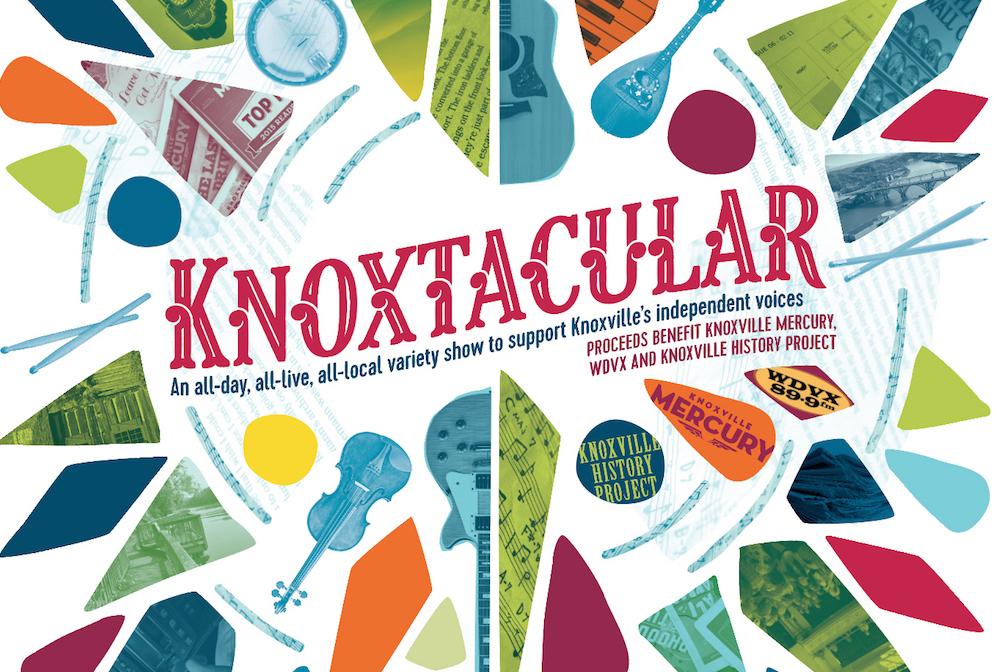